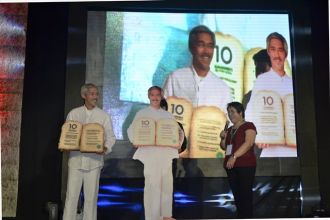 Now, Filipinos from every walk of life can find ways to get healthy and be nutritionally well by following very simple guidelines drawn up by the National Nutrition Council (NNC) of the Department of Health (DOH).
The “10 Kumainments” -- a campaign to promote the Nutritional Guidelines for Filipinos (NGF) -- was launched by the NNC at the “3rd National Conference of Nutrition Action Officers" held at the SMX Convention Center in Pasay City on October 23, 2014.

The 10 Kumainments are the popularized versions of the NGF approved by the NNC Governing Board chaired by Health Secretary Enrique T. Ona to promote a healthy lifestyle among Pinoys. The nutritional guidelines aim to address and prevent malnutrition and diet-related non-communicable diseases such as cancer, diabetes and cardiovascular diseases.

The 10 Kumainments are simple and easy to remember guidelines that can be easily followed by ordinary citizens to improve their nutritional status. With messages like “Kumain ng iba’t ibang pagkain”, “Kumain ng gulay at prutas araw-araw”, and “Panatilihin ang tamang timbang”, individuals are encouraged to eat the right foods, exercise regularly and pursue a healthy lifestyle in 10 easy rules. The messages will be aired on TV and radio stations nationwide.

A campaign character, Moises Dalisay also known as "Mang Moi", was also introduced at the launch. Patterned after Moses or Moises of the Bible story who handed out the Ten Commandments, the friendly “Mang Moi” crusades for the “10 Kumainments” that Pinoys should follow for better nutrition.

“We encourage all the Nutrition Action Officers in the country to help disseminate the 10 Kumainments up to the barangays and to every household so that they can contribute in influencing proper nutrition behaviours and be able to help reduce malnutrition in the country,” said Jovita Raval, NNC Chief of the Nutrition Information and Education Division, who led the national launch.

The NGF was developed by the interagency and multi-sectoral Technical Working Group on the Nutritional Guidelines for Filipinos chaired by the Food and Nutrition Research Institute of the Department of Science and Technology (FNRI?DOST). The NGF also underwent multi-sectoral consultations. The NNC was tasked to disseminate the NGF nationwide to ensure its adoption among Filipinos to contribute to improved nutrition.

The launch was attended by Nutrition Action Officers from all over the country who are also expected to help in the dissemination of the 10 Kumainments in barangays nationwide. The 3rd National Conference of Nutrition Action Officers had for its theme, “I Need You NAO and Forever” and held sessions that covered results of the 8th national nutrition survey conducted by FNRI-DOST in 2013, and updates of the various programs and initiatives from NNC and its partner agencies.