Republic of the Philippines
Department of Health
NATIONAL NUTRITION COUNCIL

Today is another important year in the life of the National Nutrition Council as we celebrate our 41st founding day. As a testament of NNC’s quest for excellence, the NNC is proud to have another laurel in its cap, the ISO 9001: 2008 certification. It was in late 2013 that we started our Quality Management System journey to ISO and finally after two years of going through fine-tuning our processes and systems, we receive the reward of the ISO certification.

But even before we began the ISO journey, the NNC has always strived to achieve excellence. For one, our mass media programs to promote nutrition, have received numerous awards from prestigious award-giving bodies. Recently, we learned that our radio program, Katumbas ay Biyaya aired over DZRH enjoys a very high listenership, even beating the country’s two major radio stations, DZMM and DZBB over the same time slot and broadcast day.

The results of our client satisfaction survey revealed that 97% of our clients rate the NNC as satisfactory or better. In terms of fund utilization, we have in the past three years surpassed our budget utilization rate as well as our physical targets. And as evidence of this successful performance, DBM has approved the inclusion of NNC in the roster of national agencies authorized to receive this year’s Performance Enhancement Incentive not in the amount of Php5,000, but the equivalent of a one-month’s salary.

Speaking of DBM, we have been entrusted by the Secretary of the Budget and Management, Secretary Butch Abad to spearhead a three-year program starting 2016 on early childhood care and development with focus on the first 1000 days of life. This is in recognition that nutrition plays a key role in shaping the child’s and our nation’s future. And so we look forward to more challenges ahead with the implementation of this program.

Not only does NNC strive excellence for the Secretariat, but the NNC also recognizes excellence in nutrition service delivery. NNC continues to provide awards to local government units as well as our field volunteers, the barangay nutrition scholars. We have also recognized long-serving nutrition implementers, the D/CNPCs, NAOs and BNSs and soon, provide them some cash incentives as well.

We have also recognized the NNC staff and regions that have provided important inputs to ensuring that the NNC website provides quality information to our online clients.

I would also like to recognize our three service awardees who have rendered 30 to 35 years of their public, professional lives in service of the NNC.

All these accomplishments and recognition would not be possible without the commitment and dedication of the members of the NNC Secretariat. For what is NNC if not for its human resource? Despite all the work given to us, we continue to deliver our outputs, excellently.

I also thank our contractual staff for joining the NNC Secretariat in all the work, work, and more work. I hope that Director Boy Llacuna of CARAGA and Director Moni of Bicol, as new members of the NNC family, will also work with us and provide their friendship, support and commitment.

With our 41st anniversary theme “Certified ISO na ang NNC – Certified Quality!”, let us be proud and continue our quest for quality and excellence. 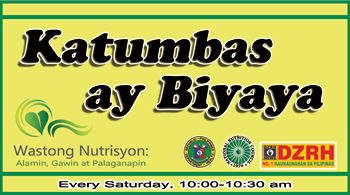 One Nutrition One Nation 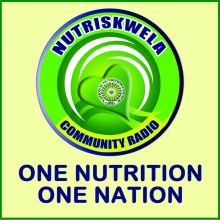 The Nutriskwela Community Radio Project of the National Nutrition Council was born of a need for a long-term and cost-efficient strategy to address the problem of hunger and malnutrition in the Philippines in conjunction with current anti-hunger and anti-poverty programs of government.

A brain-child of NNC Executive Director, Assistant Secretary Maria-Bernardita T. Flores, the Nutriskwela Community Radio Project involves the setting up of non-profit, non-partisan community radio stations and the training of broadcast personnel in areas of the country with high malnutrition prevalence and which do not have easy access to broadcast media.

Nutriskwela Community Radio aims to empower the community through the dissemination of correct and up-to-date nutrition and health information, as well as educational and developmental information from all relevant sectors of the community, government agencies, and non-government organizations.

The first phase of the project was implemented in 2008. In partnership with the respective local government units, five community radio stations were established:

The establishment of these radio stations would not have been possible without the support of the National Telecommunications Commission (NTC) for providing NNC the necessary licenses to operate and other permits NNC was likewise assisted by its partner, MQ Mediazone Productions.

In a pioneering effort, all of these 15 Nutriskwela Community Radio stations are connected to the Internet. Each radio station is enabled to communicate and interact with their local constituents and with the world.

The National Nutrition Council and the United Nations Children’s Fund, in partnership with the Global Nutrition Cluster held a training on cluster coordination in the context of nutrition in disaster risk reduction and management last 3-5 July 2014 at the Bayview Park Hotel.

The training aimed to provide a clearer and better understanding of the cluster approach to enable the Philippine Nutrition Cluster to carry out its functions to ensure a predictable, timely, coordinated and effective nutrition response to disaster-affected populations.

About 35 participants attended the training, and included all the NNC regional nutrition program coordinators or their representative; selected staff from the NNC central office, and selected members of the Philippine Nutrition Cluster, specifically, UNICEF, Action Contra La Faim (ACF), World Vision representing the Philippine Coalition of Advocates for Nutrition or PhilCAN, and Save the Children.

The training involved interactive learning sessions on the context of the Philippine Nutrition Cluster; humanitarian reform and transformative agenda; the cluster approach; humanitarian programme cycle from assessment to planning to implementation to monitoring; cluster coordination performance monitoring; and accountability to clients.

Participants had a glimpse of both international and local standards and protocols for a coordinated nutrition response in emergencies from the speakers of the Global Nutrition Cluster, Dr. Ayadil Saparbekov, and Dr. Anna Ziolkovska; National Nutrition Council, Ms. Maria Lourdes A. Vega, and Health Emergency Management Bureau of the Department of Health, Dr. Ronald P. Law. True to the Welcome and Opening Remarks of Assistant Secretary of Health Maria-Bernardita T. Flores, discussions provided inputs for participants to reflect and determine “how the nutrition cluster at various levels can adopt or adapt key processes to further improve and strengthen the performance of the cluster and in the process prevent a worsening of the nutrition situation”.