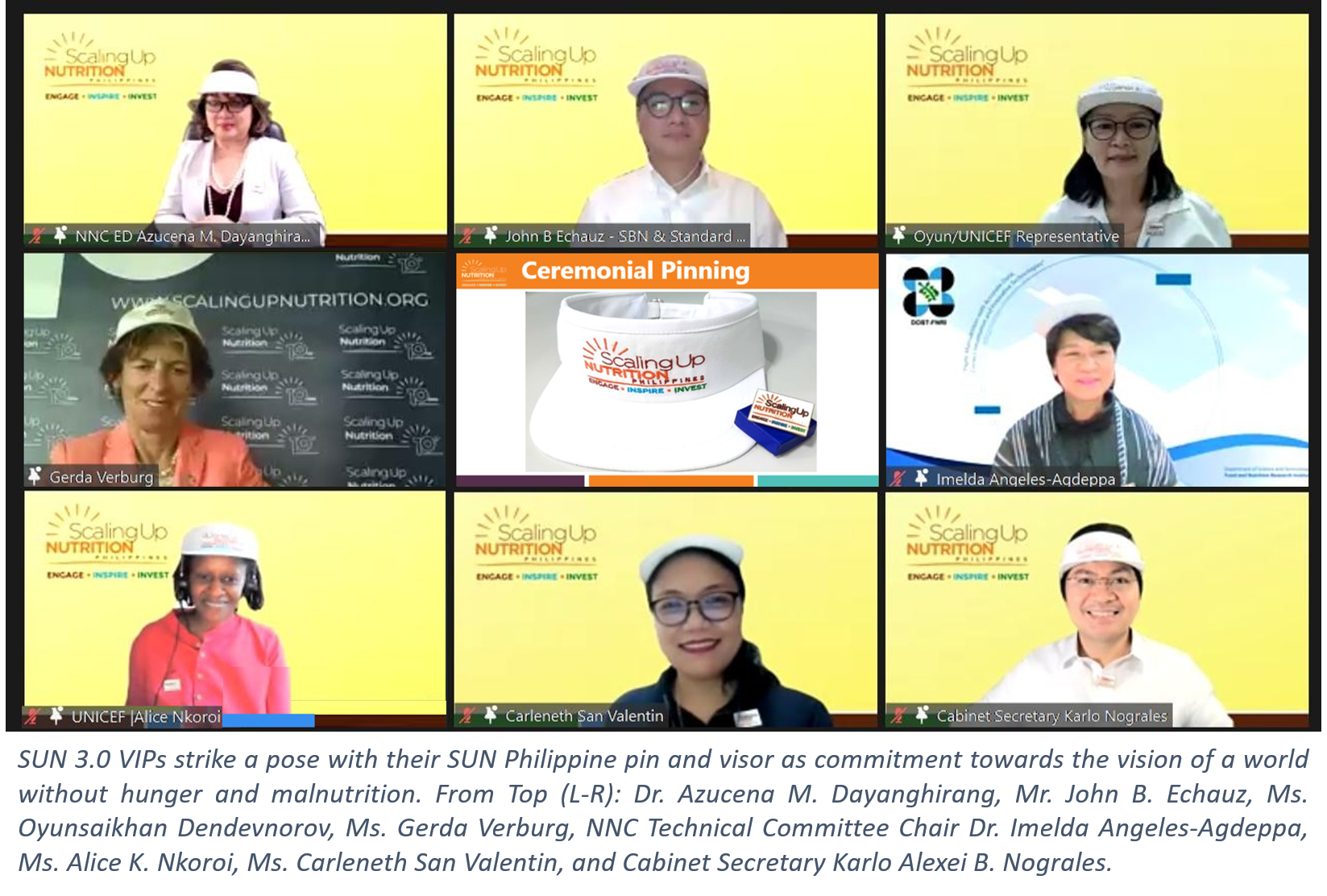 The Philippines is the first country in Southeast Asia and the Pacific to launch the SUN Movement 3.0 strategy. The launch is a success, with almost a thousand local and international nutrition stakeholders gathered on 02 June 2021 via Zoom and Facebook Live to witness the event.

The SUN Movement is founded on the principle that all people have a right to good food and good nutrition. It brings together governments, civil society, the United Nations, donors, businesses, and academe into a collective effort to improve nutrition. The Philippines, through an NNC Governing Board resolution in 2014, approved the country’s registration to SUN. Since then, the Philippines has been continuously active in all activities of the SUN Movement and in strengthening its networks. NNC Executive Director Azucena M. Dayanghirang is an active member of the SUN Executive Committee.

In 2016, the Movement shifted towards the 2nd phase to achieve the World Health Assembly targets by 2025. The shift to SUN 3.0 strategy will focus on empowering countries to take the lead and to accelerate the achievement of the vision of ending ALL forms of malnutrition, considering the new challenges and changes in the current context. Realizing that malnutrition is a multisectoral concern, the shift promotes “systemic” change at the national and sub-national levels through collective and coherent actions. In SUN 3.0, every individual in SUN countries takes greater role as key agents for change, ensuring that commitments are aligned with country priorities and translated into sustainable actions and results. NNC hopes to expand the membership of the SUN networks to not just at the national, but also at the sub-national levels.

Distinguished personalities from the different networks of the SUN Movement Mr. John B. Echauz of the SUN Business Network, Ms. Carleneth F. San Valentin of the SUN Civil Society Alliance, and Ms. Alice K. Nkoroi of the SUN Development Partners Network, graced the panel discussion on “SUN 3.0 towards ending malnutrition”. The stakeholders, together with NNC Executive Director Dr. Dayanghirang representing the government SUN focal point, talked about the progress, achievements, and challenges during Phase 2 of the SUN Movement, as well as their plans for the roll-out of SUN 3.0. UN Assistant Secretary General and SUN Movement Coordinator Gerda Verburg moderated the discussion.

A ceremonial pinning of the SUN Philippines logo followed the panel discussion to seal the commitment of the stakeholders towards ending hunger and malnutrition by 2030 through the application of the SUN strategy. The wearing of SUN Philippines visor, on the other hand, symbolizes the role of the stakeholders as SUN Movement members and advocates. The seven rays of the sun are our individual commitment to the vision of a world free from hunger and malnutrition and to spread these rays to others’ visor.

Scale up nutrition through
Collective action
Allocate priority investments,
Leadership and governance,
Enhanced actions for accountability and sustainability,
Uptake of communities, and
Partnership within networks.

Nutrition champions Health Secretary and NNC Governing Board Chair Dr. Francisco T. Duque III, Cabinet Secretary and SUN Adviser for the Philippines Atty. Karlo Alexei B. Nograles and UNICEF Representative to the Philippines Oyunsaikhan Dendevnorov were also present to deliver their respective words of steadfast support and commitment to the SUN Movement 3.0.

NNC Executive Director Dayanghirang ends the launch with a message that “Actions to address malnutrition will only be successful if we are able to address the systemic drivers such as poor health, socio-economic and environmental vulnerabilities, among others” and “No single sector can address the multifactorial problem of malnutrition...by joining hands, we will achieve things faster”.