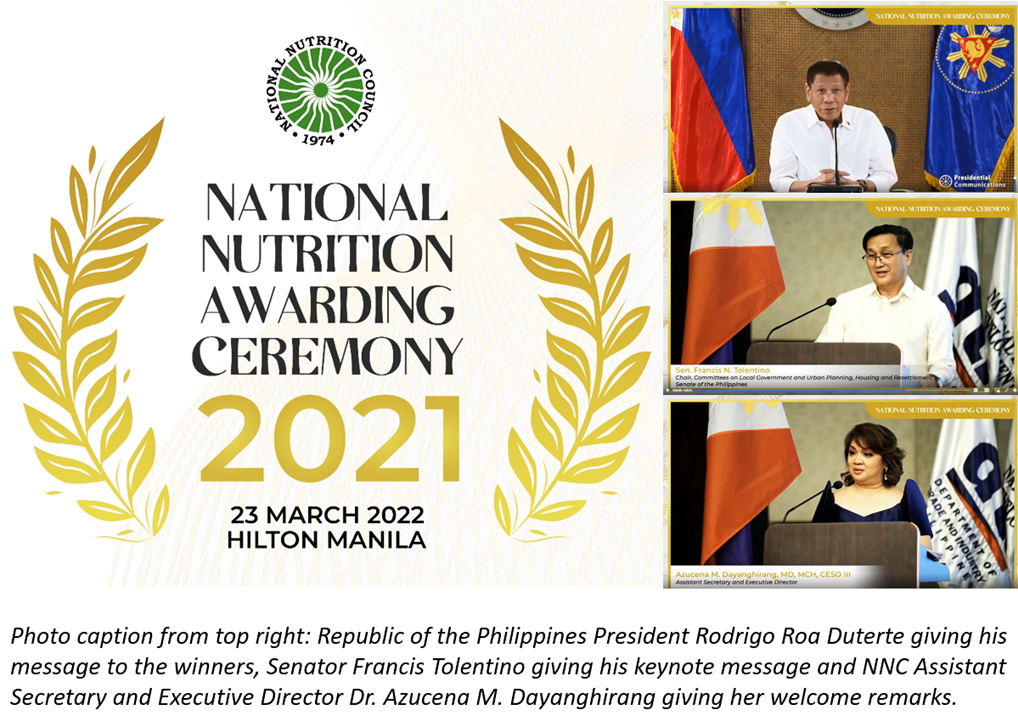 The municipality of Manolo Fortich in Bukidnon and Tagum City in Davao del Norte received the most coveted Nutrition Honor Award, the highest award requiring LGUs to achieve a minimum score of 95.0 percent as evaluated by a multi-sectoral national nutrition evaluation team. Aside from the trophy, the NNC awarded the two LGUs a grant of PHP 1 million each. To qualify, these LGUs had to put in more than six years of great performance.

The cities of Vigan, Mabalacat, and Biñan, as well as the municipalities of Talavera, Nueva Ecija, and Tublay, Benguet, and the province of Misamis Occidental, received the Second Year Consistent Regional Outstanding Winner in Nutrition (CROWN) Maintenance Award, which is given to LGUs with a score of at least 93.0 percent for efficient and effective nutrition program management. A trophy and PHP 200,000.00 were awarded to the victors. On the other hand, with a score of 90.0 percent, Cagayan de Oro City received a hundred thousand pesos as the lone LGU to qualify for the First Year CROWN Maintenance Award.

Aside from LGUs, the NNC recognized these local nutrition focal points of LGUS:

President Rodrigo Roa Duterte delivered a written and video message congratulating the NNC and all winners on their successful collaboration that has benefited Filipinos, especially infants and children. “I am one with you in honoring the outstanding LGUs and LNFPs who have contributed much to the effective and efficient of our health and nutrition programs," he said.

Senator Francis Tolentino was the guest of honor and keynote speaker for the event. He emphasized that the economic recovery pathway for the Philippines will be initiated, engineered, and spearheaded by the local government units and that the same is true with the state of nutrition. "Hindi po national government, kayo pong nasa baba ang magtutulak, magtataguyod, at maninigurado ng tagumpay g pagbangon sa pandemya." He also committed to ensuring a budget for nutrition. "Ito po yung gagawin ko sa next Congress, I will ensure that a big chunk of the Mandanas ruling windfall will be allotted, allocated, and earmarked for nutrition."

The awarding ceremony is an annual event of the National Nutrition Council to recognize outstanding LGs with effective and efficient implementation of nutrition programs, resulting in improved nutrition situations for infants, young children, and mothers. It's also the first time that NNC has awarded exceptional local nutrition action officers and district/city/municipal nutrition program coordinators for their invaluable work.

The NNC organized teams at the national and regional levels to evaluate the contenders virtually from April to November 2021 for their accomplishments in 2019. The final winners were verified and confirmed by the NNC Technical Committee.