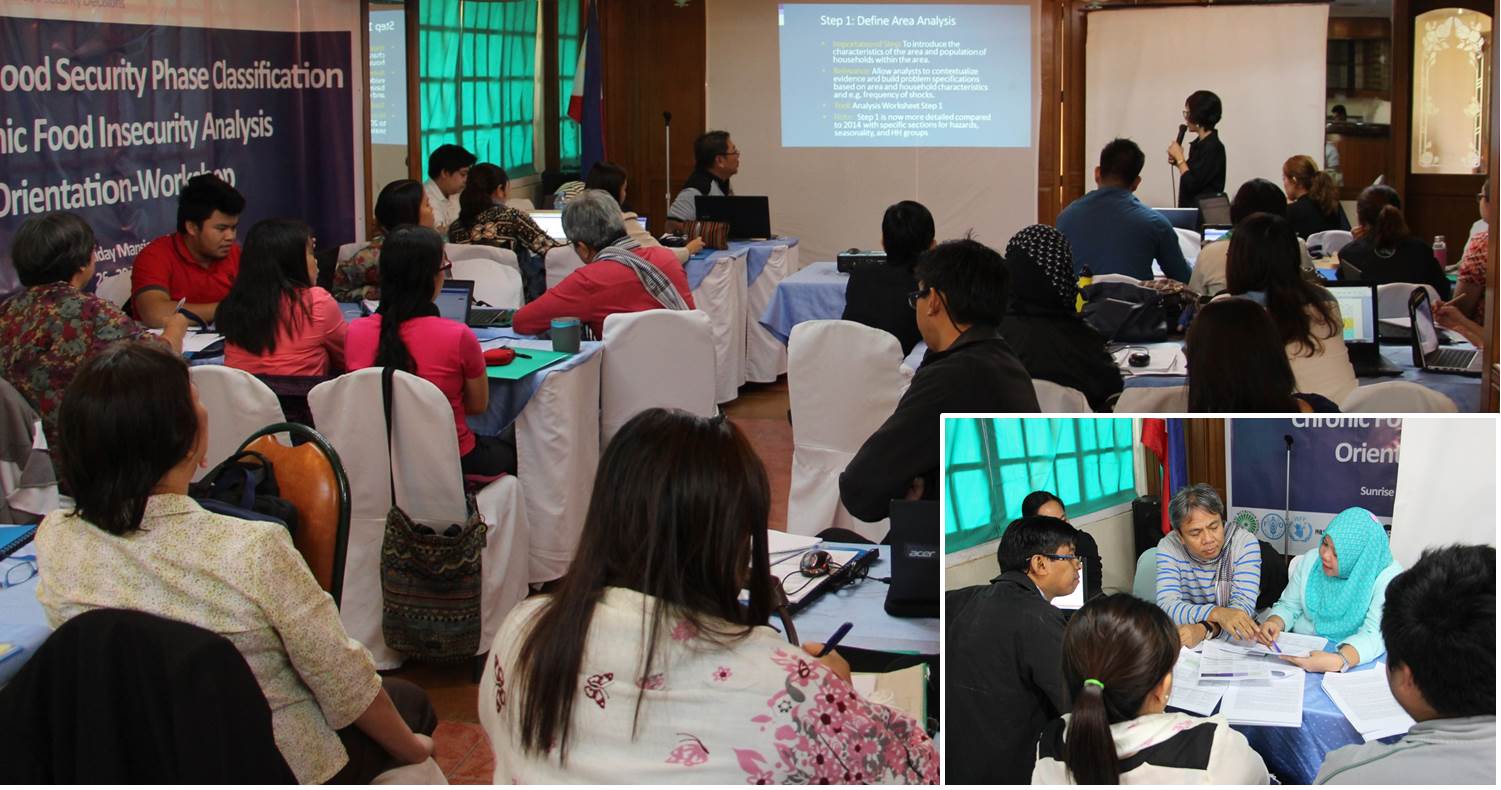 The National Nutrition Council with support from the Food and Agriculture Organization of the United Nations led the recent orientation-workshop on chronic food insecurity(CFI)  analysis on 26-29 January 2016 in Tagaytay.  Using the Integrated Food Security Phase Classification (IPC) Protocol, an interagency group of 34 food security analysts convened in Tagaytay City to initiate the food insecurity level classification of 18 provinces of the country.  These provinces, namely: Abra, Apayao, and Benguet (CAR); Ilocos Norte, Ilocos Sur and Pangasinan (Region 1); Cagayan, Isabela and Nueva Vizcaya (Region 2); Quezon (Region 4A); Masbate (Region 5); Misamis Occidental and Misamis Oriental (Region 10); South Cotabato and Sultan Kudarat (Region 12); Agusan del Sur (CARAGA); and Basilan and Tawi-Tawi (ARMM) are among the 30 priority provinces identified by the government in the Philippine Development Plan.  The list excludes PDP provinces  in Visayas affected by typhoon Yolanda.  This is to discount the effect of the super typhoon on livelihood, food security and nutrition whose impacts are analyzed during acute food insecurity analysis. 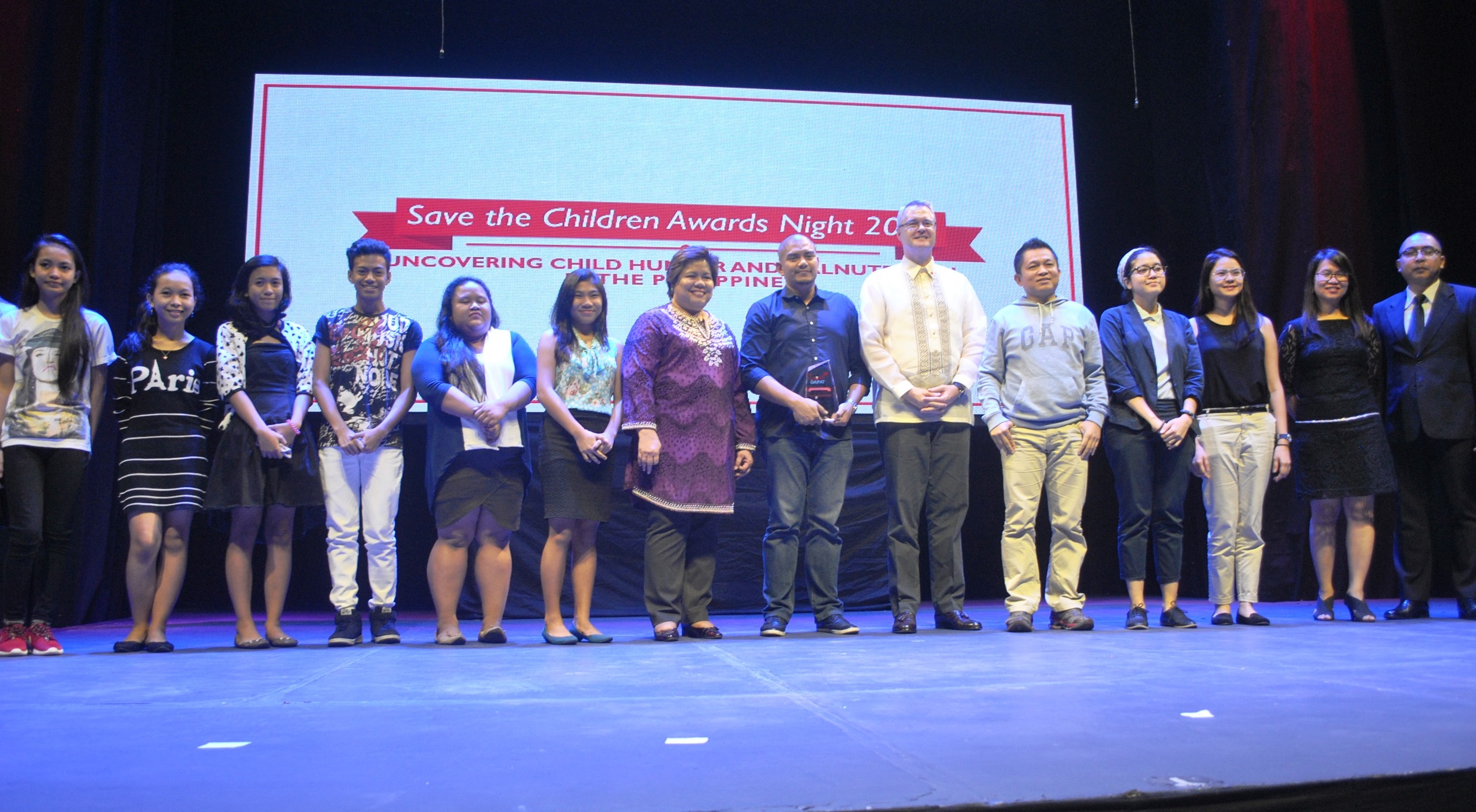 With a shared vision to eradicate hunger and malnutrition in the country, the National Nutrition Council graced the Save the Children Philippines’ 1st Save the Children Media Awards on November 25, 2015 at the PETA Theatre in Quezon City.

With this year’s theme, “Uncovering Child Hunger and Malnutrition in the Philippines,” the event is one of the key activities of Save the Children Philippines’ campaign against child hunger and malnutrition, entitled “Lahat Dapat.” This is the organization’s way of recognizing outstanding and existing audio-visual and print materials dedicated to presenting child hunger and malnutrition in the Philippines as an alarming concern intended to inspire everyone to participate in the advocacy to eradicate these conditions.

Sugar-sweetened foods and beverages like commercially available cookies, granola bars, fruit drinks, sports drinks, and soft drinks typically contain high-fructose corn syrup (HFCS) which is a liquid sweetener used to replace common table sugar in food manufacturing. It has been extensively used by the food industry since the 1960's because of its practicality and availability.

However, in the recent years, numerous studies showed that increased consumption of sugar-sweetened food and beverages is linked to overweight and obesity among children and adults, and to consequent development of noncommunicable diseases (NCDs) such as diabetes. The World Health Organization (2015) said that sugar-sweetened food and beverages can increase overall energy intake and may reduce consumption of foods containing more nutritionally adequate calories which leads to unhealthy diet and weight gain. Davao City – Deserving Nutrition Workers in Region XI have been awarded for the CY 2014 implementation of Nutrition Program last November 19, 2015 at the Grand Men Seng Hotel, Davao City. It was attended by the different nutrition partners from Regional Nutrition Committee XI (RNC XI) and the Local Government Units (LGUs) of the region. Also on the said event, the new Sakto Seal sa Asin was launched.

The awards that have given were based on the 2014 performance of the LGUs who participated in the annual Monitoring and Evaluation of Local Level Plan Implementation (MELLPI). In giving recognition to the LGUs who have exhibited exemplary performance in the management of their nutrition programs, Nutrition Program Coordinator Dr. Maria Teresa L. Ungson led the awarding which was assisted by the Regional Nutrition Evaluation Team (RNET): Ms. Grace Elsa B. Albano from the Department of Health XI, Ms. Nemia Lumaino from the Department of Trade and Industry and Ms. Carolina Armada from the Department of Budget and Management – to be part of the congratulatory board.

The Kaugmaon Award, is an award only given in Davao Region.  This award is given to the LGU who has improved and performed well and shows promise in the years to come.  For 2014 performance,the Municipality of KAPALONG, DAVAO DEL NORTE has proved to be a fighter and withstood challenges in their nutrition program that also ranked second best during the MELLPI visits. The award was received by Vice-Mayor Teresita Timbol and MNAO Edwin Ganiera.

Adding to list of awards for the LGU is the Pag-asa Award which is given to an LGU in recognition for its notable achievement with regards to achieving the highest average reduction in malnutrition among preschool children based on Operation Timbang Results and was given to the Municipality of Mawab, Compostela Valley.

This is just a simple manifestation that the Davao Region is moving forward to a more healthy population with their rising dedication to nutrition.

Congratulations to all the winners!