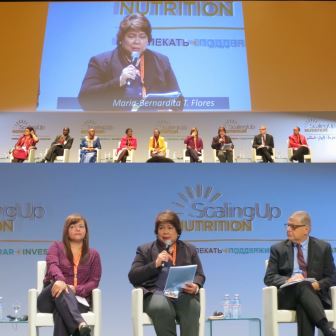 The future shines brighter for the world’s nutrition sector as countries from different parts of the world unite for the Scaling Up Nutrition Movement Global Gathering (SUNGG) at the Milano Congressi (MiCo) in Milan, Italy, 20-23 October 2015.

55 SUN Movement Country Networks including the Philippines participated in this year’s global gathering to take stock of the lessons from the past years and chart the direction of the Movement for 2016-2020 in line with Agenda 2030 Sustainable Development Goals, and its potential impact for improving nutrition.

The SUN Movement identifies ways to bring people and institutions together to better convene, mobilize, share, learn, advocate, align, and coordinate actions that contribute to ending malnutrition in all its forms.

The SUNGG is also timed to take place with the support of the 2015 EXPO Milano – an international exhibition, which promotes creativity, increases awareness, and seeks participation in the drive for sustainable food production and delivery across the globe with this year’s theme, “Feeding the Planet, Energy for Life.”

NNC Rallies Support for the First 1000 Days of Life

Phineas Taylor Barnum, a known author of his era, once said, “The foundation of success in life is good health: that is the substratum fortune.” But achieving good health and well-being may not be easy if optimum nutrition was not achieved and if health, nutrition, and related services were not provided even before birth. This in turn will hinder children from achieving their maximum growth potential.

In the Philippines, the 2013 National Nutrition Survey (NNS) reported that 3 out of 10 or 30.3% children among 0-5 years old were stunted or were too short for their height. The prevalence rate may have decreased compared to 2003 NNS result which is 33.9%, but is slow for a decade’s progress.

Chronic malnutrition is measured by stunting, which takes a long time to develop, but will severely cause failure to grow leading to lower physical capacity, and mental skills and activity. It also poses infants to greater risk of premature death; survivors have compromised immunity, and are at higher chance for developing infections, heart disease, diabetes and kidney infections. Mothers who are chronically malnourished as children will in turn give birth to low birth weight babies, and malnutrition shall be passed on to future generations like a vicious cycle.

Considering these life-long impacts of chronic malnutrition, the Philippines cannot risk another decade of little advancement. That is why the National Nutrition Council designed an Early Childhood Care and Development Intervention Package (ECCD IP) which primarily aims to provide integrated services of health, nutrition, early education, and social services on the most crucial period of one’s growth and development—the first 1000 days of life—which covers the period of conception up to the second year of life of a child. The ECCD IP operationalizes the priorities of action of the Philippine Plan of Action for Nutrition 2011-2016, aiming not only to reduce malnutrition but also to contribute to poverty alleviation. The ECCD IP shall be implemented in all Accelerated and Sustainable Anti-Poverty Program (ASAPP) municipalities from the Category 1 provinces as determined by the Cabinet Cluster on Human Development and Poverty Reduction targeting pregnant women, children 0-23 months old, and parents/caregivers.

November 5, 2015 marked a breakthrough in addressing severe acute malnutrition in the Philippines and a first in East Asia, that is, the launch of the National Guidelines for the Management of Acute Malnutrition among Children Under-5. The National Nutrition Council (NNC) joined this milestone being the co-lead of the PIMAM (Philippine Integrated Management of Acute Malnutrition) National Program Management Team, with Department of Health (DOH) being the lead. Health Undersecretary Vicente Belizario Jr., Dr. Willibald Zeck of UNICEF, Assistant Secretary of Health Maria-Bernardita T. Flores, key DOH and UNICEF officials, led the ribbon cutting ceremony at Richmonde Hotel in Pasig. Highlighted too in the event was the journey of two children, namely Jeric and Fahad, who once suffered from severe acute malnutrition.

A/Sec. Flores shared that in the Philippines, the Philippine Commission on Women was established as the national machinery for gender equality and women empowerment. She also shared that gender issues, including use of gender fair language, is being mainstreamed in the Philippines. She emphasized the use of mass media, interpersonal communication and capacity building of nutrition implementers at the local level for nutrition promotion and how these platforms are more empowering because of the positive feedback from both the listeners and the viewers.

Other speakers stressed the importance of educating both women and men on nutrition, ending women-related violence, gender equality, ending child marriage and the women’s role in breaking the vicious cycle of malnutrition. As a final thought for the session, A/Sec. Flores stressed the importance of different media forms, be it traditional or social media, to make noise and empower more women, men, and youth to improve their nutrition and their lives.

SUNGG15 showcased the efforts of the 55 SUN Countries in scaling up nutrition in their countries and in charting the future if the movement.