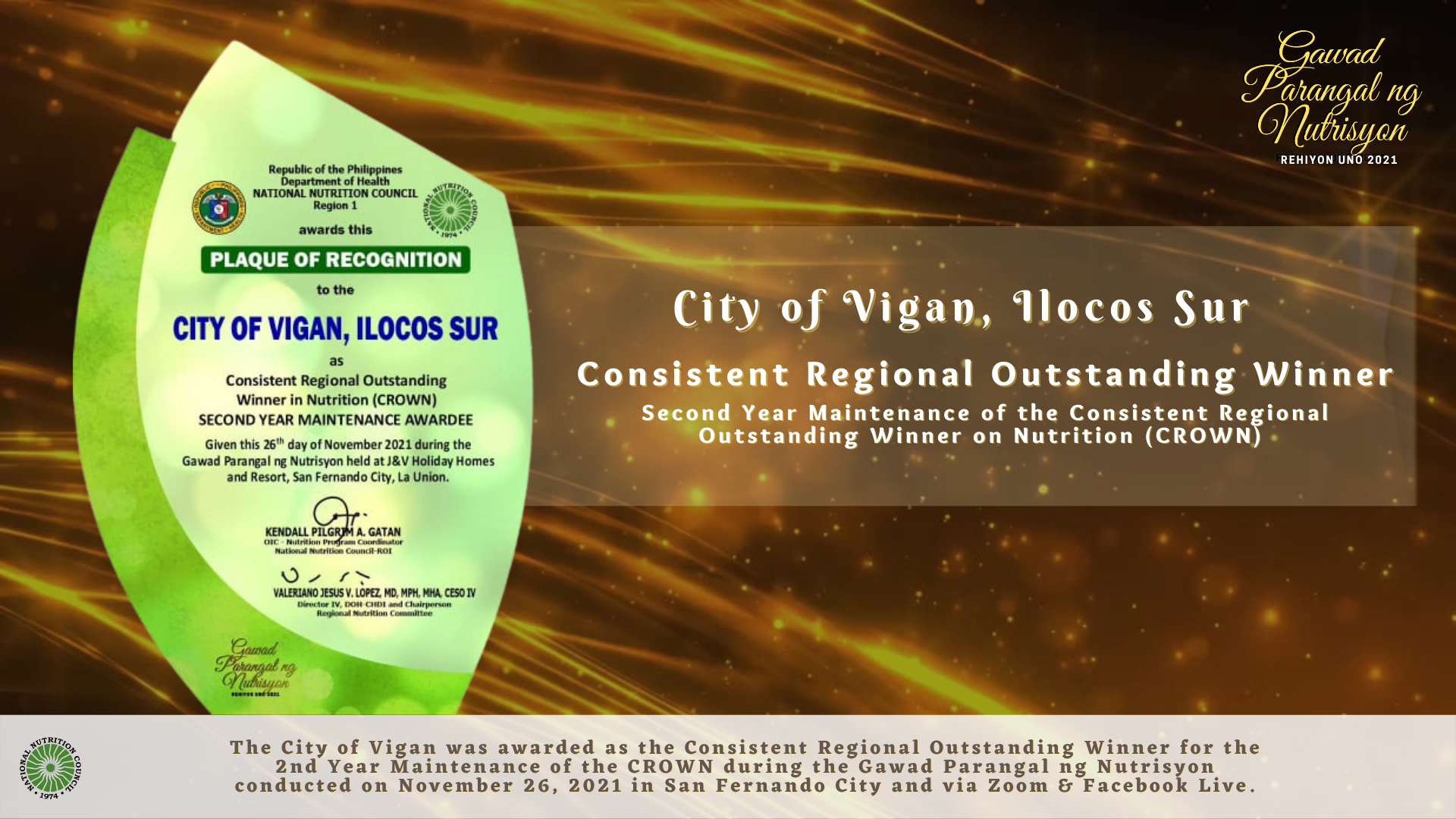 Vigan City continues to meet the health and nutrition needs of the Bigueño through transforming values into actions, visions into realities, obstacles into innovations, disconnectedness into solidarity, and risks into rewards.

The City Nutrition Action Plan serves as the blueprint of Vigan in addressing its nutrition problems as well as in achieving its vision of a health heritage community. It is aligned with the goals and objectives of the Philippine Plan of Action for Nutrition 2017-2022. The city appreciates the value of good strategic planning in the delivery of nutrition services through mobilizing members of the City Nutrition Committee Technical Working Group, private individuals, and stakeholders namely the Vigan Zumba Club, Federation of Senior Citizens, BHW Association, Federation of BNS, Philippine Red Cross, Ilocos Sur Medical Society, PWD Sector and youth representative among others. Their inputs had greatly contributed to the development of the city’s nutrition plan.

Different policies have been crafted and passed. Annually, new city ordinances dwelling on health and nutrition are being crafted and passed to institutionalize services. In 2019, one of the breakthrough ordinances passed was “An Ordinance Mandating the Institutionalization of the Barangay Nutrition Committee in all Barangays in the City of Vigan” which strengthened the functionality of the 39 Barangays Nutrition Committees.

Stunting is one of the nutrition challenges Vigan is facing at the present. Though it has decreased from 16.0 in 2015 to 4.36 in 2019, it remains relatively high. The City of Vigan continues to intensify its implementation of the First 1000 Days of Life Program to address this problem. Improving the nutritional status of women and children in the F1K of Life is critical in achieving optimum health for the Bigueño Children. With this, the city has customized a local version of the F1K program through the BFF Program or the Bigueños Foundation via F1K Program, a tool to address the stunting problem in the city.

To maximize the city’s resources and to strengthen the leadership and management capacities of the barangays, the city delegated the implementation of the Dietary Supplementation Program for the 6-23 months preschoolers to the Barangay Nutrition Committees. For the daycare center children, additional hot meals were provided in addition to their regular meals. They also included children who are known as “Paspasurot” in Ilocano or those who are under the Supervised Neighborhood Playscheme. Furthermore, school children who were under the wasted and severely wasted category were catered during the School-Based Feeding Program. In addition to the fund allocated by the National Government, 35% of canteen proceeds and financial support from stakeholders were used for the program.

In support of the advocacy of the National Nutrition Council to attain a healthy lifestyle and good nutrition, the LGU of Vigan continue to create ways to promote the 10 Kumainments, a popularized version of the National Guidelines for Filipinos. The guideline has equipped the people of Vigan with the knowledge to develop healthy eating choices and patterns. Also, the city through Memorandum No. 064 of 2019 thru CNC Resolution No. 4 of 2019 ordered all offices to utilize the Pinggang Pinoy as the basis for serving meals and snacks during the official city activities. Furthermore, the city also supported the use of Iron Fortified Rice during dietary supplementation activities through a city resolution.

One of the identified health challenges that the committee has identified is the increasing number of Teenage Pregnancies among Bigueño adolescents. To address this, the city strengthened its Adolescent Health Programs such as Rescue Kabataan Project, Y-Peer Project, Teenage NINJA, Nutri-Pop Caravan, and others. As we focus our interventions on the adolescents, we also include their parents, teachers, peers, and community who play a crucial part in their social environment.

The city also understands the link between poverty and malnutrition. The impact of poverty on individuals can be seen through multiple manifestations which include poor nutritional status, vulnerability to diseases, reduced poverty levels, and compromised growth and development. With this, the LGU is using a holistic approach in all its programs. It ensures that health and nutrition are being integrated into the other programs of the city such as in the Pagsapulan Raniag iti Masakbayan, livelihood assistance which grants assistance to each Barangays Poorest of the Poor.

The Barangay Nutrition Scholars and other health and nutrition frontline workers are also ensured that they received enough capability training for their professional and educational growth. With the creation of a cluster group for the BNSs, the city realized that learning is better when shared with peers and colleagues. Furthermore, the effort of the city in improving the capability programs specifically the BNS Program is a collaborative effort of the barangays, city, and various stakeholders, this has helped to level up the status of the BNS and other health and nutrition workers in Vigan.

Overall, the city is on the right track in meeting our goals to achieve a healthy heritage community. We take pride that Vigan City has moved one step closer in championing its Nutrition Program.

There are still many things to be done. The city is looking forward to empowering Bigueños to work together in making Vigan a habitable heritage city of choice! / Vigan City