Prioritizing Nutrition as the Root And Foundation of Santanians Well-Being 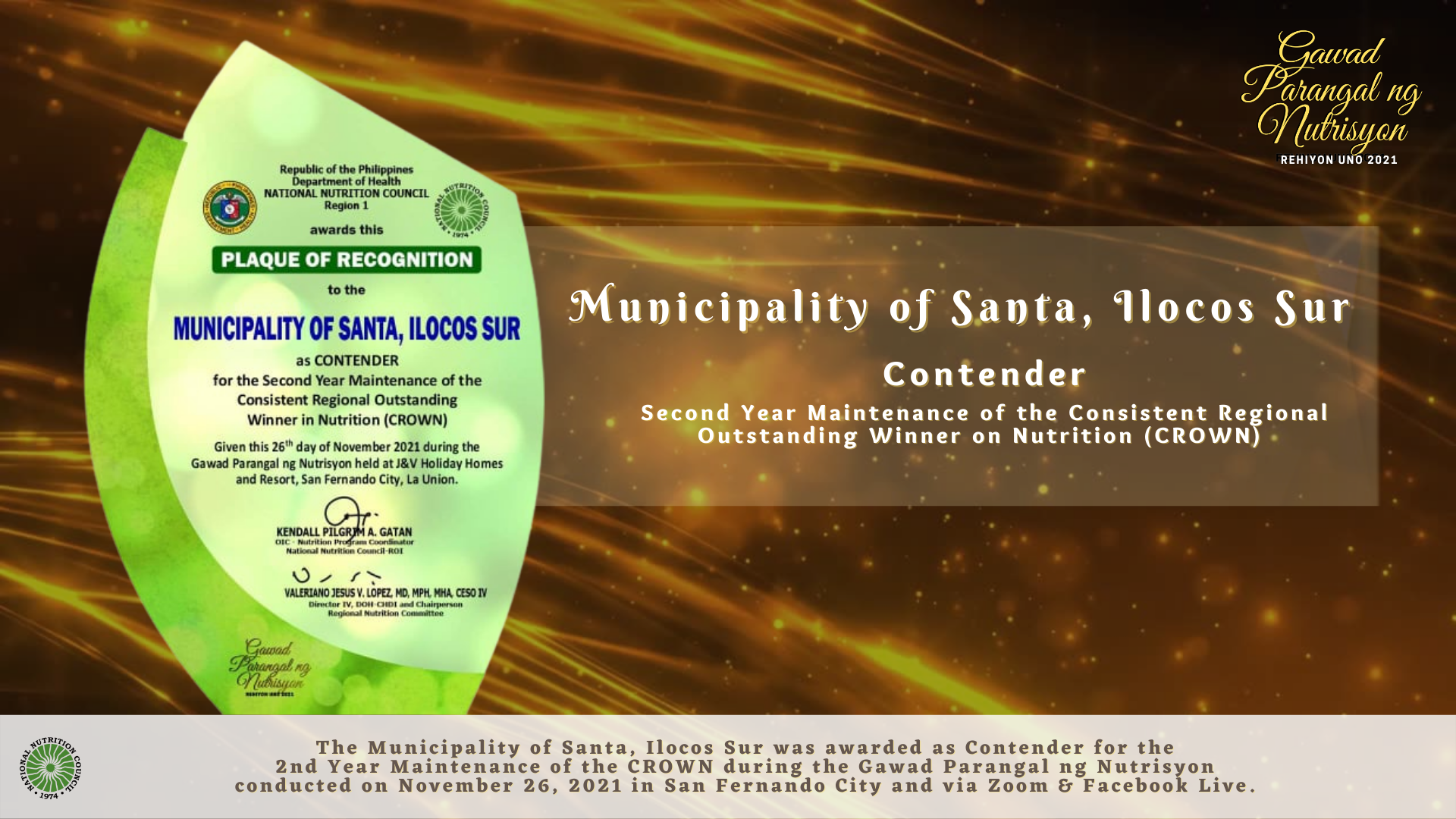 Santa is a 4th economic class municipality consisting of 26 barangays. It is one of the coastal towns in the province of Ilocos Sur with fishing as one of the main sources of livelihood and known for its “ipon”, a half-centimeter-long fish caught from Banaoang River. Ipon is the town’s prized fish that is depicted in the town’s seal. Santas’ economy hinges on local cottage industries and in producing blacksmith products, which are made up of wrought iron or steel, bent and out to form gates, grilles, railings, light fixtures, tools, and “buneng or bolo knife”.

The Municipal Nutrition Committee of Santa chaired by Mayor Jesus B. Bueno, Jr. believes that the ultimate goal is to reduce if not eradicate the prevalence of malnutrition among pre-school and school children and promote better health for all Santanians. Toward this, the Infant and Young Child Feeding (IYCF) Program was implemented in all 26 Barangays to increase the rate of exclusive breastfeeding. Nutrition education is incorporated during Pre-Natal visits, events like Buntis Congress, Sabay-sabay na pagpapasuso Activity, Pre-Marriage Counselling, and Family Development Sessions.

During these assemblies, topics including exclusive breastfeeding in the first six months of life, complementary feeding, proper sanitation, home food and nutrition security, and government policies and laws covering the First 1,000 days, EO 51 or Milk Code and RA 11148 or Kalusugan at Nutrisyon ng Magnanay Act are discussed. Nationwide Nutrition activities such as Operation Timbang Plus, Pabasa sa nutrisyon, Gulayan sa paaralan at Komunidad, and dietary supplementation programs for day-care children, at-risk public elementary and secondary school children, and at-risk pregnant mothers are carried out. In support of the First 1000 days program, the Sanguniang Bayan crafted “An ordinance promoting breastfeeding and requiring the establishment of lactation stations in all health and non-health institutions in accordance with Republic Act 7600 and Republic Act 10028”. Aside from this, there is also an organized Breastfeeding support group in every barangay. The presence of these active breastfeeding support groups in 26 barangays provides strong community support for pregnant and breastfeeding mothers, encouraging them to properly take care of their babies in their first 1000 days of life.

Indeed, political will, strong leadership, unity among the people, and effective programs can truly bring malnutrition to an end. Lastly, all is well that ends well. / Santa, Ilocos Sur