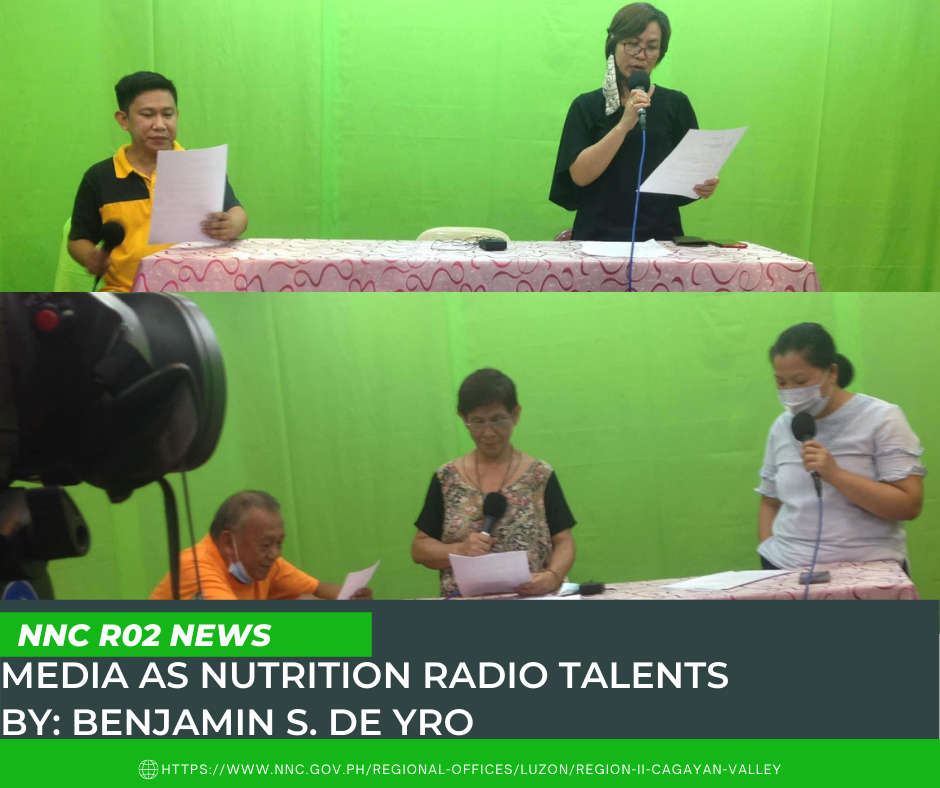 A dropped needle can be heard as a deafening silence enveloped the room.  Each of those inside the room was holding a two-page script and glued their eyes on it. Then, a voice shouted, ‘Take 3!’.

The last voice said “ this message is brought to you by the National Nutrition Council-DOH, Balay Ni Ifan Media Group and this station’. Welcome to another taping session of the media for the First 1000 Days advocacy.

Yes, the voices for the nutrition plugs came in Pilipino, Ibanag and Ilocano which, earlier, flooded the airlanes in Cagayan Valley.

The ‘voices’ were boomed from members of the Balay Ni Ifan Media Group established by NNC region 2 as early as 2010. Majority of these talents have been used  for commerial and government plugs but to dramatize a script is another challenge.

“We at NNC strongly believe in the effectiveness of radio as a medium to as it is a perfect vehicle to enhance further our nutrition advocacies,” Meggie Lonzaga, regional nutrition coordinator said.

So how was it done? The format of the plugs are usually drama and the original Pilipino script  from NNC central office is then translated into various languages prevalent in a locality.

The members are assigned with scripts based on their ethnicity. Thus for Teresa Campos of Radyo Pilipinas-DWPE in Tuguegarao, she’s at home with Iloco as her birth tongue.

For Oliver Baccay of PIA, Ibanag is ‘it’ in the same vein that  any member can do the Pilipino script.

Used to speak in the national language during their radio broadcast hours, the members at times find it ‘interesting and funny to err’ in the pronunciation of their own tongues.

According to Cadel Trilles, manager of DZCV, ‘that made the recording session enjoyable and a break from broadcast routines’.

“ To speak and to read are two different things,” said Dina Villacampa, an Ibanag, of Radyo Pilipinas.

This year, the theme of these plugs are  the same; First 1000 Days. However, it now focus on the ABKDA concept of pregnancy,  breastfeeding and supplementary feeding.

For NNC region 2, it’s a mandate. For the Balay Ni Ifan media group members, it’s simply their way of support to the agency.