Over the years, it has been identified as a major supplier of agricultural products and source of irrigation and electric power requirements of regions adjacent to it.

Geographically, the valley is located at the northwestern tip of the Philippines and is bound on three sides by protective mountain ranges, namely the Cordillera on the west, the Caraballo on the south and the Sierra Madre on the east. It is also skirted by the Pacific Ocean, on the east coast and the Bashi Channel on the north. Inland, it is criss­crossed by the enormous Cagayan River, the longest river in the country.

Region 02 is composed of five provinces. These are the island province of Batanes, the valley provinces of Cagayan, and Isabela and the mountain provinces of Nueva Vizcaya and Quirino. These provinces consist of ninety (90) municipalities and four (4) cities, which in turn are subdivided into 2,311 barangays.

Region 02, the second largest region in the country in terms of land area is made up of 3,640,300 hectares. About 60% of the region's land area is forestland, 215 constitute agricultural land, while residential land is estimated to cover about 0.8% of the total land area.

All provinces in the region belong to climate types III and IV. Type III is characterized by no pronounced maximum rain period with a short dry season lasting from one to three months between March and May. A little less than half of the eastern part of all the provinces fall under this category, and are mostly mountainous areas. Type IV that covers the western parts is characterized by no pronounced maximum rain period and no dry season. In this type of climate, seasons are not very pronounced; relatively dry from December to April and wet during the rest of the year. Heavy precipitations generally occur from June to November during the southwest monsoon season with October having the heaviest precipitation.

The region’s population growth is alarming. Here is the current breakdown of R02 population count. 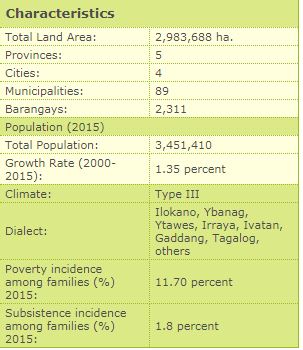 for more information, you may visit: http://countrystat.psa.gov.ph/?cont=16&r=2