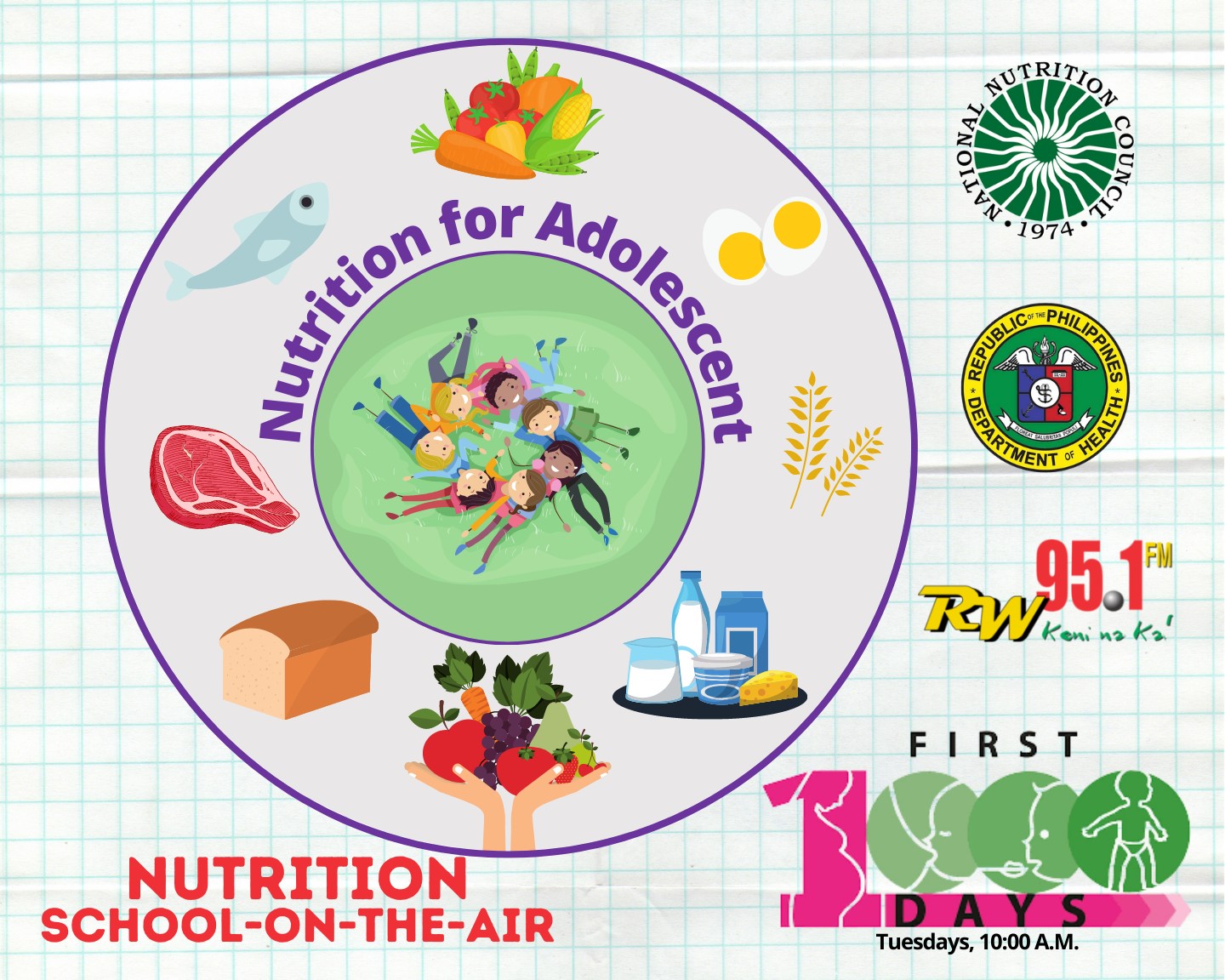 One may be wondering why nutrition in adolescence is included in the series of Nutrition-School-on-the-Air: First 1000 Days. But before any prejudice, let us first look back at a basic biology lesson: the human life cycle. In the human life cycle, adolescence (13-19 years old) is the period of transition between childhood, specifically the primary school stage (5-12 years old) and adulthood (36-55 years old). Big changes happen during this stage such as cognitive, social, emotional, sexual, and most especially, physical changes in a person. The adolescence stage in one life’s cycle is a very important window of opportunity wherein one’s poor nutritional practices and behaviors can be corrected and their nutritional status can also be improved. This is also the stage where any nutritional deficiency that the person acquires or experience can have a significant or major impact on their health or the health of their future children which is why it is considered as a critical period. Optimum nutrition in the body is needed in ensuring full growth potential is achieved.

According to the 2015 National Nutrition Survey (NNS) conducted by the Food and Nutrition Research Institute of the Department of Science and Technology (FNRI-DOST), 25% of adolescents in the country are stunted while 14.4% of them are wasted. An alarming 10.8% of adolescents were also recorded to be overweight or obese which is higher than the national prevalence rate of 8.3%. This can only mean that a significant number of adolescents in the country are not getting the optimum nutrition they need to reach their full growth potential, which also puts them in a vulnerable position from diseases and infection.

Nutrition in the adolescent stage should be given a focus on, especially for females as this is the time to prepare the body for the nutritional demands that will happen during pregnancy and lactation in later life. In making sure that the adolescent female is getting the optimum nutrition, there is a bigger possibility that during her pregnancy later in her adult life, complications during pregnancy can be avoided, including fetal/infant complications. Poor nutritional choices made during the adolescent stage can greatly impact one’s adult life which then can affect one’s pregnancy. 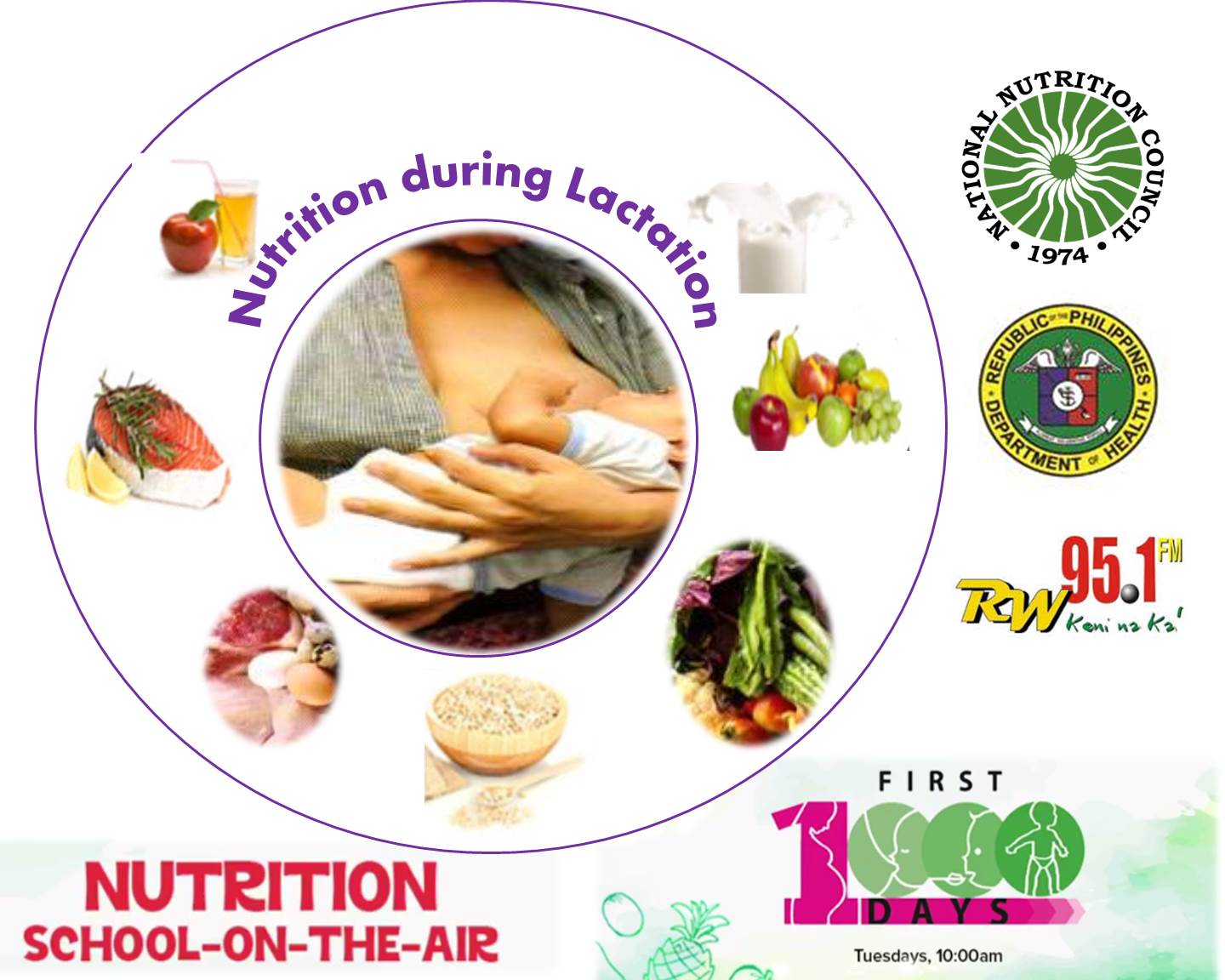 Nutritional needs of women during lactation increased in response to breast milk production. Thus, “Nutrition during Lactation” was the main focus of the 9th episode of the NNC-DOH Nutrition School on the Air (NSOA) First 1,000 (F1K) Days radio magazine program on 23 February 2021.

NO II Cuyco emphasized that during the first six months after delivery, the baby is fed only on breast milk, and that the baby depends on the mother’s nutrient requirements. Thus, lactating mothers are advised to eat a healthy and balanced diet during this period.

Ms. Natividad added that nutritional demands during lactation are high and can have a negative impact on both mother and baby if they are not met. The daily diet of a lactating mother will be adequate provided that food selection and preparation is appropriate.

Additional 500 calories per day is required for a lactating mother. The additional calories can be met by eating, for example, extra three (3) slices of fish per day or one cup of milk and peanut butter sandwich. Simply eating more of the usual balanced diet will enable lactating mother to meet higher energy demand while breastfeeding.

The additional protein requirements during lactation can be met by consuming protein rich foods such as one piece of egg or 25 grams of cheese or 175 grams of milk. Calcium is essential during lactation because it is required for milk production. An intake 500 ml of milk or milk products per day must be taken in addition to eating calcium rich foods, such as green leafy vegetables like malunggay and fish.

The additional food to be eaten during lactation is needed to replenish the energy that is lost through breastfeeding. Lactating mother should eat regularly to increase food intake and meet all nutritional needs by eating a variety of foods from the three food groups – the go, grow and glow foods.

In culmination of the weeklong celebration of the 2020 National Human Rights Consciousness Week with the theme “Karapatan at Pagbangon sa Lahat ng Panahon: Recover Better – Stand Up for Human Rights,” the Commission on Human Rights Regional Office 3 (CHR-RO3) held a Virtual Awarding Ceremonies for CHR-RO3 Allies and Partners on 9 December 2020.

During the ceremony, the National Nutrition Council-Region III (NNC-Region III) was presented with the Human Rights Champion Award, along with other partner agencies and organizations to recognize their continuous commitment in upholding human rights, especially during the COVID-19 pandemic and after the onslaught of numerous natural disasters.

During the ceremony, the partner agencies and organizations recognized as Human Rights Champion, were each given the chance to express their gratitude and commitment to the agency’s advocacy. Ms. Antonette Gail Garcia, Nutrition Officer I of NNC-Region III, who attended on behalf of Regional Nutrition Program Coordinator Ana Maria B. Rosaldo, congratulated CHR-RO3 for the successful celebration of the Human Rights Awareness Week for the year 2020 and thanked the agency for the invitation and for presenting such “prestigious” award to NNC-Region III. NNC-Region III expressed its utmost support to the endeavor, advocacies, and future undertakings of the CHR-RO3. NNC-Region III also reiterated its role in championing for human rights linked in its very purpose and goal.

“The NNC which main goal is improving the nutritional status in the country and ultimately end malnutrition, continuously advocates for the protection of human rights, especially since the right to adequate food and nutrition, and freedom from malnutrition is a basic human right.”

The National Nutrition Council Region III, an active member of the Regional Sub-Committee for the Welfare of Children (RSCWC) Central Luzon joined the LCPCng Gumagalaw Online Caravan for the Provinces of Nueva Ecija and Pampanga on 24 November 2020 via zoom teleconference where the agency shared the nutrition situation of children in Central Luzon. Other members of the RSCWC such as the Department of Health, Philippine National Police, Department of Social Welfare and Development, Department of Education also shared the situation of children in Central Luzon of their respective sector.

The online caravan was part of the month-long celebration of the 28th National Children’s Month celebration for the year of 2020, with the theme “Sama-samang Itaguyod ang Karapatan ng mga Bata sa Panahon ng Pandemya”.  In ensuring the functionality of the Local Councils for the Protection of Children (LCPC), the caravan aimed to identify issues and concerns on children’s welfare and rights during COVID-19 pandemic, and to strengthen collaboration between and among LCPC key actors and RSCWC Members.

NNC-Region III presented the nutrition situation of children in the provinces of Nueva Ecija and Pampanga based on the results of the 2019 Expanded National Nutrition Survey (ENNS) of the Department of Science and Technology- Food and Nutrition Research Institute (FNRI-DOST). 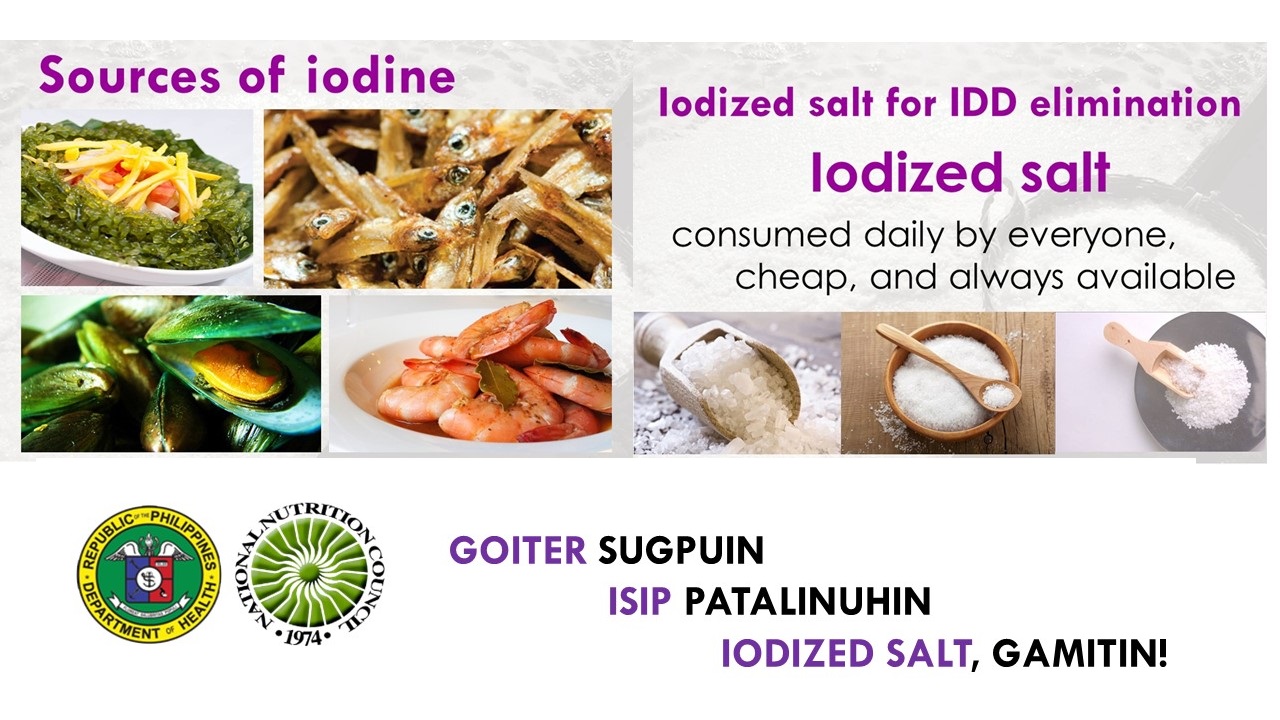 Every year, the NNC and the DOH enjoin everyone to support the celebration of national Goiter Awareness’ Week, with the theme “Goiter Sugpuin, Isip Patalinuhin, Iodized Salt Gamitin!”  This is to create greater awareness among Filipinos to consume iodine-rich foods to prevent not only goiter but all types of Iodine-Deficiency Disorders (IDD).

What is Iodine or “yodo”?  Why is it important?  Iodine is an essential nutrient needed by the body in minute amount. It is an integral part of the thyroid hormone responsible for the regulation of body temperature, metabolic rate, reproduction, growth, nerve, and muscle function.

Iodine is an essential micronutrient for humans. Just like other minerals, it is needed by the body to regulate body temperature, metabolic rate, reproduction, growth, nerve and muscle function. Inadequate intake of iodine has a wide range of serious risks such as mental retardation, reduced IQ points, deaf-mutism, and dwarfism; goiter or enlargement of the thyroid gland, miscarriage and giving birth to abnormal babies.  Based on results of studies, an average of 13.5 IQ points is lost due to deficiency in iodine. Both children and adults are affected by IDD.

One cost-effective strategy to address IDD is the addition of iodine or potassium iodate to salt.  One of the many ways to ensure iodine supply in your body is through the use of iodized salt in preparing meals. Iodized salt is salt fortified with iodine at levels above the natural state. It is food grade salt, fit for human consumption, and contains the prescribed level of iodine. Iodized salt is just like ordinary salt used to season and make food taste good. It does not make food taste bad or bitter. Iodized salt is not always fine salt o “pinong asin”. It is any salt, whether rock (coarse or “magaspang”), fine or those available in the market using the takal system. Just like any other food, iodized salt can be bought in groceries, supermarkets, sari-sari stores and even in health centers nationwide.

This salt fortification strategy was made initially in Central Luzon, particularly in the Province of Bulacan using an iodizing machine although it was short-lived because of the cost of maintenance of the machine. In Olongapo City,  the Barangay Nutrition Scholars of Barangay Sta.  Rita had their salt iodized manually through the initiative of a non-government organization under the Urban Basic Services Program in the city. Another one was in Barangay Mabayuan, Olongapo City which was initiated and initially funded by barangay officials. Meanwhile, a barangay cooperative or Samahan ng mga Magsasaka at Mangingisda  in Barangay Libaba, Palauig, Zambales had engaged also in manual salt iodization in 2015. The product is labelled as “Bagong Sikat” iodized salt, which is in operation until today.

AIP for the VIPs: Investing in Nutrition as a Wise Choice 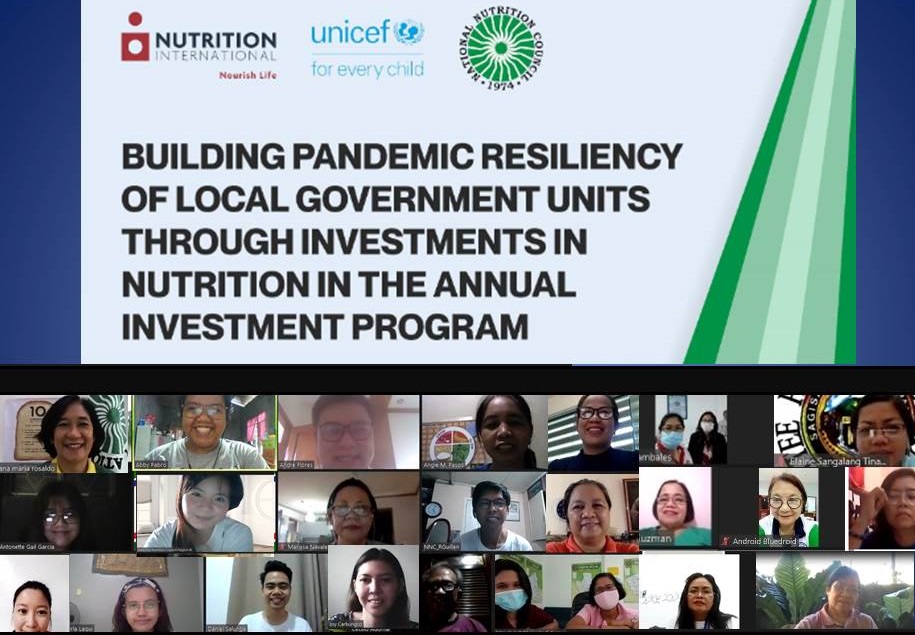 2020: A challenging yet fulfilling year despite the COVID-19 pandemic in the country.  This year marks the busiest days of the 5-member RO3 Team of the National Nutrition Council (NNC)-Region III as the team embraced the challenge of nutrition advocacy with elected Local Chief Executives (LCEs) who Chairs the provincial, city and municipal nutrition committees on the WHYs of investing in nutrition and in integrating nutrition in their Local Development Plans and Annual Investment Programs (AIPs).

There are seven (7) compelling reasons on why Local Government Units (LGUs) need to put high priority to nutrition and make significant investments in nutrition. These are as follow: 1) Alarming nutrition problem; 2) Embarrassment for a middle-income country; 3) Cost of malnutrition to the economy; 4) Negative impact of malnutrition on development; 5) Returns to investment in nutrition very high; 6) Intervention to address malnutrition exists; and 7) Nutrition is a child right and an integral part of the United Nation (UN) Sustainable Development Goals (SDGs) and the Philippine Development Plan (PDP). Supportive policies for LGUs to invest in nutrition exist.

The “very important persons” we are targeting in this endeavor are the undernourished children, pregnant and lactating women, and the nutritionally at-risks families in Central Luzon. The LCEs and the members of the local nutrition committees up to the barangay level are also considered our “very important partners” in ensuring the integration of nutrition in their 2021 AIP, for the continuing effort to secure the outcome targets of the Philippine Plan of Action for Nutrition (PPAN) 2017 – 2022 in the current and post-pandemic situation. There are 32 priority provinces identified under the Human Development and Poverty Reduction Cluster (HDPRC) in the country.

A three-day workshop to integrate nutrition in the AIP was adapted for delivery through online platforms as a mitigating measure following the suspension and limitations in the conduct of mass gatherings such as workshops and trainings due to the COVID-19 pandemic experienced across the country.

Read more: AIP for the VIPs: Investing in Nutrition as a Wise Choice