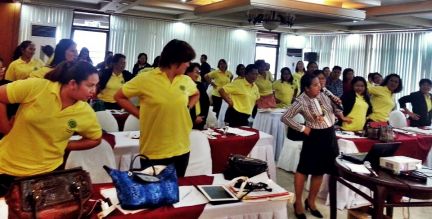 The first day focused on the conduct of the 1st semi-annual meeting of the regional federations such as the National Association of Nutrition Action Officers – MIMAROPA Chapter (NAOPA – MIMAROPA), District / City Nutrition Program Coordinators Association of the Philippines – MIMAROPA Chapter (D/CNPCAP - MIMAROPA) and BNS Federation of Region IV-B Inc. while the second day was devoted for the training on the promotion of the Nutritional Guidelines for Filipinos.

OIC Carina Z. Santiago of NNC-MIMAROPA expressed her gratitude for the unwavering commitment and support of the nutrition workers in leading the implementation of nutrition programs and activities and for their effort to grace the two-day event.

To update the participants of the current nutrition situation in the region, Nutrition Officer I Sheila Marie A. Vergara of NNC – MIMAROPA presented and discussed the results of the Operation Timbang 2013 and School Weighing, School Year 2012-2013. Moreover, Nutrition Officer III Donnah May S. Guevarra of NNC – MIMAROPA presented plans and activities for 2014.

In addressing the concern of prevalence of malnutrition in the region, Ms. Monette S. Navera of Nutrition Center of the Philippines encouraged the participants to continuously implement Pabasa sa Nutrisyon and join the annual Pabasa sa Nutrisyon Awarding. Ms. Navera presented mechanics of the awarding and promoted different products of the Nutrition Center of the Philippines which can be used for feeding programs.

After which, the regional federations had the opportunity to review their accomplishments last year and set new plans and activities for this year.

During the second day, NO I Vergara discussed the guidelines for the recognition of longest serving Barangay Nutrition Scholars and guidelines on establishing a database on functional Local Nutrition Committees. NO III Guevarra also presented updates on height board verification.

To formally start the training, NO III Guevarra discussed the Nutritional Guidelines for Filipinos. After which, Assistant Professor Francis Grace H. Duka-Pante of University of the Philippines Diliman presented different ways or strategies to creatively promote the Nutritional Guidelines for Filipinos where the participants actively participated.

The training ends with OIC Santiago informing the participants that IEC materials such as posters, tarpaulins, and public utility vehicles stickers will be distributed region wide to intensify the promotion of the Nutritional Guidelines for Filipinos. Ten Kumainments will also be launched nationwide by the Central Office of the National Nutrition Council.

OIC Santiago also challenged the participants to promote the Nutritional Guidelines for Filipinos in creative and effective strategies not only to add knowledge but also change the eating and lifestyle practices and behavior of the MIMAROPANs.