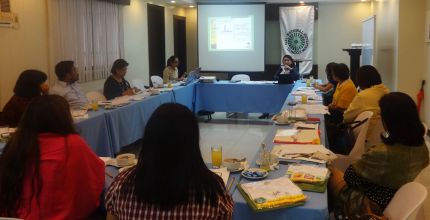 The Regional Bantay Asin Task Force (BATF) conducted its first meeting for the year during a back-to-back meeting with the Regional Nutrition Committee on 31 July 2014 at the Fersal Hotel, P. Tuazon Blvd., Quezon City.  Updates on the planned activities were discussed including its technical assistance to the Bantay Asin Task Force of Occidental Mindoro which was organized in April 2014. A draft Executive Order creating the task force citing its composition and functions is now in the process of approval. OIC Carina Santiago emphasized that the Regional BATF should work hand-in-hand with the Provincial BATF of Occidental Mindoro for the continued progress of the National Salt Iodization program in the province, which is also seen to subsequently help local salt producers in the region.

The Regional BATF of MIMAROPA recognizes the important role that the province plays in country’s fight against Iodine Deficiency Disorders since Occidental Mindoro is among the major salt-producing provinces in the country. Hence, the Regional BATF pledged to provide continuous technical assistance to the Provincial BATF of Occidental Mindoro, the first province-level watchdog organized in the region to monitor and assure the successful implementation of the National Salt Iodization program.

Last 30 April 2014, Governor Gene Mendiola himself catalyzed the creation of the Provincial BATF during a meeting with concerned national government agencies, non-government organizations, and local salt producers and distributors. Amidst apprehension and reluctance among salt producers and distributors, and even local officials, Gov. Mendiola insisted on abiding to the Asin Law. “We already have a law that mandates the iodization of salt and we have to follow”, were his words. Gov. Mendiola also asked for local support from the municipalities of San Jose and Magsaysay, two of the top salt-producing municipalities in the province, through the creation of municipal-level Bantay Asin Task Force. Mr. Voltaire Dequina, President of PROMO Nutri Com, the region’s local media arm in promoting good nutrition, sworn to also help in the province’s advocacy to create awareness and demand for Iodized salt.