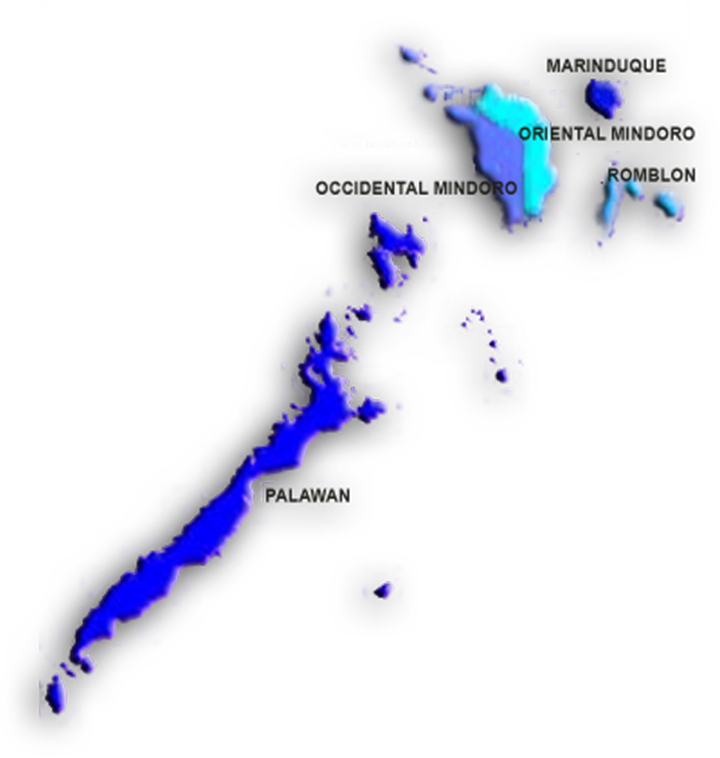 MIMAROPA is one of the busiest regions in terms of tourism, cornering more than its fair share of the total number of tourists that visit the country. The region is home to Palawan’s serene tropical beauty as well as Puerto Galera’s beautiful sunsets and vibrant party scene. Tourists who are looking for a rich dose of history and religion flock to Marinduque, the country’s Lenten capital, where the famous Moriones festival is held every year. Divers from all over the world seek the marine wonders of Occidental Mindoro’s Apo Reef. Mountain climbers will delight in exploring the challenging terrains of Romblon’s Mt. Guiting- Guiting, as well as the province’s unexplored and unspoiled beaches.

The region’s economy relies mostly on agriculture, fishing and ecotourism, making it one of the strongest in the country. MIMAROPA is one of the Philippine’s top producers of rice, banana, coconut, mango, cashew, papaya and cassava, which are included among the country’s top export products.

The region is the second top fish producer in the country, and its output makes up almost 14% of the Philippine’s total produce annually from 2002-2004. MIMAROPA also ranks as the second top producer of seaweeds, representing 21% of the country’s total output.

Occidental Mindoro  is a province of the Philippines located in the MIMAROPA region in Luzon. "Home of the Indigenous Mangyans". Its capital is Mamburao and occupies the western half of the island of Mindoro, on the west by Apo East Pass, and on the south by the Mindoro Strait; Oriental Mindoro is at the eastern half. The South China Sea is to the west of the province and Palawan is located to the southwest, across Mindoro Strait. Batangas is to the north, separated by the Verde Island Passage.

The present Occidental Mindoro is an agricultural area devoted to the production of food. It 's economic base is rice production (Oryza sativa culture), a Philippine staple crop. It is the leading activity and source of seasonal employment in the province, participated in by almost 80 per cent of the population, including children.

Wet land or lowland rice is a rainy season crop, being heavily dependent on water, and therefore produced from July (planting season) to October (harvest season). Tobacco, onions, garlic and vegetables are rather grown during the dry season (November to May)since they are not water-intensive crops, and require longer photoperiodicity.

Rice, corn, onions, garlic, salt, fishes(both wild water and cultured) are some of the relatively significant surpluses produced in the province in exportable quantities. Mangoes, cashew nuts, cooking bananas (saba) and some other fruits grown in upland orchards are among the other exports of Occidental Mindoro that have traditionally contributed to its income. Peanuts are also comfortably grown in some parts of the province, as well as cassava, sweet potatoes, ginger and other minor cultivars.

Forest resources include timber and minerals, among them gold, copper, silver, chrome, and non-metallic minerals such as lime for making cement, and greenstones for ornaments. Timber groups include many species of hardwoods, such as mahogany, and other types of trees in high demand for durability.

There are no large industries in the province. The government is the biggest employer, absorbing most of the off-farm labor force. The local electric cooperative, Occidental Mindoro Electric Cooperative(OMECO), is the biggest employer in the private sector, with nearly 150 regular employees. The rest of the population are engaged in private trades.

Oriental Mindoro occupies the eastern part of the island of Mindoro. It is bounded on the north by the Verde Island Passage, on the east by Tablas Strait, on the west by Occidental Mindoro, and on the south by Semirara Island.

The province´s varied topography is dominated by rugged mountain ranges on the west and fertile valleys towards the eastern coast.The Halcon mountain range runs from north to south and serves as the province´s natural boundary with Occidental Mindoro. Mt. Halcon is the fourth highest peak in the Philippines.The province does not have pronounced dry or rainy periods but is open to southwest monsoons and typhoons.

Puerto Galera is a major tourist destination. Its numerous white beaches are ideal for water skiing, windsurfing, scuba diving, snorkeling, boating and swimming. Aside from its beaches, Puerto Galera has other attractions. A mini-museum in the compound of the Catholic Church displays valuable Chinese artifacts and porcelain dishes from the island´s early trading days. The marble Cross at Muelle is a landmark in memory of the crew of a Spanish warship which sank in 1879. Tamaraw Falls, the largest waterfall in the province, is 131 meters above sea level with a natural swimming pool at its base. The Marble Quarry in Mt. Talipandan is where 17 different kinds of marble are extracted.

Marinduque is a heart-shaped island between Tayabas Bay in the north and Sibuyan Sea to the south. It is separated from the Bondoc Peninsula in Quezon by the Mompog Pass. Some of the smaller islands to the northeast are Polo Island, Maniwaya Island, and Mompong Island. The highest peak in Marinduque is Mt. Malindig (formerly, Mt. Marlanga), a potentially active volcano with an elevation of 1157 meters.

The island has two major seasons—the dry season (November through February) and the rainy season (June through October), with a transitional period in between.

Marinduqueños are said to be very hospitable in nature and are very welcoming. One such custom reflecting this is putong or tubong, which is a custom of welcoming and honoring friends and visitors. The honoree (or honorees) are seated and crowned with flowers while local women dance and sing for them. Other well-wishers throw coins and flower petals for long life. Marinduqueños are of Tagalog origin and speak Tagalog.

Romblon is best known as the marble capital of the Philippines.

Situated at the heart of the Philippine archipelago, Romblon links the supply areas of Luzon, Visayas, and Mindanao.  Endowed with rich natural wonders, Romblon is a cluster of twenty islands hemmed in by the Sibuyan Sea on the north, east and south, and the Tablas Strait on the west.

The Tugdan Airport located at Tablas Island is only 45 minutes away by light aircraft from Metro Manila’s financial districts. Also, direct ship routes from Manila as well as the southern Luzon ports of Batangas and Lucena intensify linkages with the industrial CALABARZON region, making this province of 17 municipalities and 219 barangays an ideal location for supply distribution and light manufacturing ventures.

The capital town of Romblon and the port town of Odiongan are the province’s trade and commercial centers.

Palawan is a narrow archipelago of 1,700 islands on the western border of the Philippines. It's geographical location makes it seem remote from the rest of the country, and in fact, some of its southern islands are closer to Malaysia than to other provinces. The waters of the South China Sea lap the western shores of Palawan, while the Sulu Sea hugs its eastern coast. With a land area of more than 1.7 million hectares, Palawan is the country's largest province.

Its irregular coastline stretches almost 2000 kilometers long, indented by numerous coves and bays. Highlands and rolling terrain covered with lush forests create a cool and scenic landscape. Except for the northern towns, which are occasionally visited by storms, Palawan is generally typhoon- free. Warm weather prevails from March to May , while the coolest months are from December to February. Heavy rainfall is usually experienced in July and August, often accompanied by the southwest monsoon.

Palawan is one of the few relatively peaceful provinces in the country. The crime rate is relatively low and most Palaweños are contented to lead simple lifestyles. Food is abundant to all who are willing to work for a living. The province is a melting pot of migrants from various parts of the Philippines and other countries.