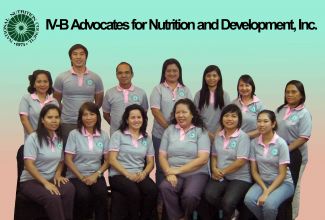 April 29-30, 2013 marks another milestone for the MIMAROPA Region as Provincial, City and Municipal Nutrition Action Officers in MIMAROPA convened to organize the Region’s Nutrition Action Officers Association. After a series of brainstorming, the group named its association, IV-B Advocates for Nutrition and Development Inc., as they aim to be catalyst for the development of nutrition programs in MIMAROPA by ensuring collaboration and integration of all stakeholder’s efforts.

IV-B Advocates for Nutrition and Development, Inc. is now being headed by Dr. Leonor M. Nuñez-Daite, Municipal Health Officer & Municipal Nutrition Action Officer (MNAO) of the municipality of Roxas & MNAO President of Oriental Mindoro. Other elected officers are as follows:

The newly elected officers is tentatively scheduled to take their oath this June 2013 during the  2nd Quarter Meeting of the Regional Nutrition Committee of MIMAROPA.