This year’s theme focuses on intensifying public awareness on child’s rights reminding all sectors of the community has the responsibility in nurturing Filipino child to become an accomplished person and provide protection to her/him at all cost.

The participants enjoyed the Basic Children Disaster Risk Reduction Management by Mr. Jose Rino P. Labay, OIC-PDRRMO of Marinduque in which he presented different animated stories showing the do’s and don’ts during disasters. This activity paved the way in one of the National Plan of Action for Children (NPAC) Goals making children actively participating in decision-making process affecting their lives. 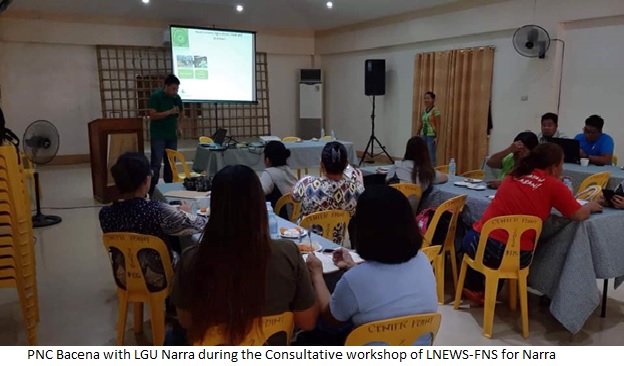 The National Nutrition Council-MiMaRoPa Region conducted a consultative workshop and training on Local Nutrition Early Warning System for Food and Nutrition Security (LNEWS-FNS) for the municipality of Narra, Palawan on November 19-21, 2019 at Centerpoint, Brgy. Poblacion, Narra, Palawan. The Municipal of Narra, Palawan was chosen to have a LNEWS-FNS program because of: (1) Presence of trained manpower already collecting relevant data that can provide a good foundation for a workable LNEWS; (2) the awareness of local officials about the vulnerability of the municipality and their interest to mitigate food insecurity among affected population; (3) Potential  for successful implementation and use of EWS in local nutrition program management in the local government unit (LGU); and accessibility of the area.

PNC Francis Erik P. Bacena with NO I Ace Van Earl T. Patriarca, gave a consultative workshop to the LGU officials of Narra, Palawan. About 15 participants attended the workshop that consists of officers and staff in nutrition office, local disaster risk reduction and management officer (LDRRMO), planning officer, agriculture and municipal health officer (MHO) and it was held at Centerpoint, Brgy. Poblacion, Narra, Palawan.  PNC Bacena discussed the objectives of LNEWS and causes of food and nutrition insecurity. PNC Bacena together with the help of the LGU officials, determined the sentinel barangays where household level monitoring of hunger and food insecurity will be done. 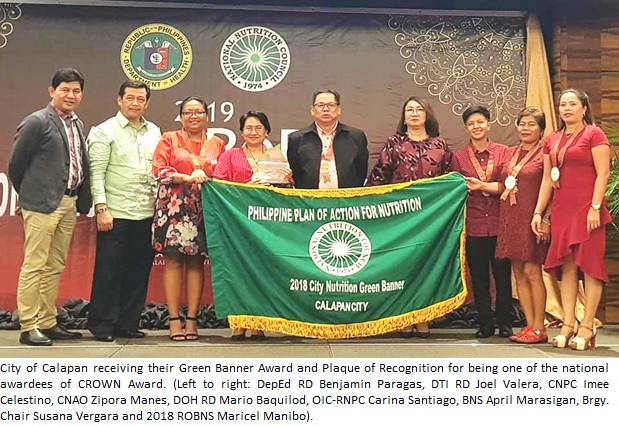 Brgy. Suqui of Calapan City was hailed as the 2018 Regional Outstanding Barangay Nutrition Committee. They were followed by Brgy. Puting Buhangin in Boac, Marinduque and Brgy. Panacan, Narra Palawan for the 2nd and 3rd place, respectively. Brgy. Bancao-Bancao, Puerto Princesa City, Brgy. Tabugon, Sta. Fe, Romblon and Brgy. Paclasan, Roxas, Oriental Mindoro were among the finalists for the 2018 Search for ROBNC.

Outstanding municipalities for each province of MiMaRoPa were also recognized during the awarding ceremony. Municipalities of Naujan in Oriental Mindoro, San Jose in Occidental Mindoro, Mogpog in Marinduque, Odiongan in Romblon and San Vicente in Palawan were the municipalities that excelled in nutrition program implementation in their respective provinces.

In lieu of the Green Banner Award, Certificates of Quality Nutrition Program (QNP) were awarded to Marinduque Province, Calapan City and Municipalities of Mogpog, Marinduque and Odiongan, Romblon. QNP is given to LGUs whose nutrition program implementation is on track as proven by their overall accomplishments and compliance to 2018 nutrition standards. 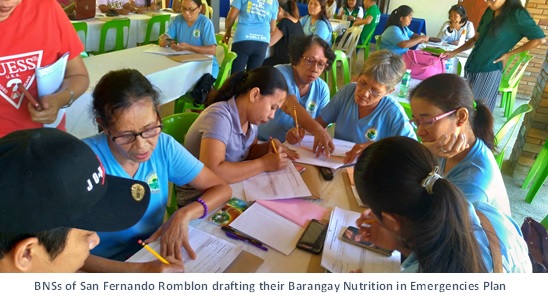 Mr. Harley Rolex of MDRRMO presented the emergency management system of the Municipality of San Fernando in preparedness and response to emergencies. He also presented the hazards and risks of the municipality of San Fernando. This is followed by the module on basic principles on how disasters and emergencies affect the nutritional status of individuals by Nutrition Officer III Edzell Arcinue. Furthermore, Nutrition Officer I Bianca Estrella discussed ways to conduct nutritional assessment and its importance while DNPC Merely Bayang explained the significance of infant and young child feeding emphasizing the exclusive breastfeeding and appropriate complementary feeding during emergencies. NO III Arcinue discussed the necessary micronutrient supplementation during disasters and emergencies.

The following day, chosen groups presented the assigned skit about the simple rapid assessment of infant and young child feeding practices in which the scenarios include exclusive breastfeeding, mixed feeding and non-breastfeeding practices of mothers. Right after, the session was continued with the topic on supplementary feeding by NO III Arcinue followed by Nutritionist-Dietitian II Nicole Tansingco about the nutrition interventions to be provided for identified cases of acute malnutrition in emergency affected area. The last session was planning for nutrition and emergency preparedness response plan facilitated by NO III Arcinue. Each barangay and the MNC in partnership with MDRRMO were tasked to draft an NiEm Preparedness and Response Plan based on the inputs they gained from each session. Three barangays were randomly chosen to present their plan.

Palawan and Puerto Princesa City Train for Nutrition in Emergency

On the first day, the training started with invocation followed by National Anthem and MiMaRoPa Hymn. Mr. Benedict Basaya, Nurse III of City Health Office, gave his welcome remarks for the attendees. Before the training started, the participants had their pre-test to determine how much they know about nutrition in emergencies. Discussions began with Mr. Arcinue by giving an overview of Nutrition in Emergencies to give the participants an idea about the training. He also conferred the Nutrition Cluster in local government units which intends to ensure the nutritional status of affected population especially the most vulnerable group will not worsen or deteriorate due to the impact of emergency and disaster through linking with other cluster/ sector groups and establishing capacities at all levels. Mr. Patriarca discussed different and simplest nutrition assessment that can be done during the emergency to monitor the nutritional status of the affected population. On the otherhand, Ms. Solidum shared her expertise on Infant and Young Child Feeding in Emergencies. She focuses on the importance of exclusive breastfeeding even in emergencies.

Mr. Timbancaya from CDRRMO started the discussion on the second day of the training. He shares his knowledge on Disaster Risk Reduction and Emergency Management System. He gave an overview on the nature of the different hazards and vulnerabilities in the country. His discussion was followed by Mr. Arcinue on Micronutrient Supplementation during emergencies and Supplementary Feeding Program by Mr. Patriarca.