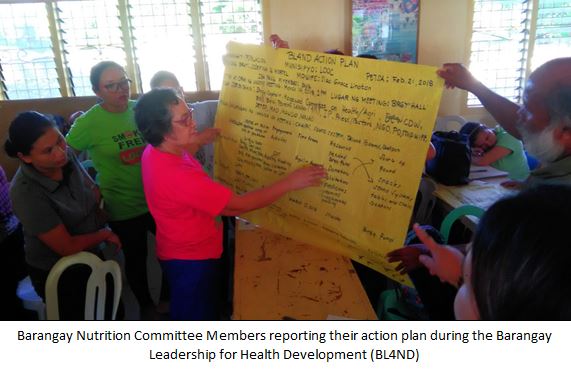 The local government unit (LGU) of Looc, Romblon in partnership with Zuellig Family Foundation (ZFF), assistance from the National Nutrition Council (NNC) MiMaRoPa, and under the leadership of Honorable Mayor Leila M. Arboleda endeavored to intensify the nutrition programs in the barangays of Looc, Romblon through the conduct of Barangay Leadership for Nutrition and Development (BL4ND) Training last 22-23 February 2018 at KOICA Hall, Looc, Romblon.

Representatives from the National Nutrition Council (NNC) Region IV answered the call of Palawan Province to assist in providing nutrition interventions including identifying cases of Moderate Acute Malnutrition (MAM) and Severe Acute Malnutrition (SAM) among preschool children, pregnant and lactating women to Barangay Mangsee in the municipality of Balabac, which was hit by Typhoon Vinta and Agaton last December 2017. 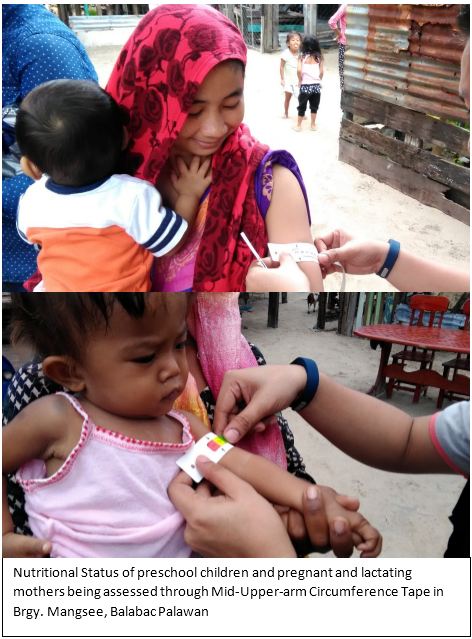 With the aid of barangay volunteer Mr. Amir T. Musa, NO II Bacena and Paglinawan conducted Rapid Nutrition Assessment using the Mid-Upper Arm Circumference (MUAC) tape to easily identify SAM and MAM cases among preschoolers and pregnant and lactating women in Brgy. Mangsee. Based on the MUAC screening, out of 748 preschoolers screened, 624 (94.80%) are normal, 31 (4.71%) are MAM cases while 3 (0.45%) are SAM cases. For pregnant and lactating women, out of the 171 screened, one (0.54%) pregnant and 9 (5.26%) lactating mothers have MUACs measured below 21 cm. MUAC for pregnant and lactating below 21 cm is considered as nutritionally-at-risk and needed to be referred to a health station for consultation and provision of necessary intervention such as Micronutrient Powder (MNP), iron with folic acid supplements and be enrolled in Supplementary Feeding Program (SFP).

Read more: NNC MIMAROPA AND THE PROVINCE OF PALAWAN IN PROVIDING NUTRITION RESPONSE TO TYPHOON-HIT ISLAND OF BALABAC

MiMaRoPa Stakeholders Pledged to Beat Malnutrition with the PPAN 2017-2022 In search for better methods to address the nutritional problems in the region, NNC MiMaRoPa officially unveiled the updated Philippine Plan of Action for Nutrition (PPAN) 2017-2022 for the stakeholders of MiMaRoPa region last 24 November 2017 at the Manila Grand Opera Hotel. The event was attended by Local Chief Executives (LCEs), Nutrition Action Officers (NAOs), District/City Nutrition Program Coordinators (D/CNPCs), Regional Nutrition Committee (RNC)/Regional Technical Working Group on Nutrition (RTWG), PROMO Nutrition Communicators and other nutrition stakeholders in the region. An exhibit of the PPAN Objectives, Strategic Thrusts, and the Nutrition-Specific Programs was also unveiled during the activity.

PPAN 2017-2022 is the country’s framework for nutrition action and serves as a guide for national governments, local government units, non-government organizations, development partners and other stakeholders who want to be involved in nutrition action as it lays the targets, directions and priority actions to address malnutrition particularly stunting and wasting, micronutrient deficiencies and obesity. 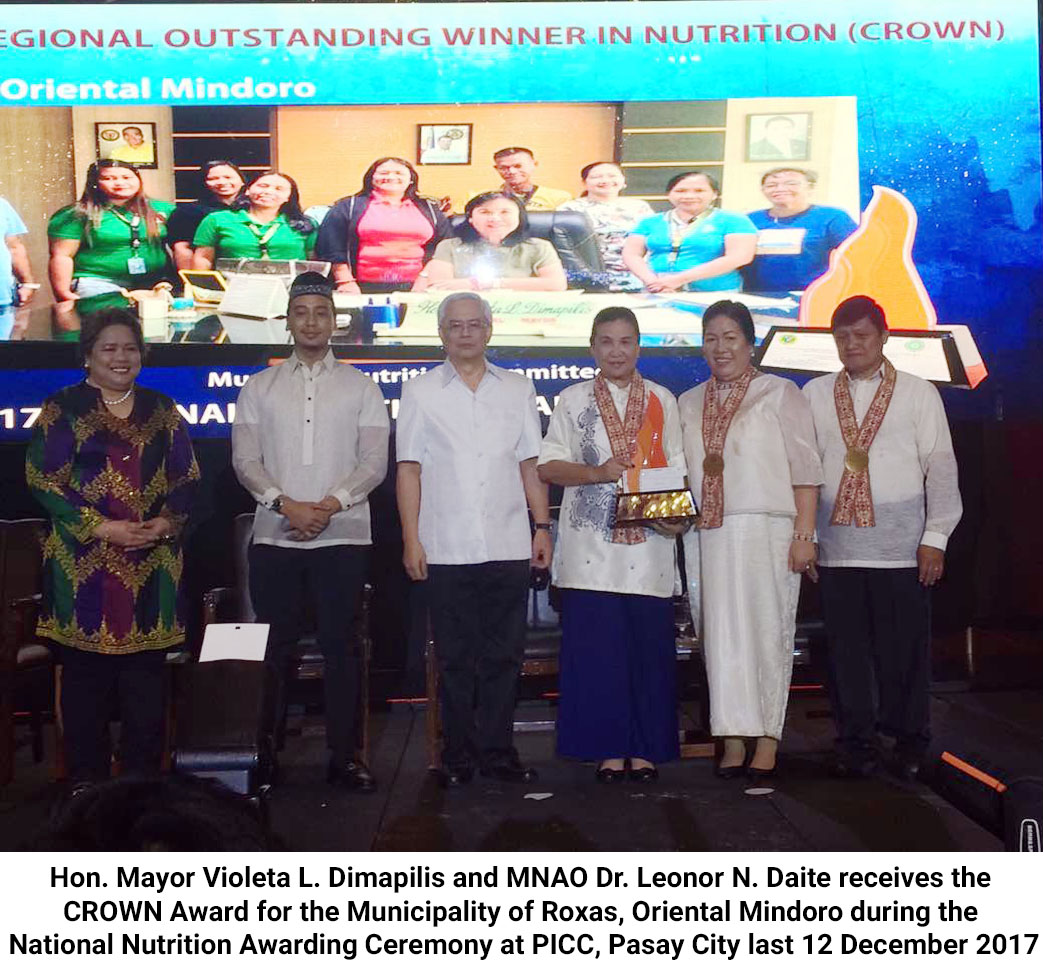 Since 1999, Roxas is already an active player in nutrition program implementation in MiMaRoPa. However, due to the different factors affecting the efficiency and effectiveness of nutrition programs, they were not able to achieve the CROWN Award in the previous years. Currently, the nutrition program implementers of Roxas exerted all efforts and exhausted all possible means to uplift the total well-being of the citizens in the municipality. This is further enhanced by the unwavering support and effort given by Roxas’s Local Chief Executive (LCE), Honorable Mayor Violeta L. Dimapilis who not only states her support for the nutrition programs but also actively participates in its implementation in the municipality.

The Municipal Nutrition Committee (MNC) of Roxas promotes inclusive growth, urging the participation not only of the MNC members but also of the other stakeholders and beneficiaries in the process. They are guided by their vision to become the Center of Trade, Commerce and Industry in Southwestern Mindoro: A Promising City through their mission to create a healthy and competitive business climate where agro-industry is prioritized, support infrastructure facilities, and utilities are put in place, public safety is insured, and People’s participation in development is strengthened through functional development councils. With this, Roxas not only successfully achieved their targets through the years but also surpass their goals through innovative program implementation in the municipality.

Roxas successfully reduced the prevalence of malnutrition among preschoolers such as underweight from 4.65% in 2014 to 2.82% in 2016; stunting from 20.16% in 2014 to 10.58% in 2016; wasting from 4.37% in 2014 to 3.46% in 2016; and overweight/obese from 2.16% in 2014 and 1.55% in 2016. These results were achieved through collective efforts of the LGU as well as the utilization of different partners in nutrition such as Non-Government Organizations (NGOs), municipal government agencies, and other private institutions in nutrition program implementation and advocacy campaigns in the municipality.

The CROWN award is just a first step towards attaining the LGUs goals, but the efforts and burning desire of the MNC can go miles in achieving zero malnutrition in Roxas, Oriental Mindoro.//jlbv 22 August 2017 – To recognize the efforts of the stakeholders in the region, the National Nutrition Council (NNC) MiMaRoPa held its annual Regional Nutrition Awarding Ceremony at Acacia Hotel, Muntinlupa City to acknowledge the partner Local Government Units (LGUs) and agencies in improving the nutrition situation in MiMaRoPa. This awarding ceremony is the culmination of several months of Monitoring and Evaluation of Local Level Plan Implementation (MELLPI) participated in by the Regional Nutrition Evaluation Team (RNET) which is composed of representatives from different regional line agencies of MiMaRoPa. Along with NNC MiMaRoPa, evaluators assessed the nutrition program implementation of the nutrition committees from the provincial up to the barangay level. Deliberations for the most outstanding LGUs, Municipal Nutrition Action Officers (MNAOs), Barangay Nutrition Committees (BNCs), and Barangay Nutrition Scholars (BNSs) was finalized last 29 June 2017 at AurumOne Hotel, Makati City. 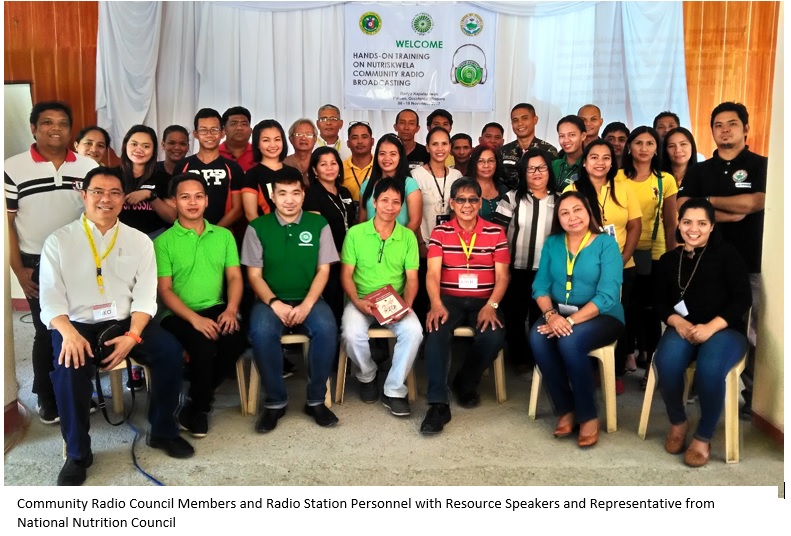 Honorable Mayor Michael Pangilinan inaugurated the signing-on of Nutriskwela Radyo Kapalayawan DWNH-FM 100.1 FM during the closing program of 3-day Hands-on-training on Nutriskwela Community Radio Broadcasting on October 7 – 10, 2017 at Paluan Municipal Gymnasium, Paluan, Occidental Mindoro.
The hands-on-training was attended by the members of the community radio council composed of representatives from various sectors of the municipality such as the Women’s Association, Senior Citizen’s group, Farmers group, the academe, and the local government unit of Paluan. The training was administered by MQ Media Zone Production, a media company commissioned by the National Nutrition Council to set-up community radio stations and provide capacity building for the Nutiskwela Community Radio Network Program. The trainers and facilitators were distinguished speakers in the field of radio broadcasting and journalism such as Mr. Andy Vital, a former radio broadcaster of DZRH, Mr. Louie Tabing, radio broadcaster of DZMM, Mr. Francis “Kiko” Flores and Ms. Mackay Quadra of MQ Media Zone. The National Nutrition Council was represented by Mr. Francis Erik P. Bacena, Nutrition Officer I of NNC – MiMaRoPa.