Operation Timbang is the mass weighing of all preschoolers aged 0-71 months. It is conducted annually from the beginning of the year up to June by a team composed of Barangay Nutrition Scholar (BNSs), Rural Health Midwife, Barangay Health Workers (BHW) barangay officials and other community members. Along with identifying the nutritional status of pre-school children, OPT is a valuable source of useful information for formulating nutrition action plans. 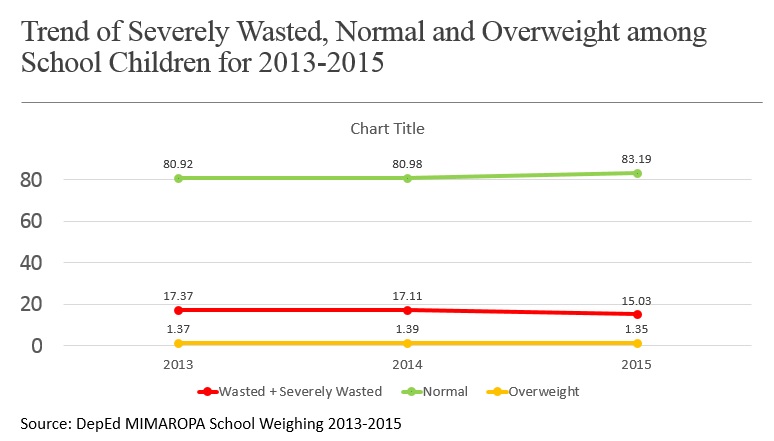 Aside from OPT, results from school weighing of Department of Education - MIMAROPA also show a decreasing trend of wasting or thinness among grade-schoolers from 17.37% in 2013 to 15.03% in 2015.

On March 4, 2016, NNC-Mimaropa together with other members of the Regional Bantay Asin Task Force (RBATF) was summoned by the Occidental Mindoro Provincial Bantay Asin Task Force (PBATF) to a meeting to discuss strategies in strengthening the role of the task force and improving its implementing mechanisms. Current policies and programs to address iodine deficiency disorders in the country were reviewed, as well as role clarification and delineation of each member agency/department. Specifically, some of the provisions of Executive Order No. 14-09-14 s. of 2014 creating the Provincial Bantay Asin Task Force for Occidental Mindoro were amended, to include other members such as the Philippine Ports Authority, Philippine Coast Guard and the Department of Health. The group also agreed to revisit and update the ordinance on the ASIN law passed by the SP sometime in 1995. 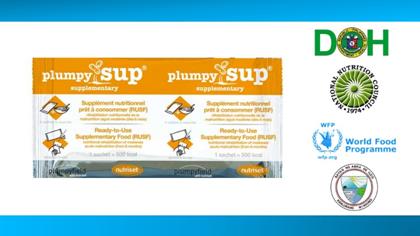 World Food Programme (WFP), the world's largest humanitarian agency fighting hunger and promoting food security, is partnering with NNC Mimaropa in a project entitled “Prevention of Wasting (Acute Malnutrition) in the Calamity and El Nino-affected and selected areas in the Philippines.” Having a pervasive number of acutely malnourished children among other regions, which might have been worsened by the recent hit of typhoon Lando and Nona and the impending El Niño, the World Food Programme listed MIMAROPA as one of the regions to benefit from the said project.

Having recognized the honor that the said nutrition champions brought to the region, the National Nutrition Council MIMAROPA endorsed for the special recognition of the nutrition champions to the RDC. The RDC then agreed and approved the motion requested by the NNC, thereby issuing the RDC Resolution No. 2015-053-455 – “Recognizing the Municipality of Mogpog, Marinduque as a Consistent Regional Nutrition Awardee” and RDC Resolution No. 2015-053-454 – “Recognizing Ms. Mary Karen V. Dueñas as a National Outstanding Barangay Nutrition Scholar Finalist.”

Both were conferred their awards during the National Nutrition Awarding Ceremony held on 28 October 2015 at the Philippine International Convention Center (PICC). They were recognized for their outstanding performance in nutrition program management, delivery of nutrition services and unyielding efforts to help fight malnutrition. Moreover, for this year, the Municipality of Mogpog, Marinduque will be vying for the Nutrition Honor Award (NHA), the highest award given by the NNC to LGUs.

The RDC is the primary institution to coordinate and to set the direction of all efforts for economic and social development in the region. It is also a forum where local initiatives can be related and integrated with national development activities. 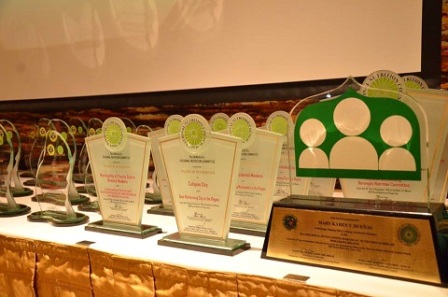 Mangyans are a peaceful yet reclusive group of indigenous people who reside in remote areas of the Mindoro Island. This poses both a challenge and an opportunity for the Municipal Health Office of Abra de Ilog in the delivery of various health and nutrition services. Despite this barrier, the Municipal Health Office of Abra de Ilog continues to reach out to the community of Mangyans. One of the instances that have shown their dedication in bringing health services and eliminating malnutrition in the community is teaching a Mangyan mother to perform Kangaroo Mother Care on her low-birthweight infant.