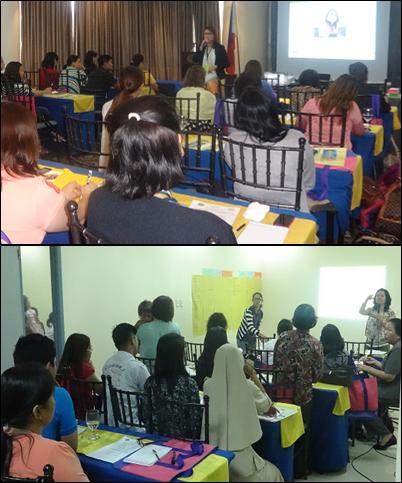 The Training on Nutrition Program Management aimed to capacitate nutrition managers at the provincial and municipal levels in the planning and managing of local nutrition programs while the Training of Trainers on the Basic Course for Barangay Nutrition Scholar was aimed to enhance the capability of nutrition workers and local nutrition committee members in training and supervising Barangay Nutrition Scholars for the effective performance of their roles and functions. 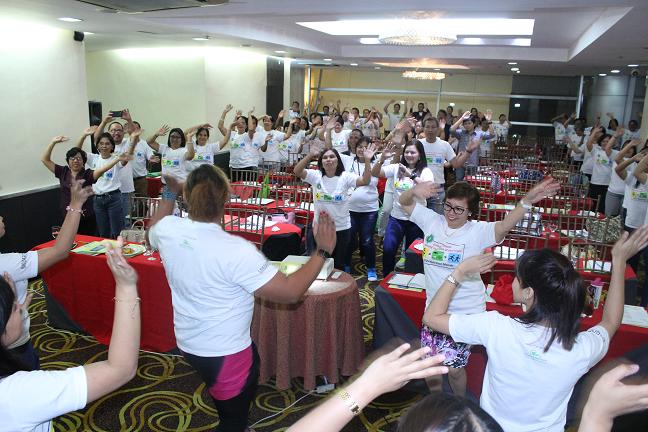 Managers representing the media group, PROMO NutriCOM gathered at Greenhills Elan Hotel Modern, San Juan City to celebrate the 41st Nutrition Month focused on the theme: “Timbang iwasto, sa tamang nutrisyon at ehersisyo!". The event aimed to further widen the awareness on the role and importance of proper nutrition and physical activity in the prevention of overweight and obesity.

The advocacy meeting seeks to obtain the commitment of stakeholders in Abra de Ilog to reduce the incidence of malnutrition in the municipality as they have the highest malnutrition prevalence rate (MPR) in the region based on 2012 Operation Timbang (OPT) Results. As Chair of the Municipal Nutrition Committee, Mayor Constantino, committed to focus on the nutrition situation of his municipality and to further their “ugnayan” to understand its root causes while NNC-MIMAROPA included Abra De Ilog in the selected list of municipalities of Occidental Mindoro for inclusion in the 4-day planning workshop to assist them draft a municipal nutrition action plan and to prioritize Abra de Ilog in the allocation of selected IEC materials.

Mayor Eric Constantino led the signing of commitment to alleviate hunger and reduce the malnutrition in his municipality. 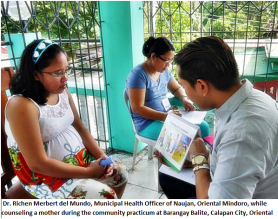 The National Nutrition Council - MIMAROPA completed the successive Orientation on Mobilizing Community Support for the Infant and Young Child Feeding (IYCF) Program for the provincial, city and municipal level of Oriental and Occidental Mindoro, Marinduque, Romblon, and Palawan during the month of October. This orientation aims to equip local health and nutrition workers — Municipal Nutrition Action Officers (MNAOs), nurses, midwives and doctors in preparation for the barangay-level roll out of this activity and, thus, to successfully implement the IYCF program through the establishment of peer counseling support groups and other support systems for the promotion of breastfeeding and proper complementary feeding in their locale.

Aside from tackling independently the steps on how to organize an Infant and Young Child Feeding friendly locale, the training also focused in enhancing the counseling skills of health and nutrition workers through role playing sessions and actual counseling of mothers in the barangay using the “Gabay sa Wastong Pagpapasuso at Pagpapakain ng Sanggol at Bata” counseling cards which they find visually enhancing and useful for effective counseling sessions.

Barangay roll-outs of this orientation are scheduled this November, 2013 for chosen model barangays of the provinces of MIMAROPA.

Credits to Dr. Richen Merbert del Mundo for the photo “Free MIMAROPA from hunger and malnutrition through information power” was PROMO NutriCom’s declared final mission statement in a team building workshop last September 12 at Vista Dal Mare Resort, Mamburao, Occidental Mindoro.
The activity which also tackled other organizational concerns such as its Constitution and By Laws, was attended by its Executive Officers, namely: Mr. Voltaire Dequina, President; Fr. Simplicio A. Bonquin, Vice-president, Ms. Daisy C. Clemente, Treasurer, Rubelyn Solis, Secretary, Ms. Ma. Fe A. De Leon, Auditor, and Mr. Edgardo L. Javarez, Public Relations Officer (PRO)
The group also elected its board of directors, consisting of PIA Regional Director Cristina Castillo, Prof. Ryan Batangantang (of Radyo Kaunlaran, Bansud, Oriental Mindoro), and Ms. Gudula Sarsagat (Radyo ng Bayan Palawan - Radio Station Manager.
The officers and board also vowed to commit their time, talent, and resources in the fulfillment of the objectives of the PROMO NutriCom, as they have posted in the Hands of Commitment during the conclusion of the team building activity.
PROMO NutriCom, the local media group organized by NNC-Mimaropa to assist in its efforts to promote good nutrition in the region, includes Palawan, Romblon, Oriental Mindoro, Marinduque, and Occidental Mindoro Nutrition Communicators. It is tentatively scheduled to meet again on 9 – 10 October 2013 in Manila to participate in the Program Implementation Review of the 2012 Local Media Placements and 2014 Local Media Planning. 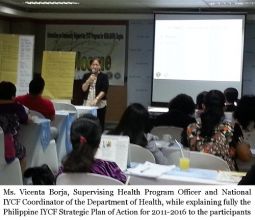 In order to guide communities in strengthening the Infant and Young Child Feeding Program, NNC Region IV-B conducted the Orientation on Mobilizing Community Support for Infant and Young Child Feeding (IYCF) Program last 1 – 4 October 2013 at Eurotel – Pedro Gil, Manila with a total of 26 participants which include key people at the provincial, city and municipal levels on the mobilization of community support for IYCF.

Said orientation is set to be rolled-out in all of the provinces of MIMAROPA this month of October, 2013.