Mr. Frederich Christian S. Tan, Nutrition Officer III of NNC-MIMAROPA, presented the results of the 2012 Operation Timbang and the Revised Nutritional Guidelines for Filipinos. Determined to fight malnutrition in the region, the members of the RNC agreed to converge efforts, focus and prioritize the delivery of health and nutrition related services to the top 20 municipalities in the region with the highest malnutrition prevalence rate.

Also, OIC-RNPC Blanco gave an overview on the simultaneous conduct of the 2013 Monitoring and Evaluation of Local Level Plan Implementation (MELLPI) and Search for the Regional Outstanding Barangay Nutrition Scholar (ROBNS). The MELLPI is an annual activity of the National Nutrition Council (NNC) to assess the efficiency and effectiveness of Local Government Units (LGUs) in the implementation of local nutrition programs. The RNC Chair solicited the support of each member of the Committee by allowing their respective Regional Evaluation Team member to join the said activity.

Final copies of the RNC-MIMAROPA’s Strategic Plan for 2012 – 2016 were provided to the members of the RNC during the said meeting. 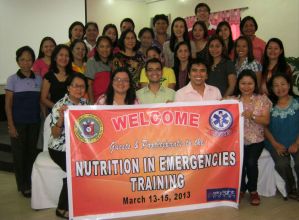 The training is designed to equip participants with expertise needed to lead or support nutrition responses in emergencies. The course presents the spectrum of presenting interventions to prevent and address the problem of malnutrition among the affected communities during emergencies. 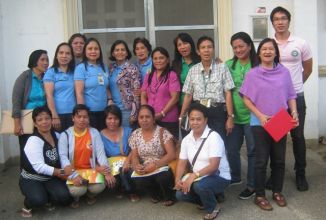 Boac, Marinduque – The National Nutrition Council Mimaropa starts the year with the conduct of One-Day WHO CGS Training last 16 January 2013. It was participated by PNAO Robie Sosa, 5 District Nutrition Program Coordinators (DNPCs), 6 Municipal Nutrition Action Officers (MNAOS), and 2 Barangay Nutrition Scholars (BNSs). Participants were oriented on the use of length/height board and how to properly fill-up the Early Childhood Care and Development (ECCD) Card. Ms. Ma. Eileen B. Blanco, OIC-RNPC; and Mr.Frederich Christian S. Tan, NO III of NNC Mimaropa, facilitated the said training.

Gracing the event were Mr. Francisco Flores of MQ Mediazone Production, OIC Regional Nutrition Program Coordinator Ma. Eileen B. Blanco of NNC-MIMAROPA, PUP President Emmanuel de Guzman, Ph.D, Mayor Ronaldo Morada, and PNAO Norine Dacula. In his message, Honorable Morada thanked the National Nutrition Council for choosing the municipality of Bansud as one of the recipients of the Nutriskwela Community Radio Network Program and committed his unwavering support for the Radio Station.
A 3-day hands-on training was conducted by NNC and MQ Mediazone Production to the five core staff: the manager, technician, program manager, announcer and writer and members of the Community Radio Council.
Highlighting the event was the turn-over of the NTC Permit to operate and the Memorandum of Agreement to the station. A forum entitled “Nutrition Forum in Palawan” was conducted last December 4, 2012 that aims to update the local government units (LGUs) on the present situation of 0-5 years old preschool and 6-10 years old school children in Palawan.

During the said nutrition forum, Officer-in-Charge Blanco presented the Medium-Term Philippine Plan of Action for Nutrition (MTPPAN), Nutrition Officer III Tan lectured on the Guidelines of Operation Timbang while PNAO Paladan discussed the results of the 2012 Operation Timbang (OPT) of Palawan with highlights on barangays with high Malnutrition Prevalence Rate (MPR). Two other resource speakers were also invited namely Ms. Liza Marie Victoria Dillena, Officer-in-Charge of the Health and Nutrition Unit of the Department of Education Region IV-B and Ms. Marilou Galang, Senior Science Research Specialist of the Food and Nutrition Research Institute - Department of Science and Technology. Both discussed the Nutritional Status of School Children in MIMAROPA highlighting Palawan and the Results of the 2011 Updating of the National Nutrition Survey focusing on Palawan, respectively.

It was then followed by an open forum so that municipalities can voice out their health and nutrition concerns. Representatives from different municipalities and provinces accepted the challenge and signed their commitment to alleviate hunger and reduce the prevalence of malnutrition in Palawan on behalf of the Governor and Mayors.

Provincial Health Officer Cruz gave the synthesis and his support in addressing the health and nutrition challenge which the province is facing. He ended by thanking the National Nutrition Council – MIMAROPA and the Provincial Nutrition Office of Palawan as the said forum also served as an opportunity to bring together prime advocates of good nutrition from the 22 municipalities of the province of Palawan.

The RDC-MIMAROPA conducted the Budget Consultation for FY 2014. The activity was attended by Directors and representatives of different regional line agencies (RLAs), Private Sector Representatives (PSRs), and Planning Officers of the 5 provinces and 2 cities of the region. Priority programs, projects and budgetary requirements for FY 2014 were presented by each agency for endorsement by the RDC. The activity is done annually to ensure transparency, accountability and implementation of national government and local government units (LGUs) programs