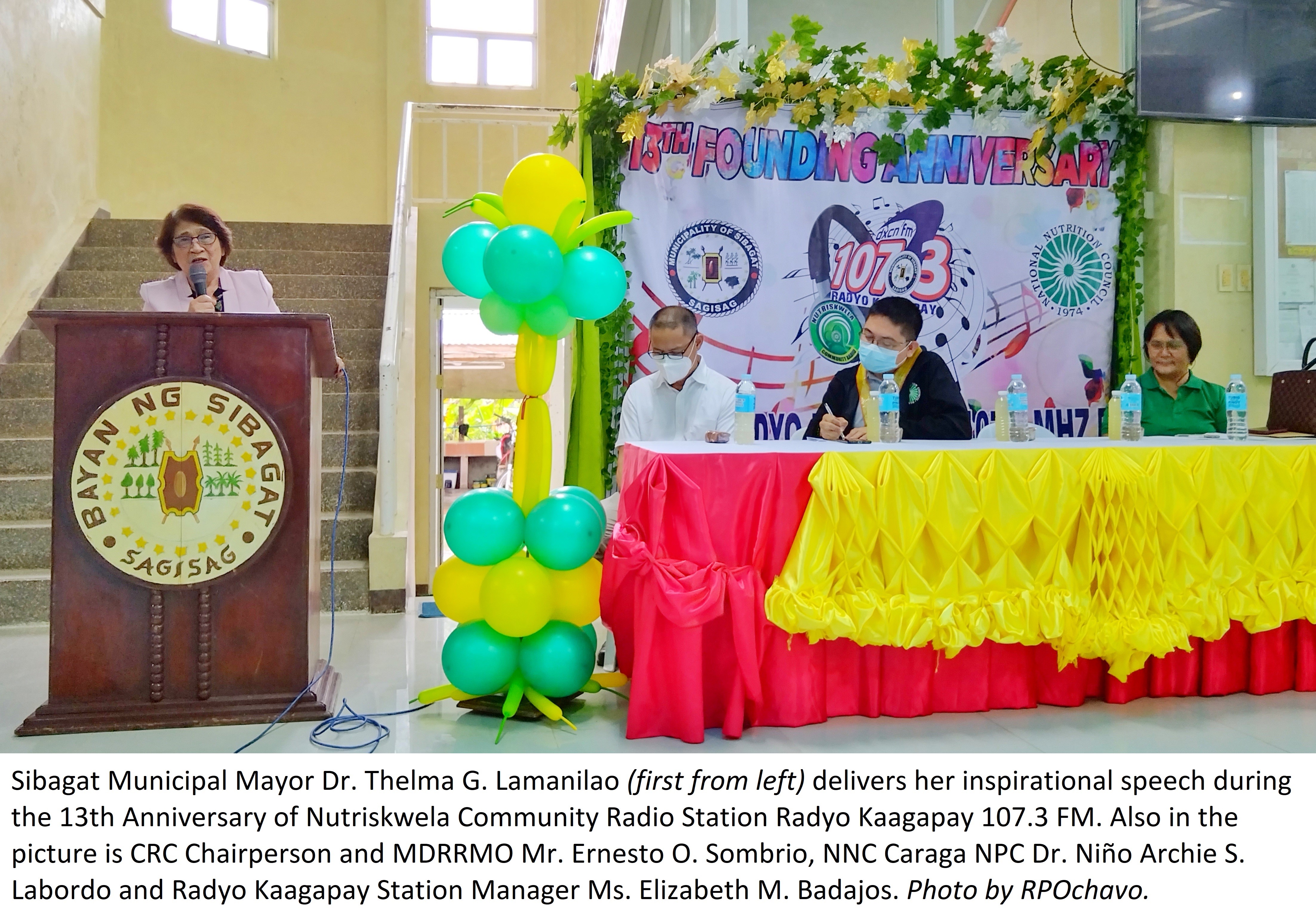 Established in 2008, Radyo Kaagapay first aired its first radio program on 29 January 2010. After 13 years of on-air service to the public, Radyo Kaagapay is proud of its contributions to help achieve the goals of the local government unit and of the nutrition program.

The newly appointed Community Radio Council (CRC) Chairperson, who is the Municipal Disaster Risk Reduction and Management Officer (MDRRMO) of LGU Sibagat, Mr. Ernesto O. Sombrio, welcomed the guests and participants of the anniversary celebration. In his message, he thanked the LGU Sibagat under the leadership of Municipal Mayor Dr. Thelma G. Lamanilao for the trust given to him as the CRC Chairperson, as well as the stakeholders, volunteer broadcasters, support and management staff of Radyo Kaagapay and the listeners for their continued support.

Ms. Rovelyn M. Ordenario, the Municipal Nutrition Action Officer, shared the nutrition situation of the municipality. She proudly reported that the three main malnutrition indicators – stunting, wasting, underweight – are all of low public health significance. She also proudly shared that the LGU Sibagat was awarded with the Green Banner Seal of Compliance, an award given by the National Nutrition Council to LGUs with exemplary performance on nutrition program implementation and management.

10 Kumainments a reference for a healthy liver 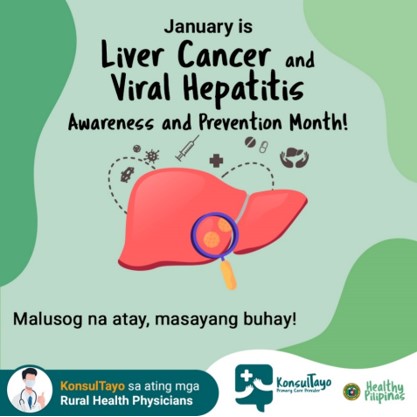 January is Liver Cancer and Viral Hepatitis Awareness Month. This year’s theme is "Malusog na Atay, Masayang Buhay" which raises awareness, emphasizing the importance of the liver and keeping it healthy.

Hepatitis and liver disease impair these functions and can lead to weight loss and muscle loss due to inadequate nutritional intake and/or abnormal nutrient digestion, absorption, and/or metabolism of macronutrients and micronutrients (DeBarmore, B., 2021).

In order to avoid damaging the liver and to keep it healthy, one should follow the 10 Nutritional Guidelines for Filipinos, also known as "10 Kumainments," highlighting the following number (I)Eat a variety of foods every day to get the nutrients needed by the body; (III) Eat more vegetables and fruits to get the essential nutrients needed in the body, particularly the micronutrients, which are vitamins and minerals and fiber for the regulation of body process; (IV) Consume fish, lean meat, poultry, egg, dried beans or nuts for body tissue growth and repair. (VI) Consume safe foods and water to prevent diarrhea and other food-water-borne diseases such as hepatitis A, which can be spread through contact with contaminated food or water, and lastly, (X) Be physically active, make healthy food choices, manage stress, avoid alcoholic beverage and do not smoke to prevent lifestyle-related noncommunicable disease such as liver cancer and/or diseases.

Read more: 10 Kumainments a reference for a healthy liver 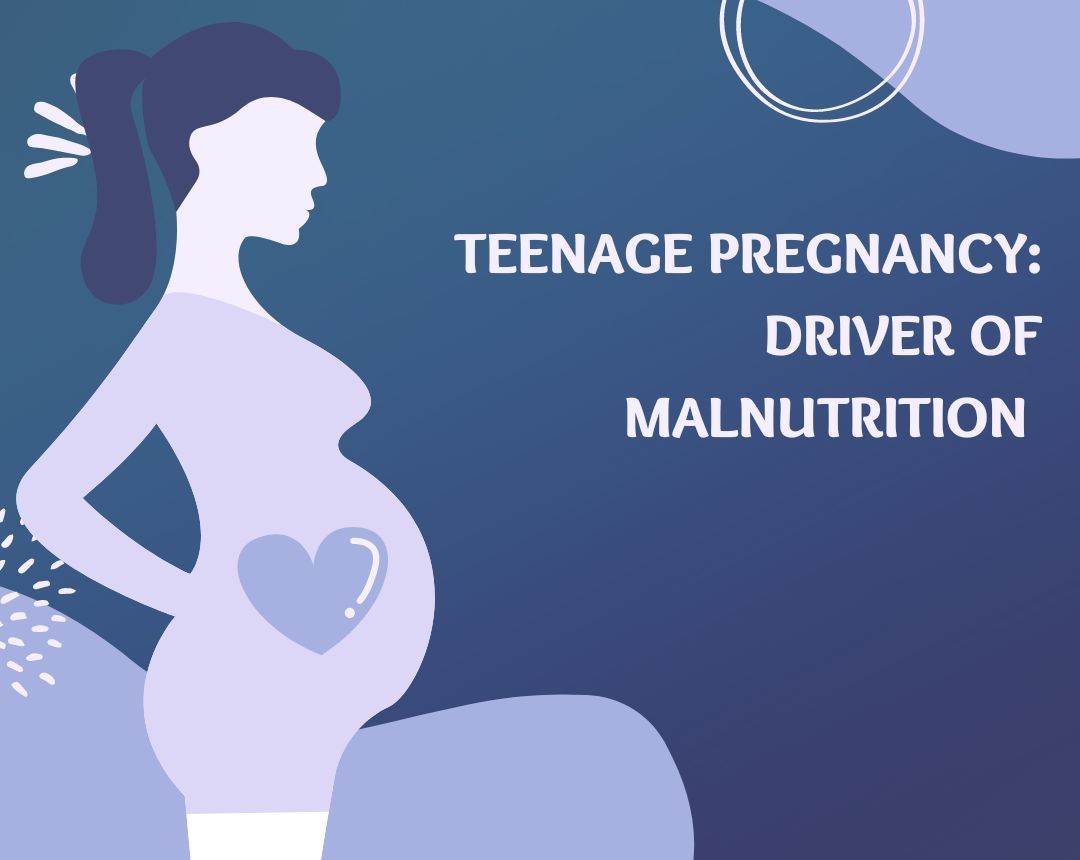 BUTUAN CITY – The Philippine Statistics Authority (PSA) released the latest National Demographic and Health Survey (NDHS) revealing that fewer women aged 15 to 19 are getting pregnant. Teenage pregnancies declined to 5.4% in 2022 from 8.6% in 2012.

By region, Northern Mindanao ranked one in the highest number of teenage pregnancies at 10.9%, followed by Davao at 8.2%, Central Luzon at 8.0% and Caraga at 7.7%.

The survey also revealed that teenage pregnancy was common among who had only completed grade level one to six at 19.1%. Based on the gathered data, PSA said in an interview that the percentage of teenage pregnancy decreases as educational attainment increases.

In a recent publication released by the World Bank, percentage of “nutritionally-at-risk” pregnant women in the Philippines was about 23% in 2019. The publication also highlighted the Expanded National Nutrition Survey (ENNS) 2019 result which showed that pregnant women under the age of 20 are more likely to be deemed nutritionally-at-risk than women above the age of 20. The early marriage and teenage pregnancy can lead to higher maternal and neonatal mortality, low birthweight, and stunting in children. 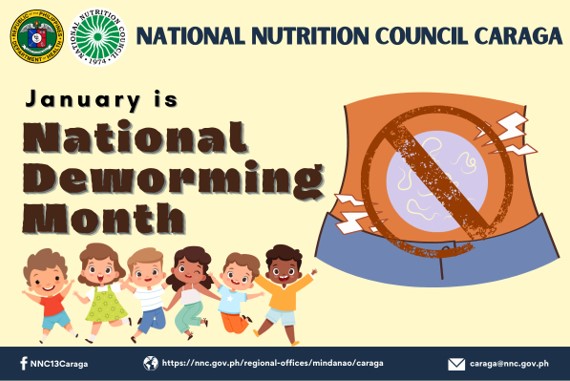 The National Nutrition Council (NNC)-Caraga continues to support the Department of Health (DOH) in its campaign on deworming among children ages one (1) year and older. The program aims to eliminate intestinal parasitism in children that can cause malnutrition.

Malnutrition is directly associated with insufficient dietary intake, with underlying factors such as a lack of safe water, sanitation, and hygiene resulting in recurrent infectious diseases such as diarrhea and intestinal worms that interfere with the digestive process by competing with the host for nutrients and compromising immunity.

Many studies have shown infections with intestinal parasites among children are associated with stunting, physical weakness, and low educational performance. According to a study by UNICEF, the Philippines has a "triple burden of malnutrition," meaning our country has 3 forms of existing malnutrition, one of which is a high prevalence of undernutrition, particularly in the form of stunting in 3.4 million children under 5 years old, and, secondly, micronutrient deficiencies, particularly those of vitamin A, iron, and iodine, which are crucial micronutrients for proper functioning of the body and the development of children. 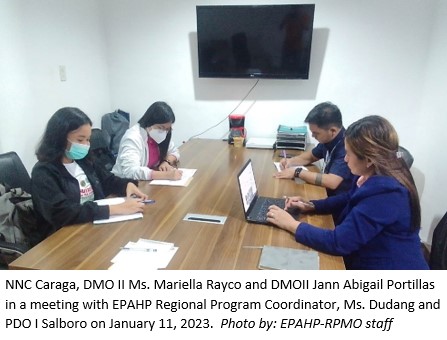 The meeting discussed the community-based organizations (CBOs) in Caraga and its better partnership with the NNCs feeding program in 2023.

Along way to the discussion is the requirements needed in the implementation of the Dietary Supplementation Program (DSP) Tutok Kainan which will be implemented in the identified areas of Dinagat and Surigao del Norte.

Identification of the CBOs shall, however, be coordinated with the Department of Agrarian Reform (DAR) through its EPAHP Focal, Ms. Hazel Bautista.

Likewise, highlighted in the meeting is the renewal of the Memorandum of Understanding (MOU) with the EPAHP. The MOU shall include technical assistance or orientation to farmers and other suppliers on basic health and nutrition concepts. 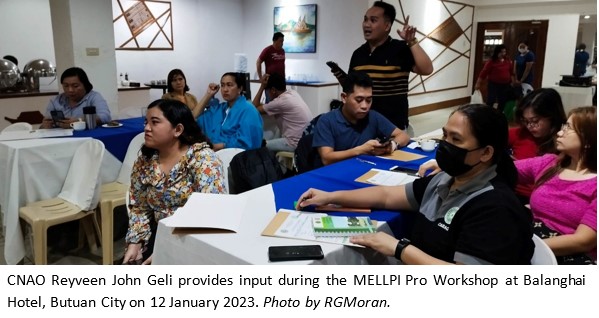 BUTUAN CITY – In a meeting conducted with the Provincial/ City Nutrition Action Officer and District/ City Nutrition Program Coordinators, an orientation and mini workshop on the 2023 Monitoring and Evaluation for Local Level Plan Implementation Protocol (MELLPI Pro) was facilitated on 12 January 2023 at Balanghai Hotel, Butuan City.

The nineteen (19) attendees participated in the activity which aimed to review and line up a timeline for the MELLPI implementation.

2023 will be the third year of MELLPI pro implementation shared by Dr. Labordo. This means that those who have been consistent Green Banner recipients are qualified to be evaluated for the Consistent Regional Winner on Nutrition, Dr. Labordo added.

These are LGUs who have shown exemplary nutrition program implementation reaching the required points in the different nutrition domains.

For this year, the nutrition workers suggested additional recognition(s) with a corresponding detail to be included in this year’s awarding ceremony.