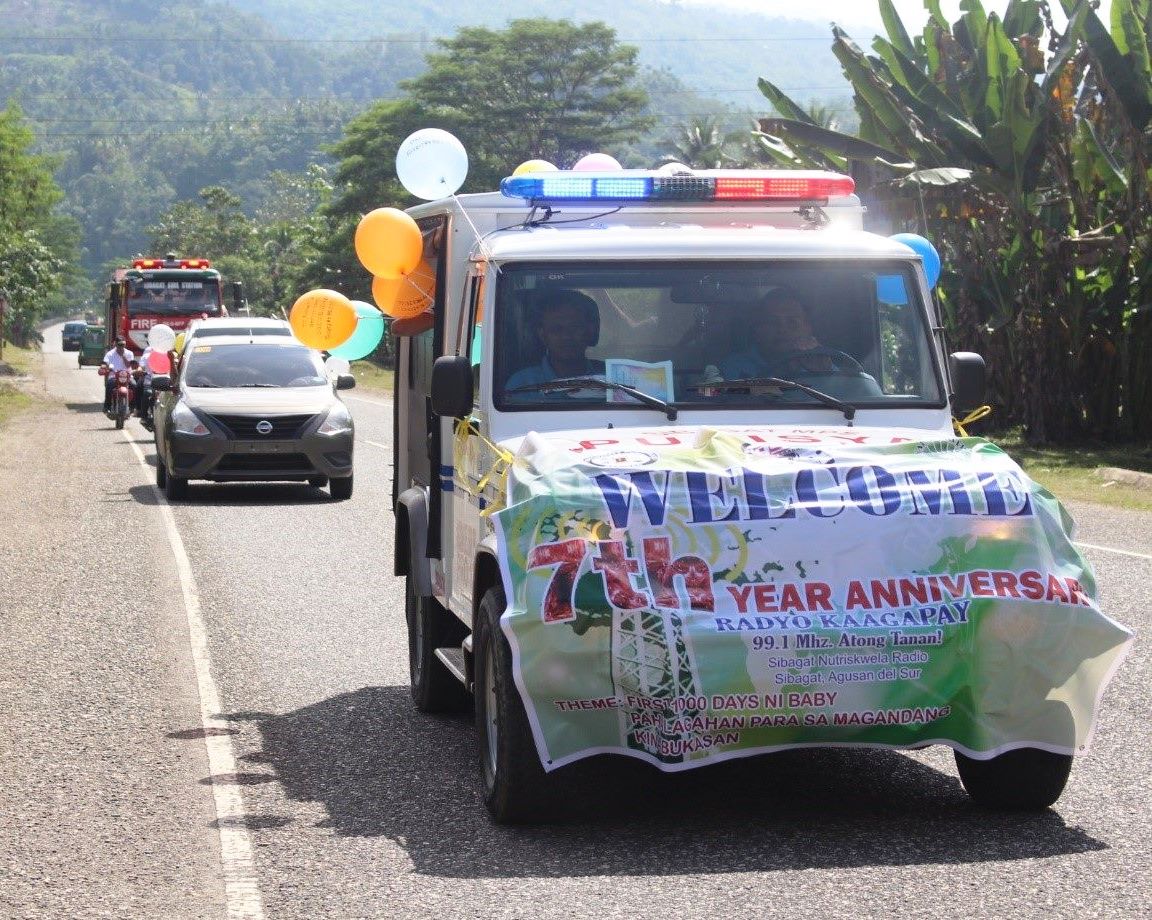 31 January 2017, Sibagat, Agusan del Sur - NNC Caraga joined the celebration of DXCN-FM 99.1 MHz - Radyo Kaagapay’s 7th Founding Anniversary held at the Municipal Hall of Sibagat. The Nutriskwela Community Radio is a Project of the National Nutrition Council to address the problem of hunger and malnutrition in the Philippines by providing correct and updated nutrition and health information to areas with high prevalence of malnutrition and no access to broadcast media. It was implemented in 2008, and Radyo Kaagapay in Sibagat, Agusan del Sur was its pioneering recipient in Caraga. The Celebration started with a motorcade around the municipality, participated by the members of Sibagat Nutrition Committee, Senior Citizens and the Sibagatnon.

Former Mayor and now, Sibagat Administrative Officer, Dr. Thelma Lamanilao is one of the guest speakers of the celebration. She’s one of the people behind the success of Radyo Kaagapay with her constant support from the very beginning to the Nutrition Program and Nutriskwela Radyo Kaagapay. She cited how the DXCN 99.1 Radyo Kaagapay was established in their municipality. The induction of the newly elected Community Radio Council (CRC) Officers was done during the Anniversary celebration, followed by Pledge of Commitment of the officers. NO III Leah Vina P. Vargas gave her message of gratitude to LGU-Sibagat and CRC members and staff of DXCN 99.1 - Radyo Kaagapay for their efforts to sustain the functionality of the nutriskwela station which also contributed to the decreased of malnutrition rate of preschool children from 17% in 2008 to 5% in 2015 by providing current and correct information. Municipal Mayor Maria Liza L. Evangelista shared her thoughts on the importance of the nutriskwela radio to her constituents and neighboring municipalities on the advancement of their knowledge in the field of Nutrition and Health. She firmly believes that a healthy family can contribute to a healthy community that will eventually lead to a much healthier nation. She also challenged the CRC officers to maximize the programs in serving the community and do more to improve the performance of Radyo Kaagapay. Mr. Alberto Latras, the new Chairman accepted Mayor Evangelista’s challenge and asked the listeners for their continuous support and to apply the knowledge they get from the different radio programs. He also acknowledged Dr. Lamanilao for signing the Memorandum of Agreement between NNC and LGU-Sibagat on the establishment of Radio Kaagapay seven years ago.

Before the celebration ended, one way of showing their appreciation to the listeners, DXCN 99.1 Radyo Kaagapay and Local Government Unit of Sibagat distributed AC/DC radios, umbrellas and giveaways to the participants.