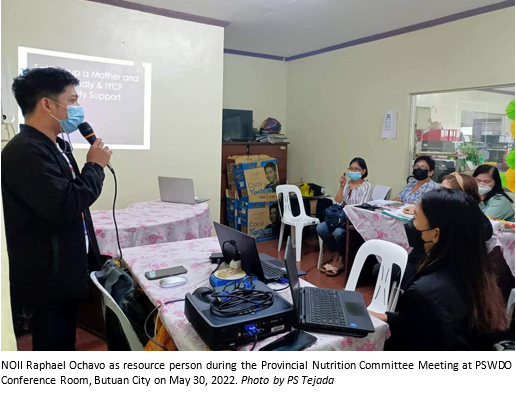 In the Philippines, only one out of five mothers exclusively breastfeed in the first six months. This statistic indicated that there is really a need to organize an IYCF support group especially at the barangay level. Through community support groups, the dissemination of proper child-rearing practices and its reach will widen.

Eight steps are to be followed as guide in organizing a local Infant and Young Child Feeding support groups: First, mapping and identification of possible partners that could make a significant impact in the mobilization of IYCF support groups. Next, the conduct of a community assembly, which will be the avenue to orient the possible partners. The third step is the organizing of volunteers, wherein the roles and responsibilities of the volunteers, local chief executives and the city/municipal tram are determined. The next step is the assessment of IYCF practices in the community which would reveal the level and kind of IYCF practices. After that, orientation of peer counsellors on IYCF concepts, use of IYCF counselling cards, peer counselling methodology and forms to be used. Subsequently, is the formulation of an action plan that would guide the support group on the schedule of activities and its scope. The final step, is the implementation period where the main goal is to roll out the tasks at hand based on the action plan and the last step would be the monitoring, evaluation, and documentation.
In said meeting, Agusan del Norte plans for the creation of an ordinance to expedite the organization and implementation of a local IYCF support group and also the nutrition cluster organization that would help and maintain the IYCF practices even during emergencies. The body have also identified the BHWs, lending groups, Sangguniang Kabataan (SK), senior citizens group and religious groups as possible partners. Moreover, the NAOs suggested that the existing and active Mother’s class, household teaching class and Family Development Session (FDS) to be an avenue to counsel on IYCF and to recruit more volunteers.

Meanwhile, the Municipal Nutrition Action Officer of Nasipit, Ms. Idaline Balanay, shared on the LGUs preparation for the establishment of a mini-milk bank at Nasipit District Hospital.

The NAOs, C/MNPCs and the PNC members believed that the right nutrition in the first 1000 days between a woman’s pregnancy and her child’s second birthday builds the foundation for a child’s ability to grow, learn and thrive. #PNFPRayco