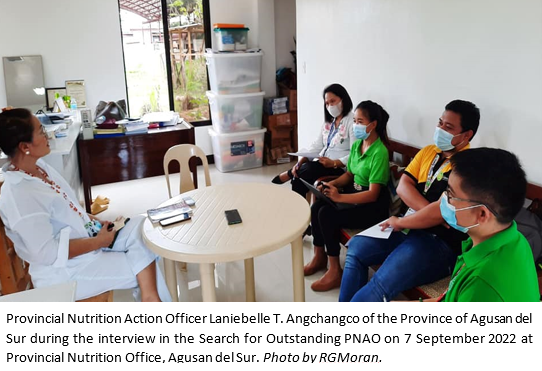 The visit aims to monitor and evaluate the performance of the provincial government and the nutrition focal person in the local level plan implementation for nutrition.

Prior to her career as the PNAO of Agusan del Sur, she became a part of the Bureau of Forestry. But she felt that she had to be in the community, working with people and for the people. With this urge in her heart, after six months, she applied and worked as the Municipal Nutrition Action Officer of the Municipality of San Luis, Agusan del Sur for two years.

Working as the PNAO is not an easy task, added with the situation of becoming a single mother of five children at a young age. However, her situation made her persevere more and made her stronger that she was known as the Iron Lady of her family.

In her line of work, she shared that she found the Nutrition in Emergency program difficult to coordinate and implement because of the limited supplier for the needed resources in the program. Despite of these challenges, PNAO Angchangco still coordinates with its partners in the integration of nutrition programs, projects and activities in the other plans.

On the other hand, the promotion program for behavioral change was easy for her to coordinate and implement. Her strategy involved focus group discussion with the mothers from different municipalities, coordinating with other health offices as facilitators and/ or advisers to give the participants an integrated knowledge on maternal nutrition and text blast or nutri-chikahan on maternal nutrition with health professionals and mothers.

Moreover, it is through her efforts that the Barangay Nutrition Committees of around four hundred barangays were established and have a separate funding for nutrition and nutrition-related programs. As an added bonus, she accomplished and received Consistent Regional Outstanding Winner in Nutrition award as a symbol of her effective leadership wherein this award is to recognize municipalities, cities, or provinces that achieved excellence in nutrition program management

In her 36-years as PNAO and counting, she learned a lot from her experiences, from the previous PNAO and from different officers from National Nutrition Council. According to her, the expertise and knowledge she has on Nutrition Program Management and many other different capacity building activities and trainings were all from working with her mentors and from other Nutrition Action Officers of the Philippines.

The dedication she has reached the ears of other nutrition movers as she was elected as the President of the Nutrition Action Officer Philippine Association (NAOPA) – Caraga and a member of NAOPA in the national level.

All of the experiences and engagements she encountered mold her to be a PNAO that she is now and for her, to be a good leader is to be patient and to be a pusher for good nutrition.

In the context of nutrition program management, the Provincial Nutrition Action Officer of Agusan del Sur, Ms. Angchangco, is considered as a pro and a seasoned nutrition mover.#LuthChristian JaeAbian/MPRayco