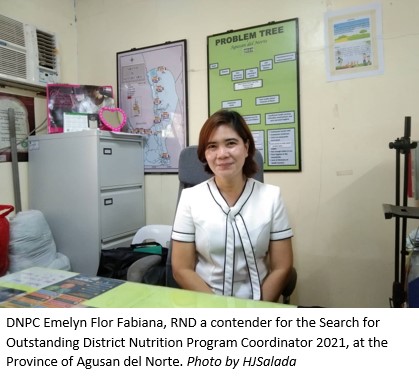 DNPC Fabiana is a Registered Nutritionist Dietitian by profession from Silliman University in Dumaguete City.

The dedicated DNPC is serving the Province of Agusan del Norte for 2 years as per job order (Feb 2019) and was appointed as DNPC in Provincial Social Welfare and Development Office (PSWDO) since January 4, 2022 until present.

God has plans, indeed. Prior to being the DNPC, she lost her business, but God gave her an opportunity to become the DNPC of the Province of Agusan del Norte.

The DNPC joined several trainings to become an effective nutrition officer in the PSWDO and is inspired by working in the community. DNPC Fabiana never fails to work hard because she knows that God has given her the opportunity to help the LGU and the community. The DNPC stated in the interview that she really loves her job so much as she never stops learning and wants to learn more.

According to DNPC, she wanted to strengthen the monitoring on exclusive breastfeeding and complementary feeding promotion as well as advocacy on the promotion of good and proper nutrition for pregnant women during the first trimester and focusing on the nutrition status of each child in the province. According to her, having good communication and relationships with stakeholders will ensure the success of this program.

According to her documents presented during MELLPI, the nutrition status of 0-59 month old and young children is continually decreasing and their documents were well documented.