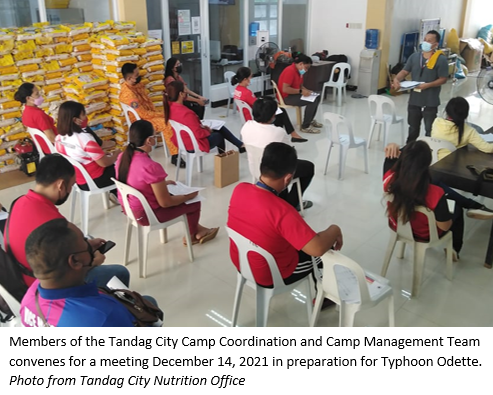 Butuan City- As the PAG-ASA forecast identified Caraga region as area to be affected by tropical storm Odette, the NNC Caraga released through a Regional Nutrition Cluster Advisory No. 06-003 re Nutrition Cluster Preparation for the Potential Impact of Tropical Cyclone Odette on 14 December 2021.

The advisory encourages for the Provincial/City/Municipal Nutrition Cluster to activate its respective Nutrition Clusters and closely monitor the weather condition and be ready for the possible impact of the rainfall particularly to the affected households in the area which may cause displacement specifically the nutritionally vulnerable groups like pregnant women, lactating mothers, infants, preschool children, and elderlies.

Likewise, the advisory mentioned to ready with the prepositioning of the resources for nutrition response and tools that can be used for the rapid nutrition assessment.

In a Department Personnel Oder No. 2007-2492-A regarding the amended creation of the health cluster with subclusters on Nutrition, WASH and Health, the Nutrition Cluster is created to ensure that the nutritional status of the whole population specifically the vulnerable sectors are taken cared of. 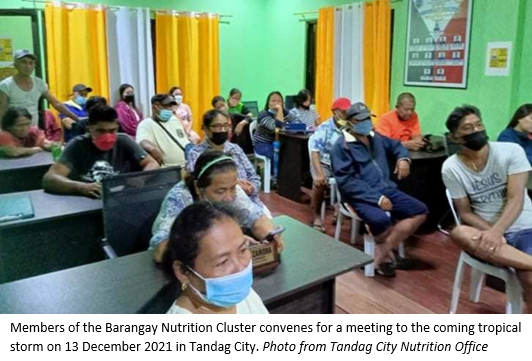 The Nutrition Clusters of the different barangay discussed about the preparation of the incoming typhoon including the inventory of prepositions, evacuation centers, and the roles and functions of each of the member of the team.

In the report of the state weather bureau as of December 13, 2021, the tropical storm with international name Rai was last spotted 1, 6545 kilometers east of Mindanao.

The nutrition cluster aims to ensure that the nutritional status of affected population especially the most vulnerable groups infants, children, pregnant women and breastfeeding mothers, older persons, people with disabilities and debilitating conditions will not worsen due to the impact of disaster. 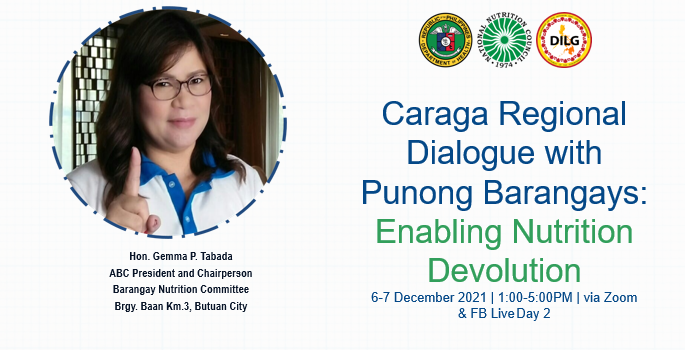 Butuan City- Liga ng mga Barangay President and Chairperson of the Barangay Nutrition Committee, Hon. Gemma P. Tabada of Barangay Baan Km. 3 of this city shared her statement of support on behalf of the Punong Barangays to find innovative means for nutrition program implementation during the Caraga Regional Dialogue with Punong Barangays: Enabling Nutrition Devolution on 7 December 2021 via Zoom Conferencing.

Hon. Tabada who is leading the 86 punong barangays in Butuan City expressed commitment to improve nutrition situation in each of the barangays and local government units in the region.

Being in public service for a quite some time, Hon. Tabada urged other local government units to create and pass ordinances for the benefit of the Barangay Nutrition Scholars (BNS) and Barangay Health Workers (BHW). She mentioned that in her term, an increased amount of honorarium has been provided for the BNSs, BHWs and other health care workers.

As the implementation of Mandanas-Garcia ruling comes 2022 and forward, the good ABC President encourages the LGUs to include in their transition devolution plan the creation of nutrition office with staff so that there is focus on nutrition program management. She added that there is opportunity in the Mandanas-Garcia implementation, and so the planning team should cooperate and collaborate to lay better plans. 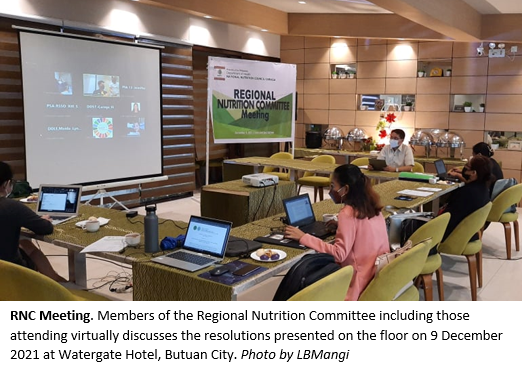 Butuan City- In a recently conducted Regional Nutrition Committee Meeting, the body passed and approved reorganization and operationalization of the Regional Bantay Asin Task Force (RBATF) in Caraga region during its blended meeting on 9 December 2021 at Watergate Hotel, Butuan City.

RA 8172 otherwise known as “An Act Promoting Salt Iodization Nationwide and for Related Purposes”, or commonly called “ASIN Law” seeks to contribute to the elimination of micronutrient deficiencies in the country, particularly the iodine deficiency disorders, through the cost-effective preventive measure of salt iodization.

Specifically, during the discussion, Nutrition Officer Aldrin S. Atienza shared the functions of the team: (1) manage and coordinate the National Salt Iodization Program (NSIP) in the region through the formulation of Annual Salt Iodization (NSIP) Operational Plan; (2) organize Provincial Bantay Asin Task Force and coordinate with stakeholders particularly salt re-packers and traders; (3) advocate the effective implementation of ASIN Law including full support from stakeholders and the community; (4) monitor and evaluate program implementation through meetings for update and to discuss and address implementation problems and issues, visit warehouse of salt distributors and monitoring salt in ports; and; (5) recommend to the Regional Nutrition Committee, National Salt Iodization Program-related regional policies. 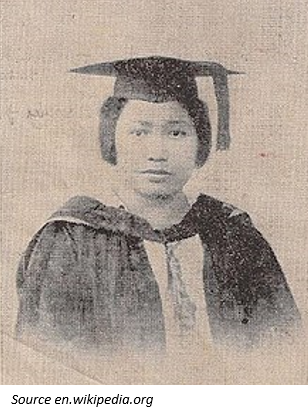 From November 25 to December 10, the world observes the 18-Day Campaign Against Violence Against Women. This year, the Philippines also commemorates the 76th anniversary ending World War II and the Battle for the Liberation of Manila. As we remember the sacrifices of our heroes and the innocent civilians that perished in the war, let us celebrate the lives and contribution of three distinguished women who saved countless lives from starvation and with their innovation, grit, and service for others.

Maria Y. Orosa was a food technologist, pharmaceutical chemist, humanitarian and war heroine who invented calamansi juice powder, banana ketchup, soyalac, and two breeds of fruit-plants called oroval and clarosa. Orosa completed her bachelor's and master's degrees in pharmaceutical chemistry, as well as an additional degree in food chemistry from the University of Washington. She was only 29 years old in the year 1922, when she worked for the Philippine government as the country’s foremost chemist. By 1928, the government was so impressed with her work that they sent her to Holland, England, Germany, Spain, Italy, France, Hawaii to study food technology and food preservation. She became part of the Bureau of Science and the Bureau of Plant Industry.

Maria wanted to help the country become self-sufficient, so she empowered Filipino families by organizing 4-H clubs in the islands and traveling into the barrios to teach women how to raise chickens, preserve local produce, and plan healthy meals. She invented the palayok oven that enabled families without access to electricity to bake, and developed recipes for local produce, including cassava, bananas, and coconut. Her banana ketchup food invention became a favorite condiment and cooking ingredient in the Philippines. She also developed wines and calamansi nip, a desiccated and powdered form of a citrus fruit also used to make reconstituted calamansi juice, and is also used in other recipes. Using both her local and technical knowledge, Orosa made culinary contributions and taught proper preservation methods for native dishes such as adobo, dinuguan, kilawin and escabeche. 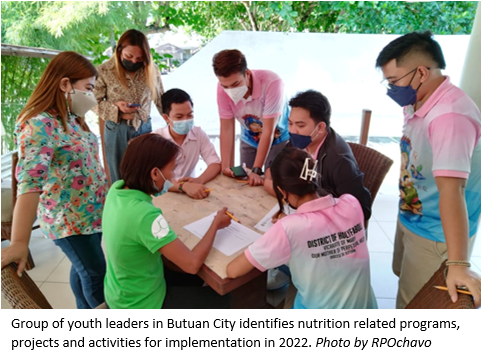 Butuan City- “Let us take part of this action for the support of nutrition devolution, let us bring a zero malnutrition” Hon. Cynth Zephanee N. Nietes, President - Sangguniang Kabataan (SK) Federation of Butuan City in her statement of support during the Day 2 of the Caraga Regional Dialogue with Punong Barangays: Enabling Nutrition Devolution, on 7 December 2021 via Zoom Conferencing.

The Federation President encourages the youth to make nutrition program a priority. She mentioned that activities are not limited to the common youth programs but they can explore more to include nutrition information dissemination through media, forum, symposium and trainings. There is a need for the Sangguniang Kabataan and other youth sectors to be involved with nutrition program and development, Nietes added.

Recently, the youth sector in Caraga has been very active in participating the NNC activities. The SK is one of the listed members of the Scaling Up Nutrition (SUN) movement in the region which will partner in nutrition advocacy dissemination and help in nutrition program implementation of different nutrition related programs, projects and activities at their respective barangays.