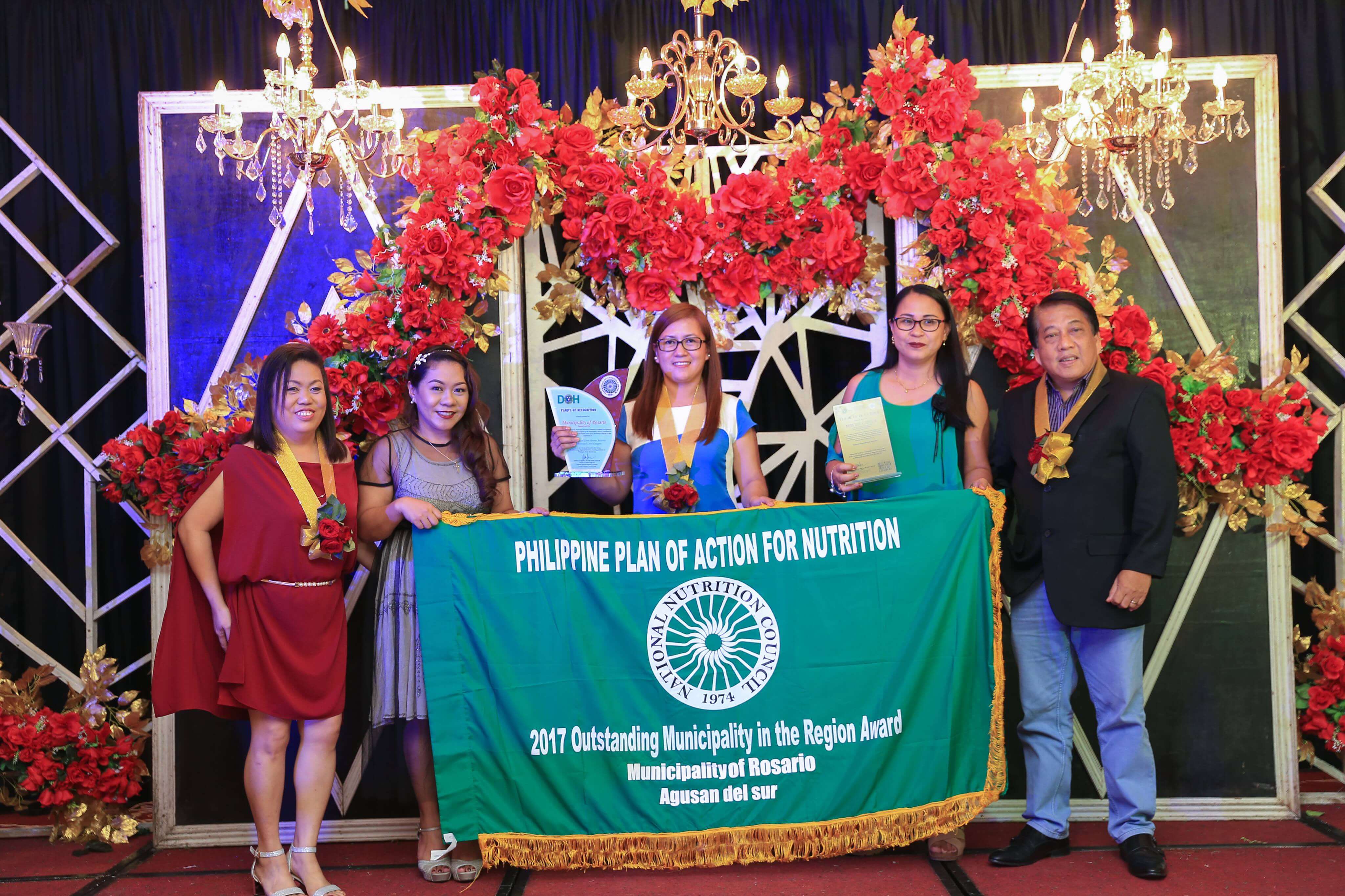 Bayugan City and Municipality of San Francisco bagged the 1st year Consistent Regional Outstanding Winner in Nutrition (CROWN) Award, this award is given to the local government unit who is consistent in implementing the nutrition program with exemplary performance.

The Golden Tara award is given to the Province/Municipality/City who will have the highest percent change and continuous decline of the prevalence rate of malnutrition for the past three years that led to the improvement of nutritional status among preschool children. Golden Tara awardee for provincial level goes to the Province of Surigao del Sur, Butuan City for the city level and Municipality of Kitcharao, Agusan del Norte for the municipal level.

Top-performing Barangay Nutrition Committee was also recognized as well as barangays with a satisfactory performance during the Monitoring and Evaluation on Local Level Plan Implementation.

Certificate of appreciation were also given to non-governmental organizations, National Line Agencies and partners, LGUs and few individual who supports the Local Media Activities and Campaign. 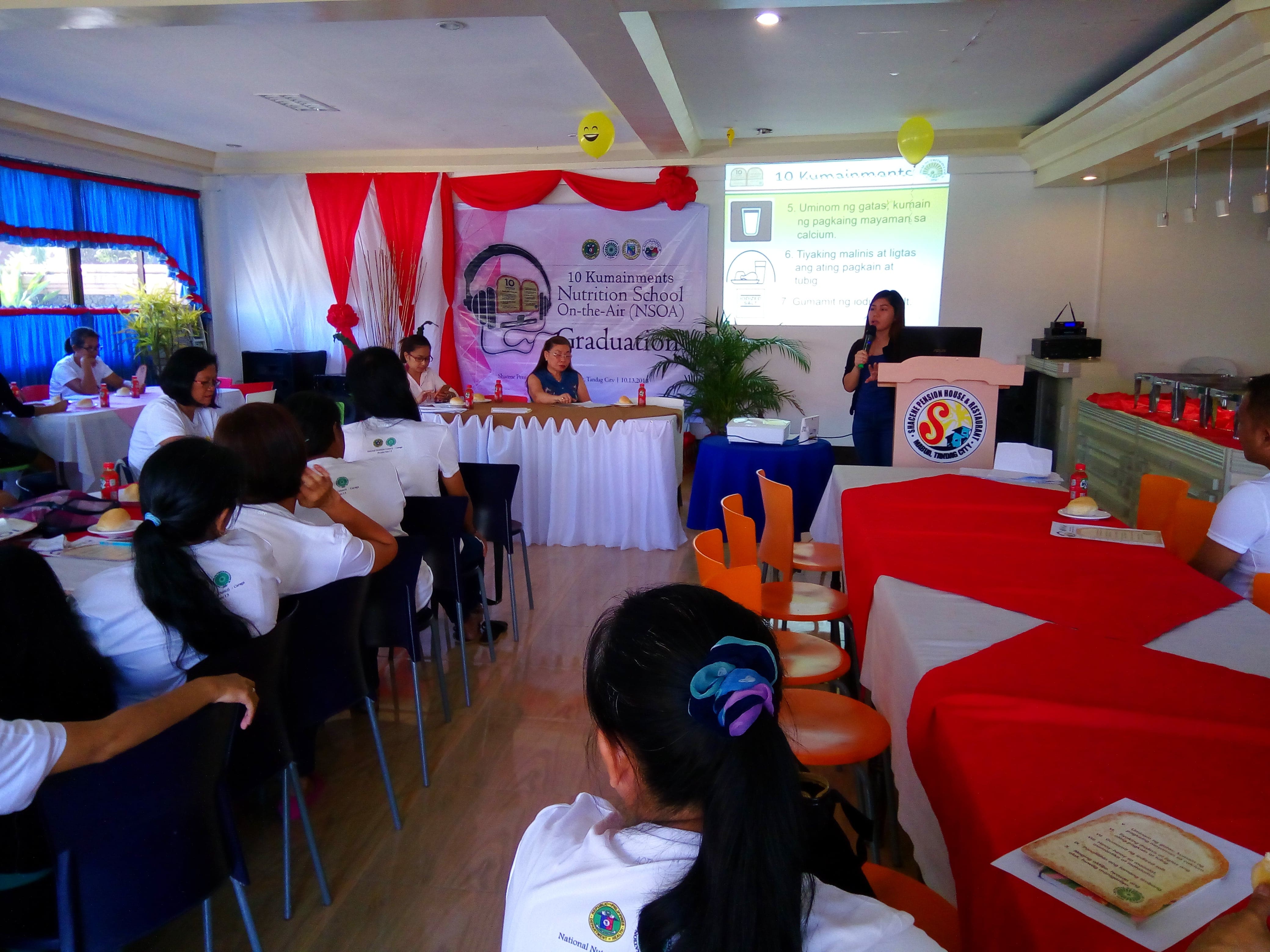 October 14, 2018 – The National Nutrition Council Caraga in collaboration with the local government of Tandag City and Sure FM conducted the Nutrition School-On-The-Air graduation exercise for the 60 students enrolled in the said program. The aim of the activity is to promote and educate the importance of good nutrition and importance of healthy lifestyle thru the discussion of 10-Kumainments.

The Nutrition School-On-the-Air (NSOA) is a nutrition promotion module developed by the National Nutrition Council followed by the implementing station to create public awareness and adopt good nutrition. It has 12 sessions on 10 Kumainments. There's a Question and Answer portion after every episode to determine the learnings of the students; cellular phone load were given as prizes for the students who were able to answer the question correctly and they were able to claim their prizes during the graduation.

Hon. Imelda C. Falcon, Sangguniang Panlungsod member and Vice chairperson of the committee on health and nutrition welcomed the students during the graduation. And the Provincial Nutrition Action Officer Ms. Ermelinda C. Ascarez shared her inspirational message, and one student shared as her response that thru participating the NSOA she was able to learn good nutrition and the benefits of breastfeeding, which she can also share to her family members, friends and in the community.

At the end of the event the participants were able to receive certificate of completion for participating in the NSOA modules. They were also able to receive NSOA bag, NNC mug, 10-Kumainment fan, NSOA t-shirt and they were able to claim their cellular phone load for those students who texted the correct answer during the quiz conducted every after episode. 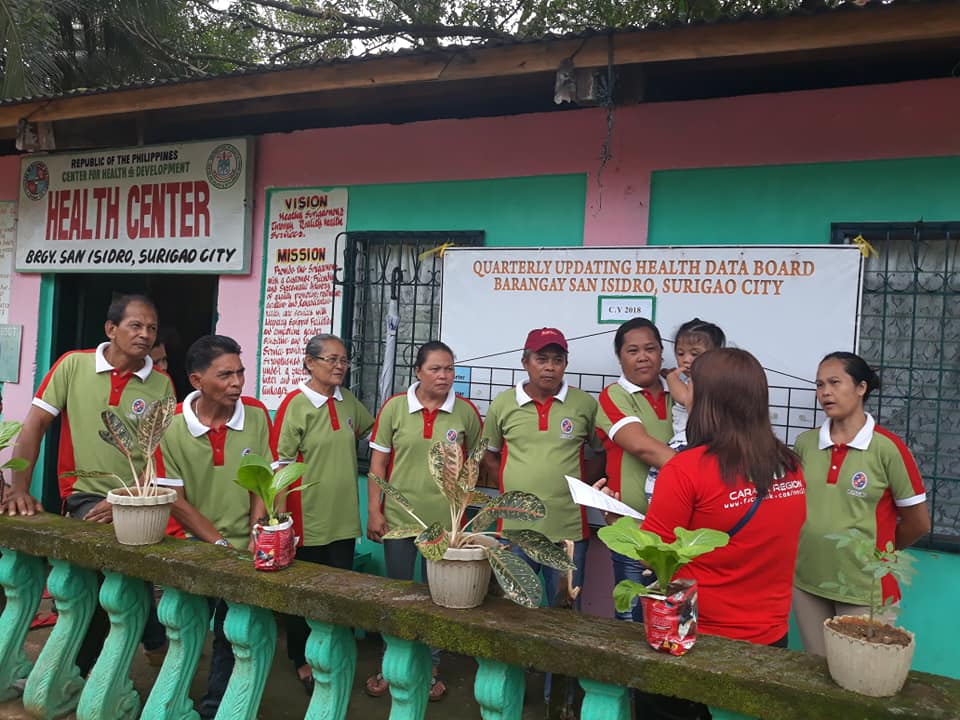 May 2-3, 2018- NNC Caraga conducted the Regional Outstanding Barangay Nutrition Scholar Evaluation ROBNS evaluation in the local government of Agusan del Norte and Surigao City last May 2-3, 2018. This evaluation is conducted annually to measure the performance of the BNS and recognize those with exemplary performance in the delivery of basic nutrition and nutrition-related services in her barangay. The mechanics of the evaluation shall consist of desk review of Barangay Nutrition Documents, assessment in the performance and accomplishment reports of the BNS and validation of 0-59 months nutritional status through weighing of children.

In the local government of Agusan del Norte the BNS contender was Miraflor C. Calacat from Barangay Mahayahay, Kitcharao, Agusan del Norte. Initial findings were noted during the evaluation. Tools in determining then nutritional status such as weighing scale, nutrition forms, growth charts and CGS tables were available and properly filed. The nutrition-related projects initiated are as follows: Nutrition Education: Family Development Session, ICFP- Integrated Community Food Production and Communal garden were implemented. Tilapia Fish and Carpa Raisings and Peanut Production were among the livelihood programs implemented. The documents were also properly filed, updated and documented.

In the local government of Surigao City, the ROBNS contender was Reygie U. Luayon from barangay San Isidro. The RNET commended the presence of their barangay nutrition committee as well as the livelihood programs implemented in their barangay such as Culture of Lobsters, Bigasan for Women’s organization (SLP), Fisherfolk and seafoods production. 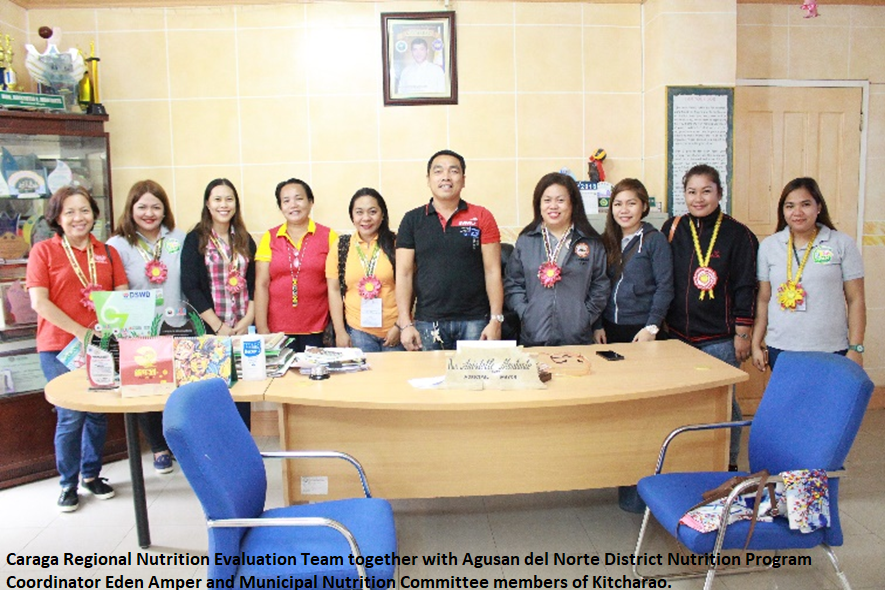 Monitoring and Evaluation on Local Level Plan Implementation (MELLPI) aims to determine the extent to which nutrition is integrated into local development plans and programs, institute corrective measures and facilitate achievement of the plan’s objective as part on the Philippine Plan of Action for Nutrition (PPAN) and advocate for the continuing support for local nutrition programs and determine the changes in the nutritional status of 0-59 months children through weighing of at least 10% of 0-59 months old preschool children in selected barangays. The RNET conducted desk review and interview with the Local Nutrition Committee to assess their nutrition program implementation. Barangay 2, Amontay and Barangay 6 were visited in the Municipality of Nasipit while on the other hand, Barangay Poblacion and Crossing were visited in the municipality of Kitcharao. 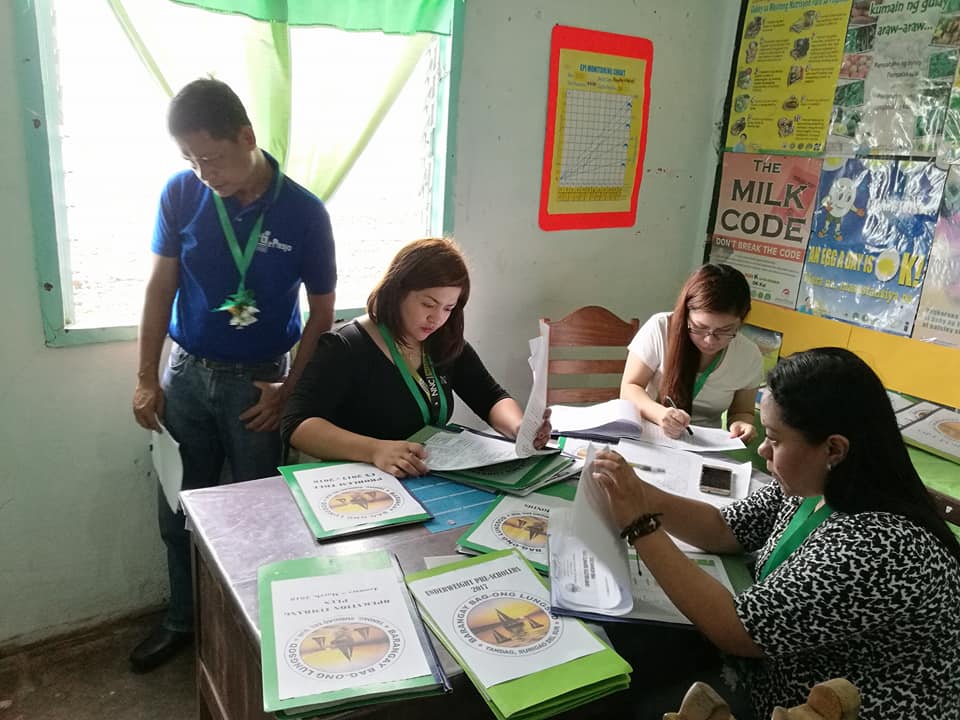 The annual search for Regional Outstanding Barangay Nutrition Scholar (ROBNS) for the evaluation period Calendar Year 2017 is conducted by National Nutrition Council- Caraga together with the Regional Nutrition Evaluation Team (RNET) headed by Ms. Melinda Lagua from DILG. The first wave of the Regional Outstanding Barangay Nutrition Scholar (ROBNS) evaluation started on April 4, 2018.It aims to measure the performance of the BNS and recognize those with exemplary performance in the delivery of basic nutrition and nutrition-related services in her barangay which contributed to the improvement of the nutritional status of its constituents.

The mechanics of the evaluation shall consist of desk review of Barangay Nutrition Documents and validation of 0-59 months nutritional status through weighing of children to determine the changes in their weight that leads to the improvement of their nutritional status specifically of underweight children. The RNET is also looking forward for the assessment of skills of BNS in coordinating the Barangay Nutrition Program to various sectors at the grassroots level, efficiency in the delivery of nutrition services, initiatives in resource generation activities, innovativeness, nutrition assessment, maintenance of updated records and timeliness of submission of nutrition reports, among others. Monitoring and Evaluation on Local Level Plan Implementation (MELLPI) was also conducted to assess the efficiency and effectiveness in the management of nutrition programs anchored on the Philippine Plan of Action for Nutrition (PPAN) 2017-2022. Feedbacking was held to advocate for the support on the nutrition program and PPAN among the members of the barangay nutrition committee. The RNET had already visited the OBNS contenders from Talacogon Agusan del Sur, Baan Km3, Butuan City, Bayugan City, Barangay Zone-II Lanuza, Surigao del Sur and Bangong-Lungsod Tandag City. OBNS from Agusan del Norte, Surigao del Norte, Province of Dinagat Island and Cabadbaran City are still to be evaluated. They will also undergo a written examination in Butuan City through a prescribed BNS questionnaire from NNC-Central Office which will be administered by the evaluators.