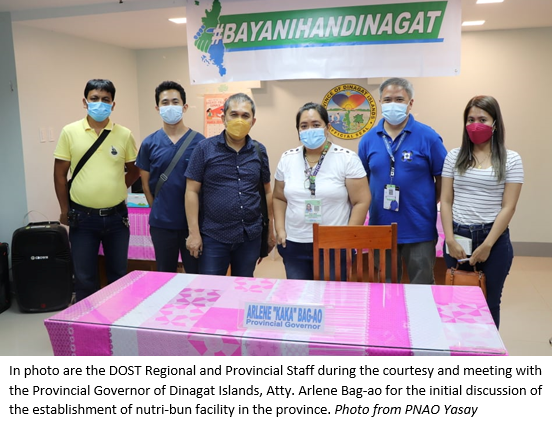 San Jose -- Nutribun, a bread product produced to supply and combat malnutrition in the Philippines, is now to help augment the supply for the children in the Province of Dinagat Islands. This was announced on March 28, 2022, by the Department of Science of Technology (DOST) Caraga region with its goal to help access a supply of available bread in the typhoon-Odette ravaged areas of the region.

Nutribun was developed to tailor-fit and augment local ingredients such as Moringa leaf powder (malanga), squash, banana powder, and eggs. The enhanced Nutri-bun which was launched by the DOST FNRI in June 2021 has a softer texture, weighing 160-165 grams per piece, has 504 calories, 17.8 grams of protein, and 6.08 milligrams of iron, and 244 micrograms of vitamin A.

The comeback of Nutribun is one of the DOST-FNRI’s answers to the call of the Department of Social Welfare and Development’s (DSWD) Memorandum Circular No. 12 Series of 2020, or the Guidelines for the Implementation of the Supplementary Feeding Program During Community Quarantine or Other Similar Emergencies. To establish a facility, the DOST FNRI will do the technology and knowledge transfer to the Province of Dinagat Island.

Municipality of Santiago orients on NPM 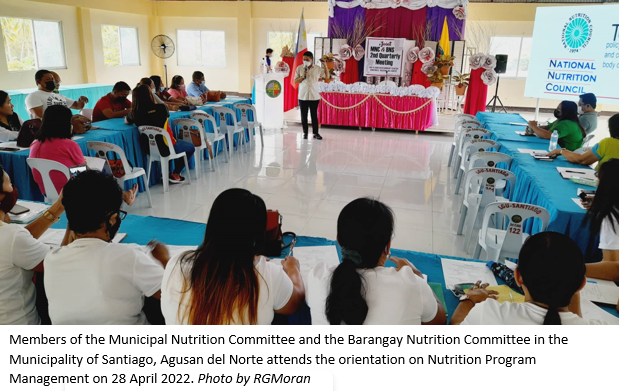 Butuan City- In order to increase awareness and gain support, the National Nutrition Council Caraga was invited to provide an orientation on Nutrition Program Management (NPM) in the Municipality of Santiago, Agusan del Norte on 28 April 2022.

The orientation started with the discussion and assessment of the Local Nutrition Committee functionality delivered by NNC- OIC Dr. Nino Archie S. Labordo.

Department of the Interior and Local Government (DILG) Memorandum 2018-42 or the “Adoption and Implementation of the Philippine Plan of Action for Nutrition (PPAN) 2017-2022” which provides guidance on the programs, projects and activities that can be implemented in the local government unit was shared to provide guidance in the monitoring of the local nutrition Committee functionality.

The highlighted topic was on “Why Invest in Nutrition?” delivered by Dr. Labordo, provided a better appreciation of the different forms of malnutrition during the pandemic and other conditions, which helped local government unit decide to invest more on doable and localized nutrition interventions. 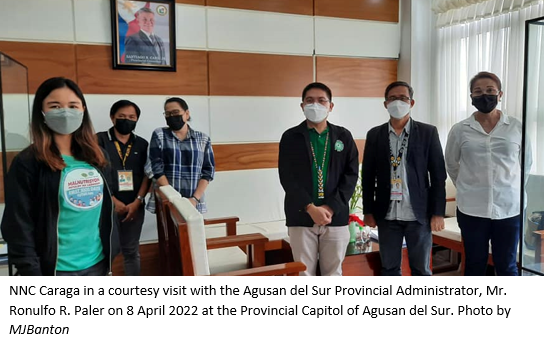 OIC-RNPC Labordo extended his gratitude to the Provincial Government of Agusan del Sur (PGAS) for its continued support of nutrition program implementation, especially on the Dietary Supplementation Program – Tutok Kainan (DSP-TK) that will be implemented to 13 Local Government Units (LGUs) of this province with children ages 6-23 months old as its beneficiaries.

Provincial Nutrition Action Officer Laniebelle Angchangco shared the current nutrition situation, emphasizing the stunting prevalence of the province that made the province one of the beneficiaries of DSP-TK. She also added that media platforms help nutrition advocates to increase the awareness of the people on nutrition and nutrition programs. 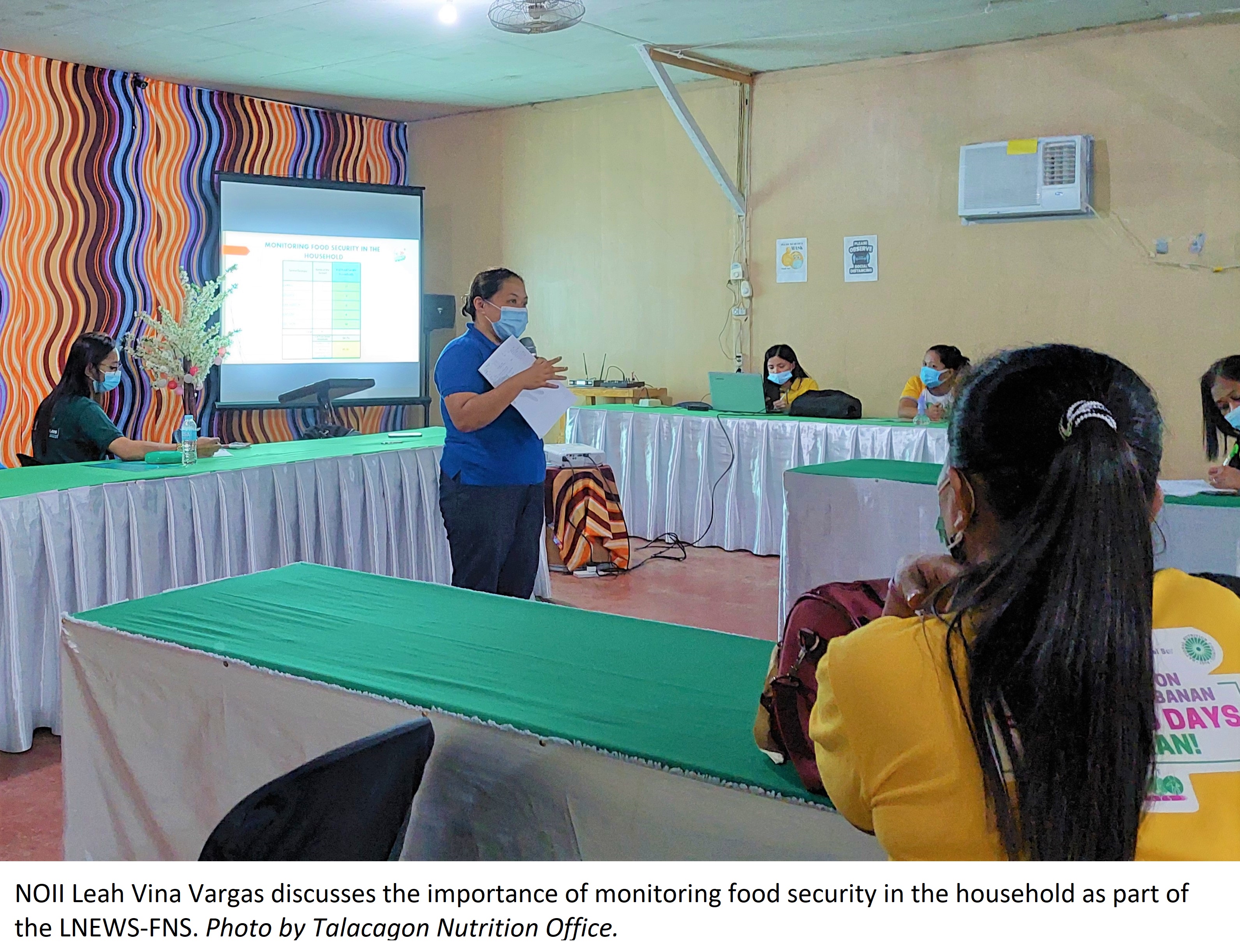 NNC Caraga conducted the First Semester Monitoring Meeting on the Local Nutrition Early Warning System for Food and Nutrition Security (LNEWS-FNS) in the Municipality of Talacogon, on April 27, 2022, at Cabatana Farm, Talacogon, Agusan Del Sur to determine the status of food security in the area and status of project implementation and identify good practices and gaps on nutrition program management and implementation.

The Municipal Nutrition Committee and the 5 sentinel barangays are the audience of the said meeting. Ms. Marylou Astilo served as lead on behalf of MNAO Jowee Ann Jusay and presented the results of the data collected in the 5 sentinel barangays and other secondary data from the municipal level. Ms. Astilo reported that the data gathered reflects a low prevalence of malnutrition in the municipality and below the national prevalence for the 3 indices (underweight, wasting and stunting).

Ms. Astilo also reported that the Household Dietary Diversity Score (HDDS) is at 8.5. HDDS is a simple count of food groups that a household has consumed over the last 24 hours and shows a household's ability to access varieties of foods. On the other hand, half of the randomly selected households were food insecure, and price increases in the basic food commodities were observed.  Causes were identified and price increases were tackled. The top food group consumed includes rice and cereals, vegetables, and condiments, while the least consumed are fruits, meat and nuts and legumes. 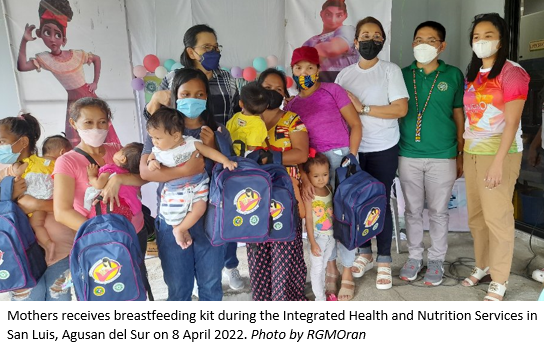 On the nutrition advocacy, OIC-RNPC Niño Archie S. Labordo and PNAO Laniebelle Angchangco conducted nutrition education to mothers through games and pop quiz. The pop quiz was about the first 1000 days, exclusive breastfeeding and complementary feeding. Those mothers who have participated received kits. Pregnancy kits are given to soon-to-be mothers and breastfeeding kits for lactating mothers. On the other hand, a physical activity, in the form of dancing, was done with the children of the Municipality of San Luis and was discussed on the importance physical activity and healthy eating.

NNC Caraga joins in the advocacy of the World Malaria Day 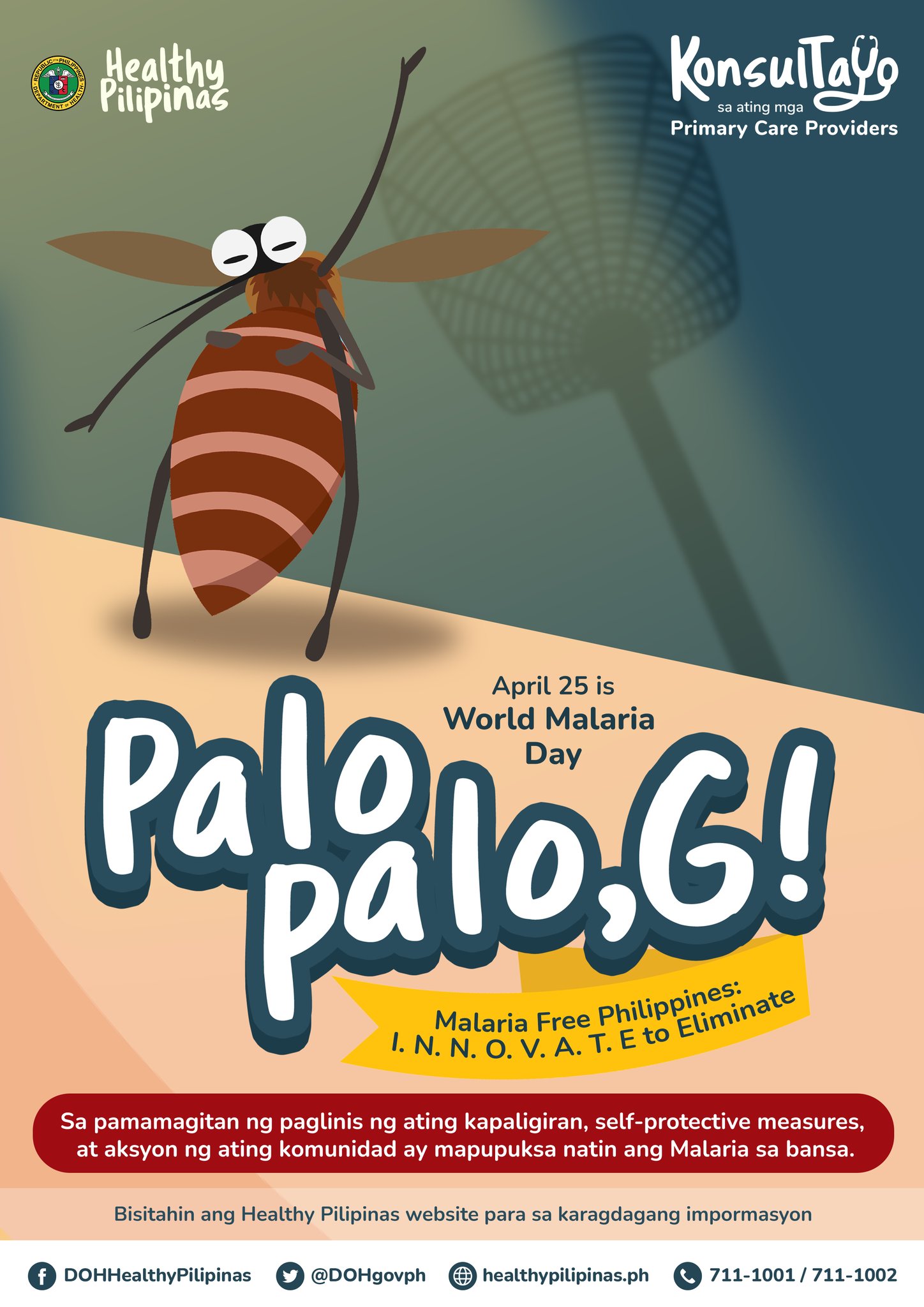 In observance, the Department of Health commemorates annually every 25th of April and recognizes global efforts in controlling malaria.  Its grails to keep malaria high on the political agenda, mobilize additional resources, and empower communities.

World Malaria Day was conceived from Africa Malaria Day in 2008, which has been observed since 2001 by African governments. The observance served as a time to assess progress toward goals aimed at controlling malaria and diminishing its mortality in African countries.  And later promoted to discern the presence of malaria in countries worldwide and to bring greater awareness to the global fight against the disease.

According to the global malaria report, the Western Pacific Region had an estimated 1.7 million cases in 2019 with a 52% reduction in the number of deaths for decades. The Philippines has also remarkably decreased the incidence of malaria by 87% from 48,569 in 2003 to 6,120 cases in 2020 and has also reported a 98% reduction in mortality due to malaria. Malaria has been reported to be the third-largest killer of children between the ages of 1 month up to 5 years old, following pneumonia and diarrhea.

Malaria is blood-borne, endo-parasitic(protozoan)infection. It is usually transmitted through the bite of a specific malaria-carrying mosquito which portal entry and exit in the skin and the target is the blood.

The symptoms usually start approximately 9 to 14 days after the bite of an infective mosquito. However, in some types of malaria, the symptoms may appear one to several months after the infective mosquito bite. The symptoms include high fever, headache, chills, shivers, nausea, and vomiting but it may worsen to generalized convulsion, severe vomiting and diarrhea, delirium and impaired consciousness, followed by coma and possibly death.

Read more: NNC Caraga joins in the advocacy of the World Malaria Day