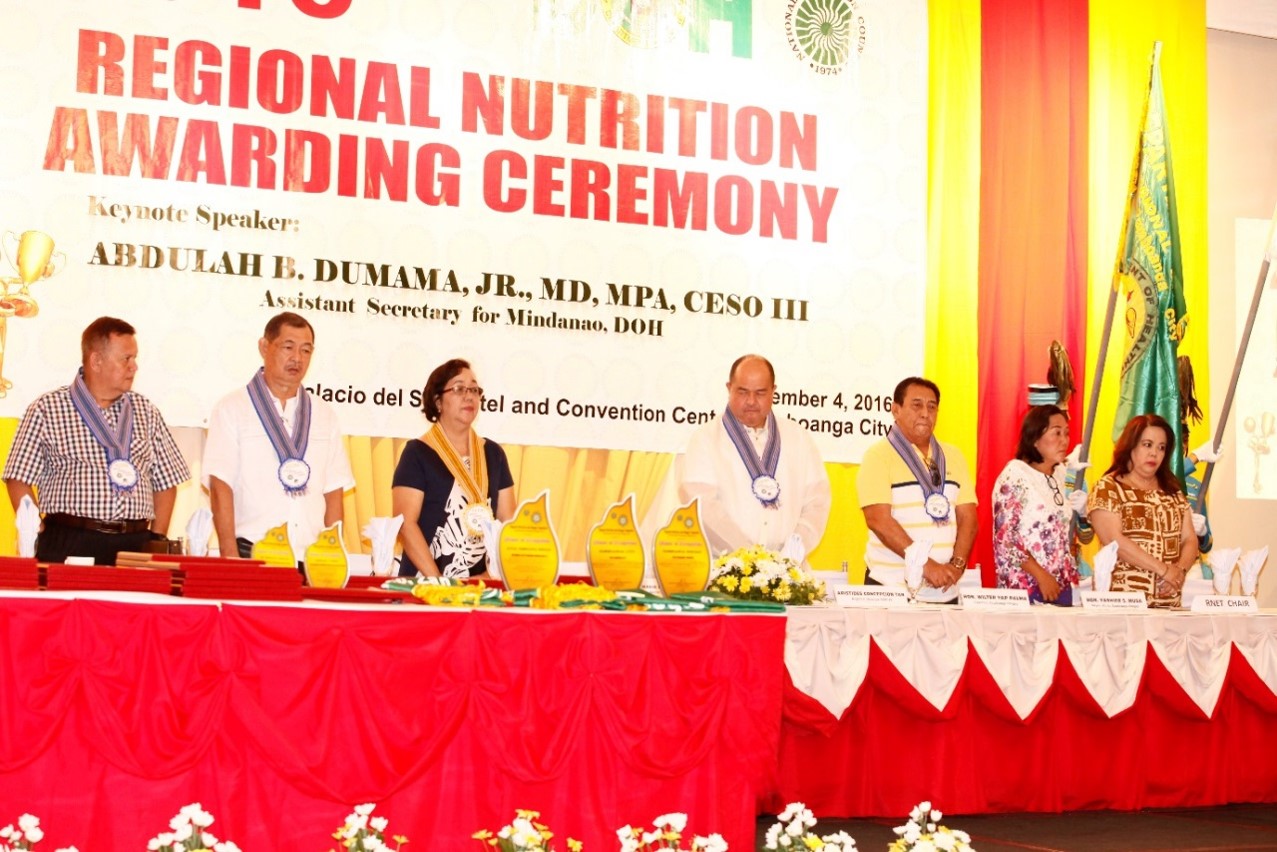 On 04 November 2016 in Palacio Del Sur Convention Center, the Regional Nutrition Anti-Hunger Committee under the leadership of the Department of Health Regional Director Dr. Aristides C. Tan and in coordination with the National Nutrition Council held the annual ceremonial conferment to outstanding LGUs nutrition implementers in Zamboanga Peninsula with the Department of Health Assistant Secretary for Mindanao, Dr. Abdullah B. Dumama, Jr. as keynote speaker. This affair is being conducted every year to give due recognitions to individuals who have contributed significantly in the successful implementation of various nutrition programs, projects and activities in their respective localities. Key personalities from the health and nutrition agencies, social welfare, trade and industry, education, agriculture, local government units and academe were in attendance along with the presence of the stars of the event – the awardees – among them were the Local Chief Executives and members of their Local nutrition Committees, Nutrition Action Officers, the Barangay Nutrition Scholars, NGOs and media partners.

The Provincial and City Outstanding Barangay Nutrition Scholars were also recognized for their exemplary performance in the delivery of nutrition services and nutrition sensitive activities and initiatives in their communities. The support of the NNC’s Nutriskwela Community Radio in the promotion of good nutrition was also given recognition. These are Nutriskwela community radio: Radyo Kasuhnan Siay, Zamboanga Sibugay, Radyo Komunidad, Isabela City, Basilan; Radyo Kaugmaran, Aujrora, Zamboanga del Sur; and Radyo Kahupayan, Siayan, Zamboanga del Norte.  The members of the Regional Nutrition Evaluation Team lead by Ms. Greta Martinez of the Department of Social Welfare and Development were likewise aptly recognized for support and commitment to the nutrition.

The awards provided much pride and sense of fulfillment to the awardees who in their responses committed to continue to support the program because more than the award their primary goal is to provide better nutrition and health to their constituents.

May the Regional Nutrition Awarding Ceremony continue to serve as an incentive for the Local Nutrition Committees to fully manage a quality nutrition program in their localities and improve the quality of life in the region through good nutrition.