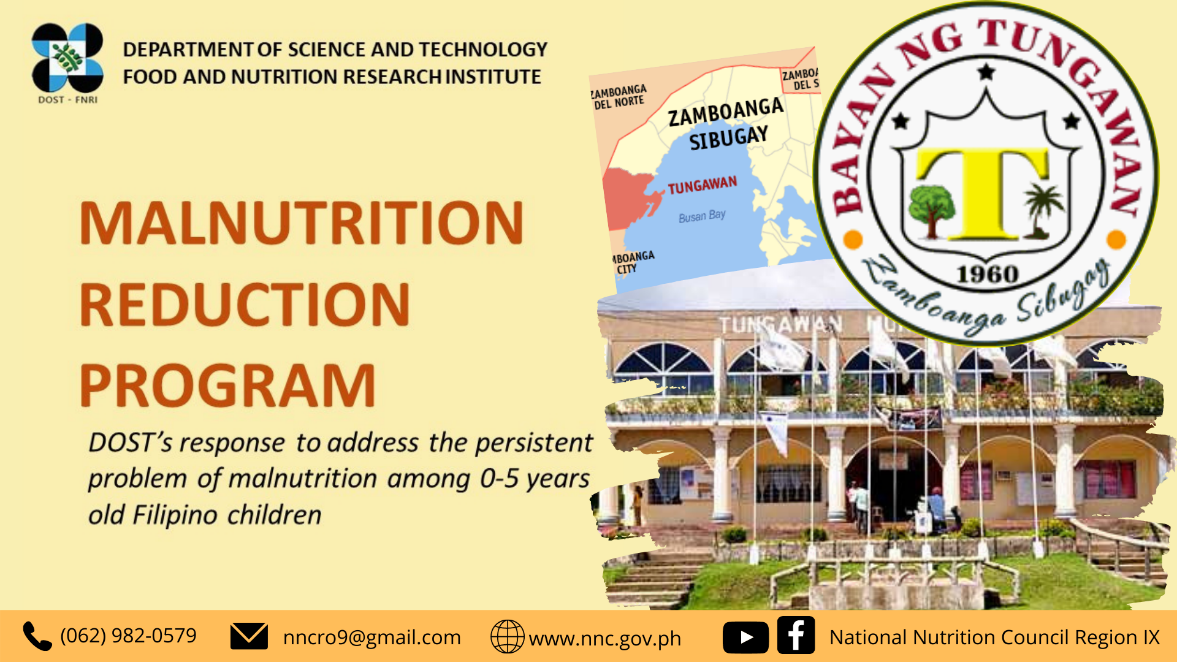 The Department of Science and Technology Food and Nutrition Research Institute (DOST-FNRI) launched its Malnutrition Reduction Program (MRP) in 2011. The MRP is DOST’s response to address the persistent problem of malnutrition among Filipino infants and young children. The program uses a mix of intervention on local technology, supplementary feeding, and nutrition education. One of the interventions include the DOST PINOY (Package for the Improvement of Nutrition Of Young Children) which uses feeding of FNRI-developed, local based complementary foods made of rice, mongo, and sesame, rich in protein ang energy among six months to below three years old children and nutrition education of their mothers and caregivers.

The Municipality of Tungawan in the Province of Zamboanga Sibugay is a beneficiary of the setting up of DOST’s assisted Complementary Food Production Facility. The program started in their locality on 2 December 2014 when DOST-FNRI conducted a DOST PINOY advocacy among Municipal Nutrition Committee (MNC) members and thereafter, a two-day training-workshop on nutrition modules and cooking demonstration was held on 13-14 January 2015. In line with this, the LGU of Tungawan adopted the largescale complementary food production and its facility was inaugurated on 13 May 2015.

To further implement its program, the province of Zamboanga Sibugay passed an ordinance requesting all LGU to support and allocate funds for the adoption and implementation of the DOST PINOY in their respective territorial jurisdiction. In its locality, LGU Tungawan also passed a resolution supporting the DOST PINOY in the area. It was noted that the complementary food production of the municipality become well-known even to the neighboring municipalities and provinces in the region.

DOST-FNRI was happy to note during the monitoring visit done that the LGU and its community health workers were determined to implement the program and there were also numerous support and cooperation from the mothers and children. It was also noted that after the intervention, 73.22% or 216 participants had normal weights.

The DOST-FNRI will continue monitoring the implementation of MRP in the Municipality of Tungawan. The LGU showed that with the collaborative efforts of the LGU, health and nutrition workers, and the community, the problem of malnutrition will be addressed.