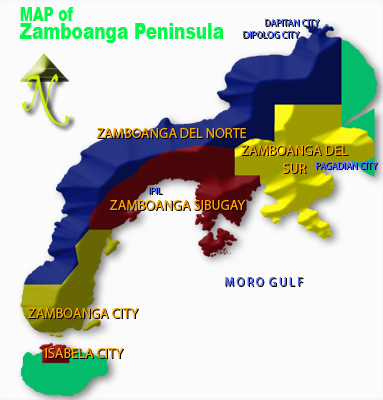 The Zamboanga Peninsula was previously known as Western Mindanao before the enactment of Executive No. (E.O. 36) on September 19, 2001.

In 2001, Zamboanga Sibugay, was created from the province of Zamboanga del Sur with Ipil as the seat of government.

Isabela City, Basilan is actually part of the island-province of Basilan to the south of the peninsula, and is that province’s capital. In the same year when Zamboanga Sibugay was created, the residents of Basilan opted to join the Autonomous Region in Muslim Mindanao (ARMM) in a recent plebiscite. However, the citizens of Isabela City did not want to join the ARMM and so the city was made a part of the Zamboanga Peninsula region with the enactment of E.O. 36 (the same E.O. that renamed the region).

Zamboanga Peninsula lies between the Moro Gulf, part of the Celebes Sea, and the Sulu Sea. Along the shores of the peninsula are numerous bays and islands. Its territory consists of the three Zamboanga provinces and Zamboanga City, as well as the Northern Mindanao province of Misamis Occidental. The peninsula is connected to the main part of Mindanao through an isthmus situated between Panguil Bay and Pagadian Bay. The boundary between the peninsula and the mainland is artificially marked by the border between the provinces of Zamboanga del Sur and Lanao del Norte. 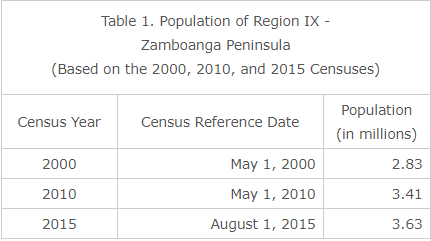 Zamboanga Peninsula has the first export-processing zone in Mindanao. Farming and fishing are the main economic activities of the region. It also has rice and corn mills, oil processing, coffee berry processing and processing of latex from rubber. Its home industries include rattan and furniture craft, basket making, weaving and brass work.

In Zamboanga Peninsula, about 1/3 of the region’s population is composed of ethnic people. These groups, usually erroneously classified under the general heading of Muslims, are actually distinct from each other in culture. They are generally divided into the Tausugs, Yakans, Badjaos, Samals and the Subanons of Zamboanga del Norte, Zamboanga del Sur, and Zamboanga Sibugay.

The most dominant religion in the city is Christianity with 73% of the population adhering to the faith. The majority of Christians are Roman Catholics with minorities of Protestants, Iglesia Ni Cristo, and Jesus Miracle Circle. The remaining 27% belongs to other non-Christian faith such as Islam and Buddhism.

Zamboanga Peninsula is rich in culture. The languages spoken around the region is Chavacano*, Cebuano (Bisaya), Tagalog, Maranao, and Subanen.

*it is a Spanish-based creole language. It is a combination of vocabulary mainly from Spanish, with grammar mainly from Tagalog and Cebuano. 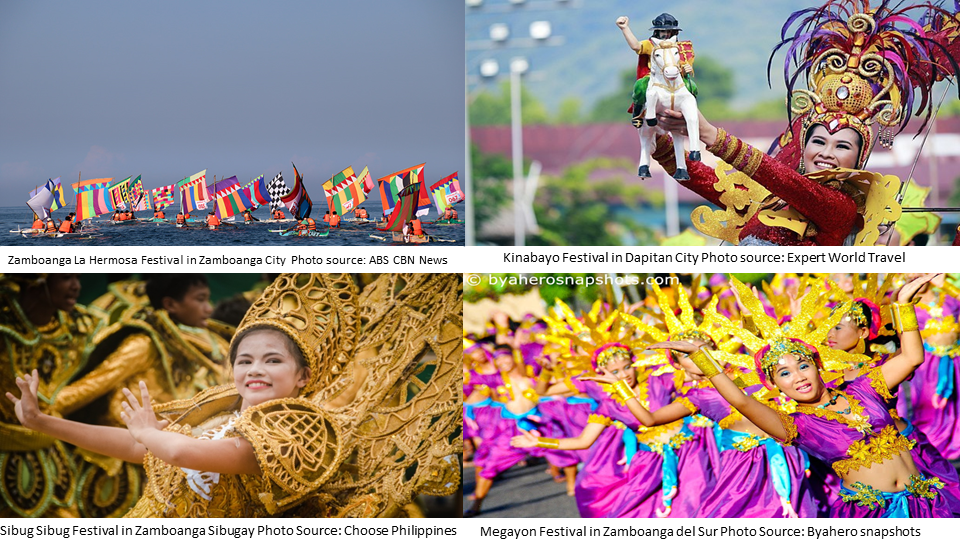 Zamboanga Peninsula has numerous festivals where the localities and tourist can celebrate and enjoy. One of which is the Sibug Sibug Festival in Zamboanga Sibugay to commemorate the founding of the province and to give thanks to their patron. The highlight of the feast is the “Talaba Longest Grill”. It is also famous because of the juiciest, meatiest, and most delicious taste of Sibugay oysters.

Every July 24, the City of Dapitan celebrates the Kinabayo festival. It is held to celebrate the Patron Saint, St. James the Greater. At the core of the festival is the reenactment of the Spanish-Moorish wars, the Battle of Clavijo, previously known as the Battle of Covadonga in 722 AD.

Popularly known as Fiesta Pilar, Zamboanga City celebrates the Zamboanga La Hermosa Festival. It is a month-long festival to pay tribute to the Patron Nuestra Señora del Pilar. The highly anticipated activity is the Regatta de Zamboanga, a fluvial race of vintas or native sea boats.

The Megayon Festival in Zamboanga del Sur is relatively new as it only started in 2001. Megayon means “unity”. The festival is a week-long gathering to celebrate the unity among the three settlers that contribute to the founding of the province: the Subanons, the Muslims, and the local settlers.

Zamboanga del Norte's main crops are coconut, corn, palay, banana, cassava, rubber and vegetables. Its known mineral deposits are gold, chromite, manganese, asbestos and silica. Fishing and farming are the primary economic activities. Leading industries include coconut production as well as rice, corn and banana production. The region is the third highest in fish production in the country. 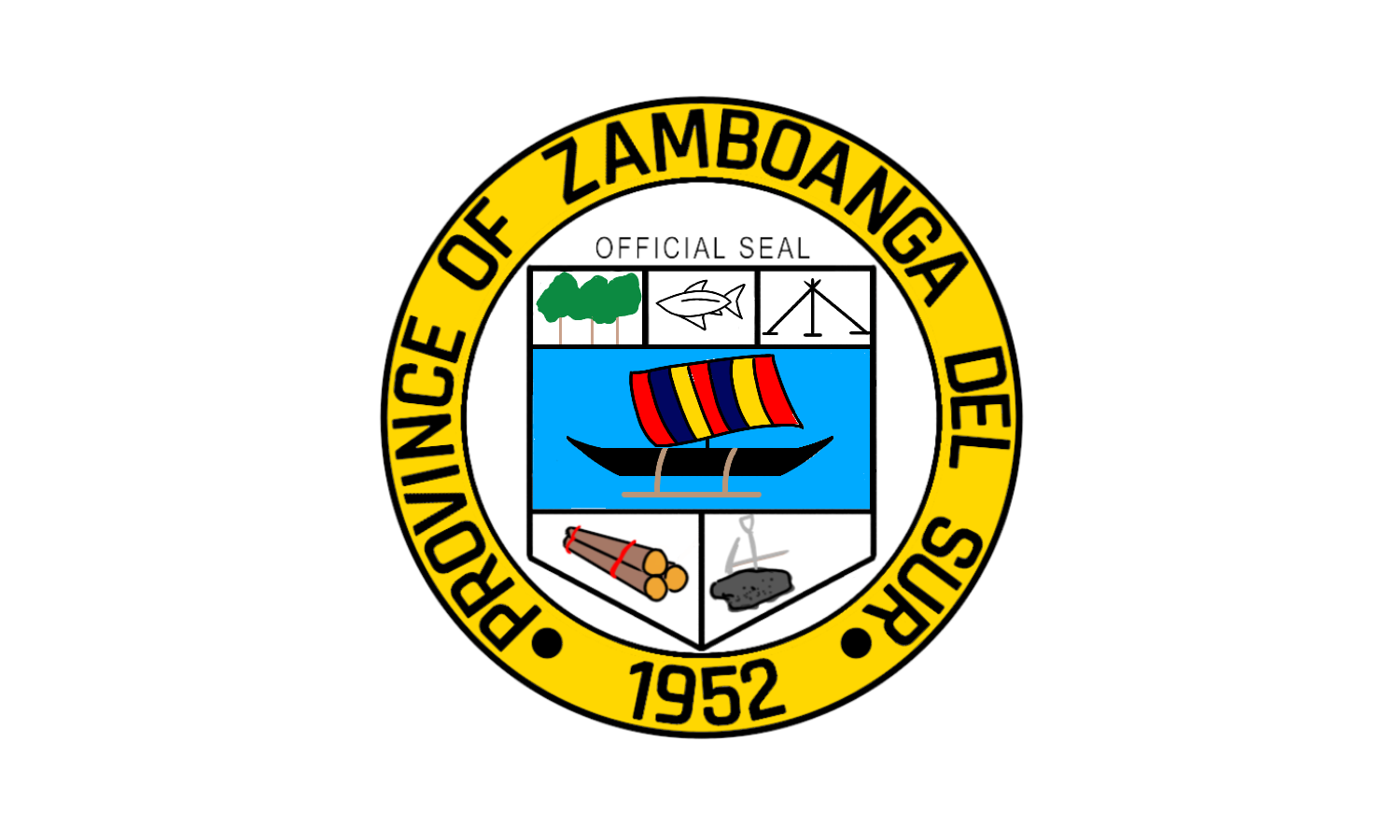 Zamboanga del Sur is located northwest of the great island of Mindanao. Its capital, Pagadian City, is also the region’s capital. The province was originally the other half of another province, called simply Zamboanga. When the government passed Republic Act 711 on September 17, 1952, it officially became Zamboanga Del Sur while the northern part became the Zamboanga del Norte. In 2001, the third district of the province decided to split off, forming Zamboanga Sibugay.

Zamboanga Del Sur is also considered as one of the best sources of crustaceans in the Philippines. The crabs and lobsters it produces are always in demand in other places. 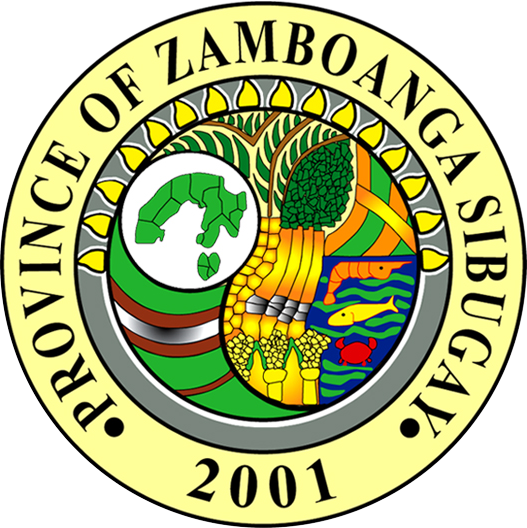 Zamboanga Sibugay is considered as the 4th youngest province in the Philippines. The province was carved out from the third congressional district of Zamboanga del Sur after a plebiscite in 2011. Its capital is Ipil and it borders Zamboanga del Norte to the north, Zamboanga del Sur to the east and Zamboanga City to the southwest. To the south lies Sibuguey Bay in the Moro Gulf. 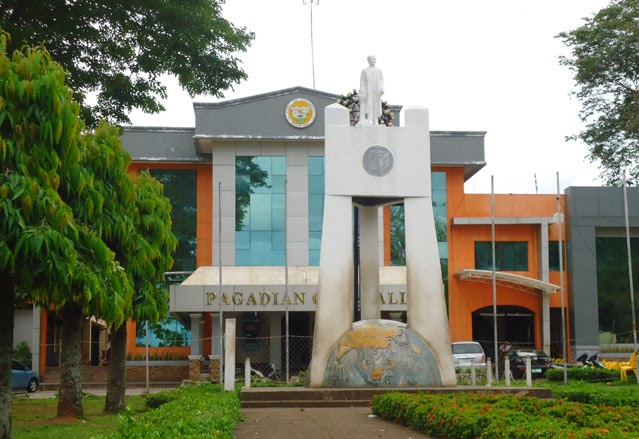 Pagadian City is called the “Little Hong Kong of the South” because of its rolling terrain, reminiscent of the former Crown colony. About 45% of it is steeply sloping terrain of hills and mountains on the northwestern portion that covers an estimated 15,090 hectares. Pagadian City became the capital of Zamboanga Del Sur on June 21, 1969 by virtue of R.A. 5478 and became a chartered city. In 2004, it became the Regional Center for the Philippines’ Region IX – Zamboanga Peninsula 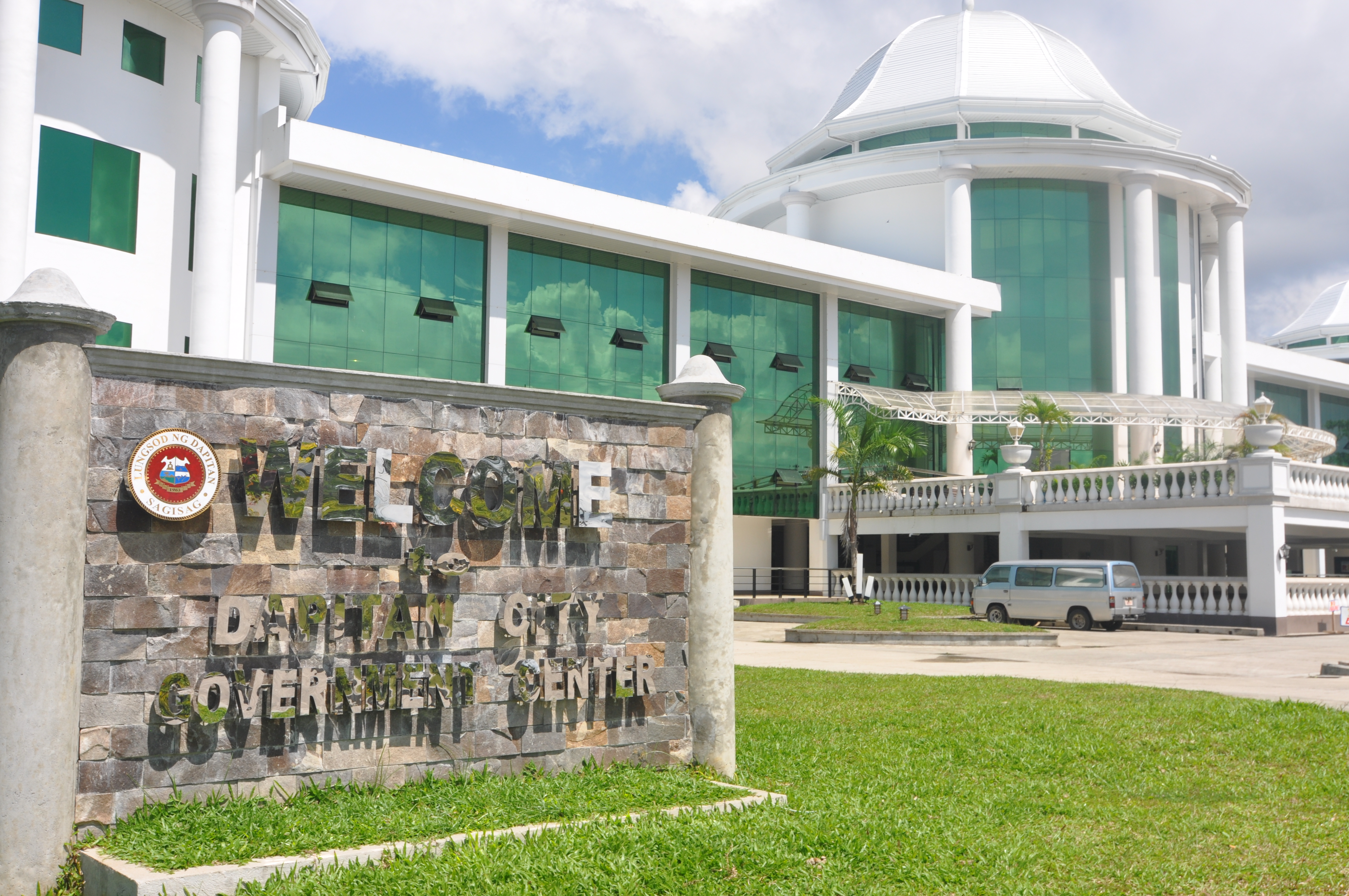 Dapitan City is called the “Shrine City of the Philippines”. From a small town replete with history, Dapitan took a giant step forward and became a chartered city by virtue of R.A. 3811 enacted on June 22, 1963, thus becoming the first city in the Province of Zamboanga del Norte. It lies on the Northern tip of Zamboanga del Norte and northwestern coast of the island of Mindanao.

Dapitan’s main economic activities are fishing (round scad, sardines, bonito, and anchovy) and agriculture. Copra is the most important commercial agricultural product. 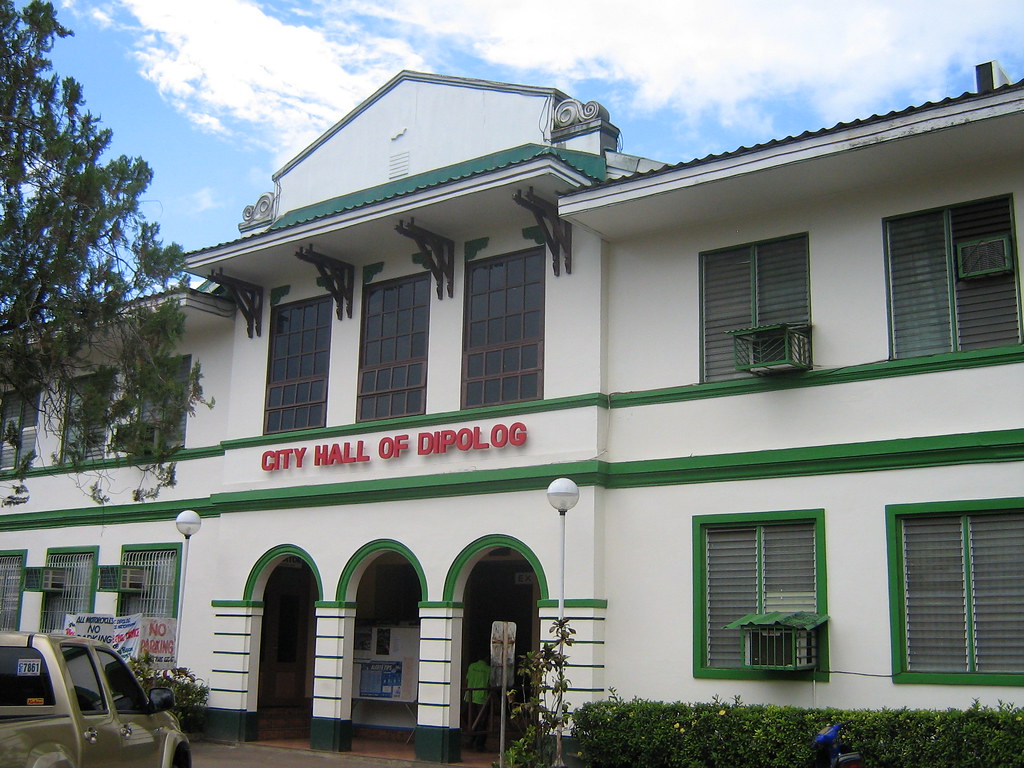 Dipolog City is known as the “Gateway to Western Mindanao and Zamboanga Peninsula”. It is the capital of the Province of Zamboanga del Norte and it is situated in the northwestern part of the province. It is facing Cebu and Negros provinces and sits of the tip of Western Mindanao.

Dipolog is basically an agricultural city. A few of its large agro-industrial establishments deal includes rice and corn, fish, livestock and processing plants. A great majority of the small manufacturing establishments are also agro-industrial such as saw mills, bakeries as well as small and medium scale cottage industry. Major products are coconut, rice, corn, fish, and sardines in oil. Major source of livelihood are construction, fishing, agriculture and services. Isabela City is a component city and capital of the province of Basilan. The city is located on the northern shore of Basilan. Across the Basilan Strait to the north is Zamboanga City. By virtue of R.A. 9023, the then Municipality of Isabela, Basilan was converted into a component city to be known as City of Isabela on April 25, 2001. It continued to be under the jurisdiction of Basilan for the administration of provincially-developed services and functions. But for the administration of regional services, the city is part of the Zamboanga Peninsula Region despite the rest of Basilan being under the authority of the ARMM. 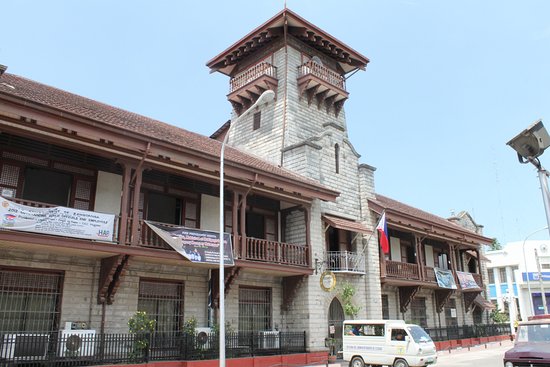 Zamboanga City is known as the “Asia’s Latin City” due to its Hispanic influences in its culture and religion, manifested in the Spanish-styled historic buildings and structures, and language spoken. It is considered as the 6th most populous and 3rd largest city by land area in the Philippines. The city is considered as the commercial and industrial center of the Zamboanga Peninsula. It became a chartered city on October 12, 1936 under Commonwealth Act No. 39. It was inaugurated on February 26, 1937. Zamboanga City is an independent, chartered city and was designated highly urbanized on November 22, 1983.

Zamboanga is noted as the Sardines Capital of the Philippines because 8 out of 11 sardines companies in the country are operating in the city. The canning factories are converged in the west coast of Zamboanga. Sardine fishing and processing account for about 70 percent of the city’s economy.