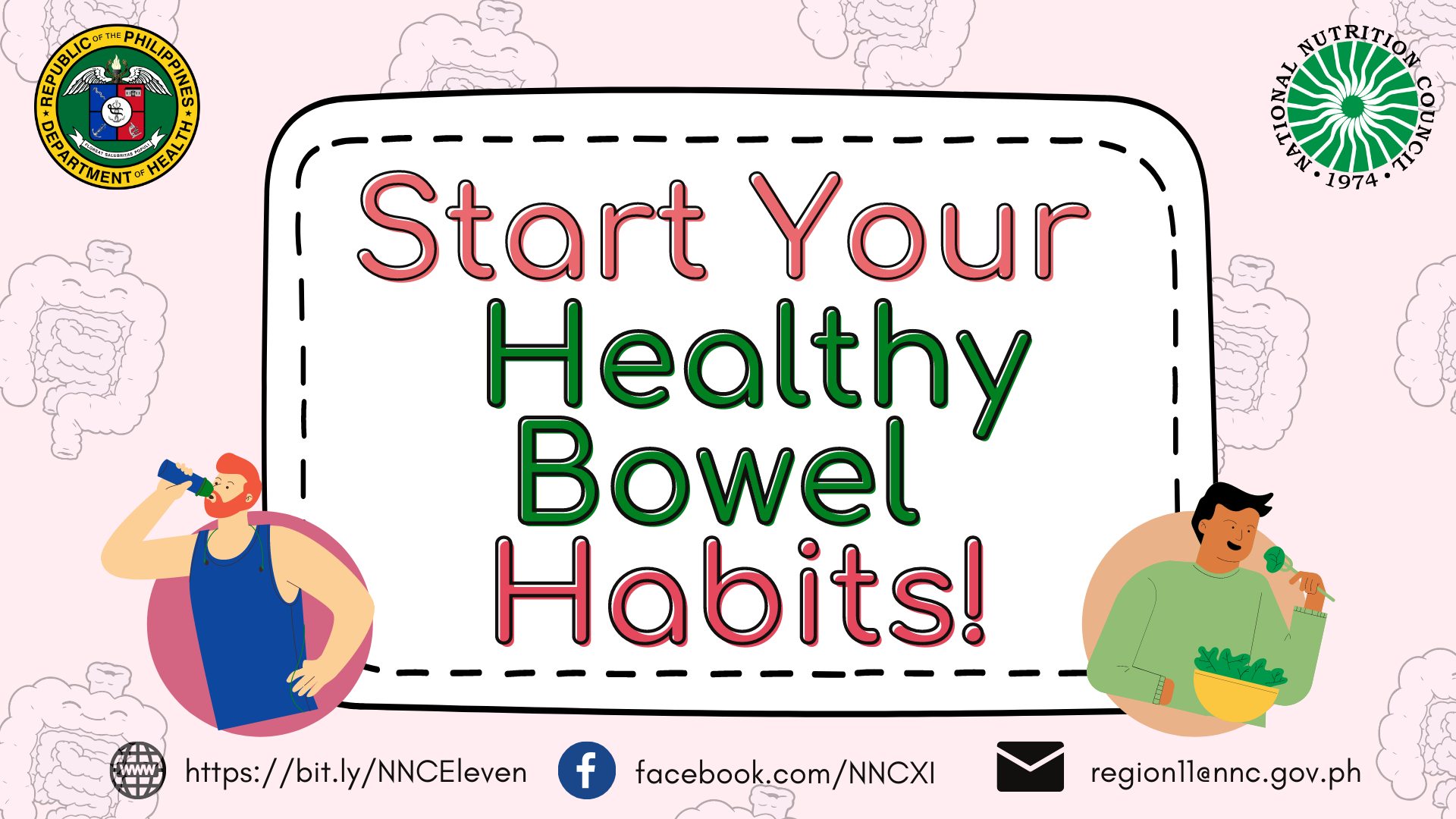 Your colon is part of the exquisite organs comprising the digestive system. It acts as a pipe that helps absorb water, electrolytes, and other essential nutrients. Other than waste elimination, it plays a fundamental role in providing vitamins like Vitamin K, and B vitamins that are conducive to the cultivation of gut microbiota.  Hence, a healthy bowel is deemed essential not just in the efficient functioning of the digestive system but in overall health.

Colorectal cancer (CRC) is considered the third most common diagnosis hence the second deadliest malignancy in a population of both men and women. However, the Colon Cancer Foundation estimated that lifestyle changes can prevent 50% to 75% of colon-related conditions. Many reports link colorectal cancer risk to diet, weight, and exercise. Here are the habits that you can start to help your bowel health:

Food on my Plate: Peanuts 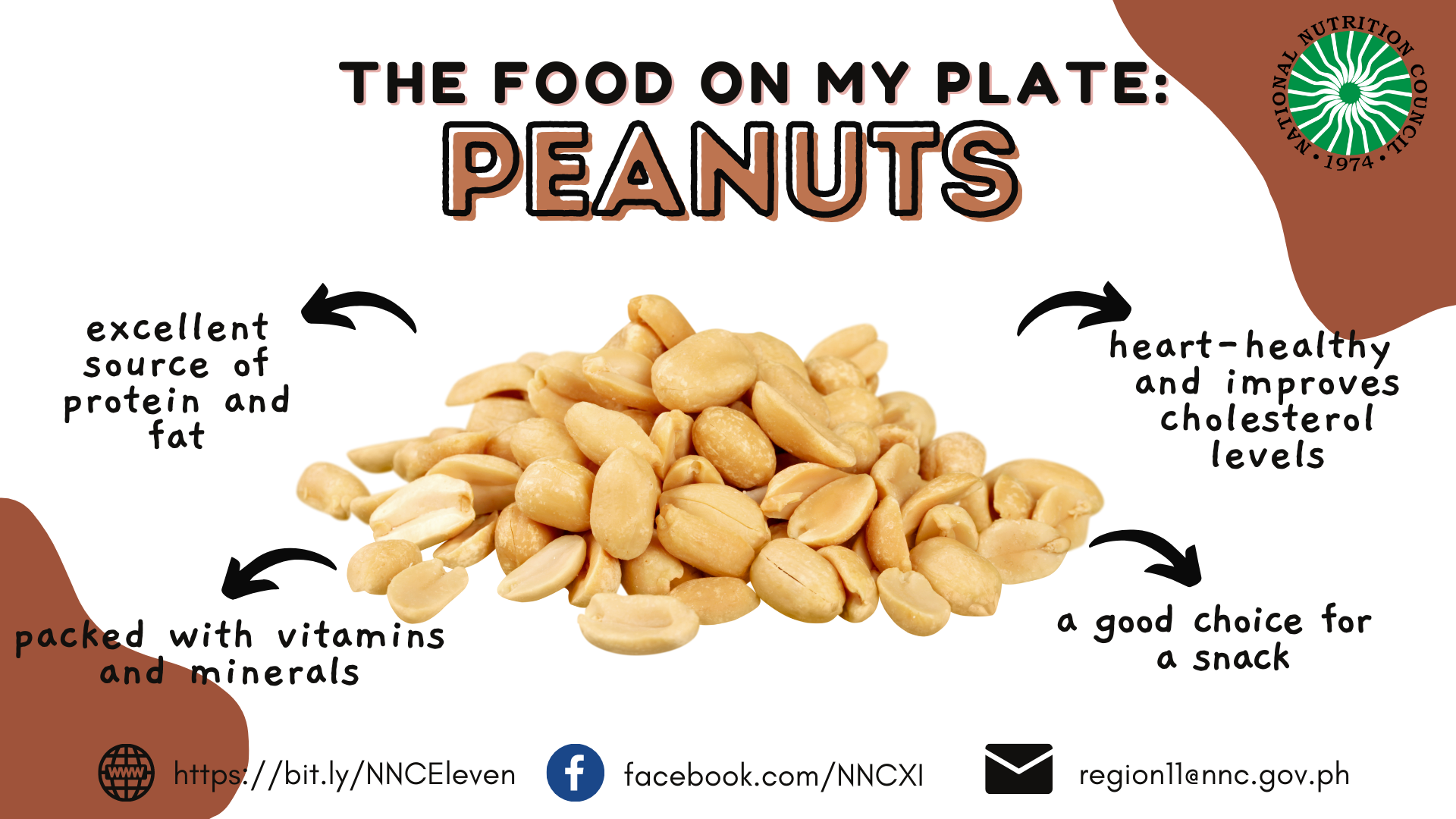 Did you know that peanuts are not a true nut but a legume? It comes from a plant in the pea family and grows underground on a vine instead of on a tree. Peanuts are native to the Western Hemisphere and were theorized to have originated in South America and then spread as Spanish explorers brought peanuts with them then later, traders brought peanuts to Asia and Africa. Since then, peanuts are grown for making peanut oil, roasted and salted peanuts, peanut butter, and confections.

Peanuts are good sources of carbohydrates, dietary fiber, protein, calcium, iron, magnesium, potassium, niacin, Vitamin B6, and Vitamin E. It also contains significant amounts of thiamin, riboflavin, pantothenic acid, folate, selenium, choline, manganese, copper, phosphorus, and zinc. Since peanuts are plant-based foods, they are cholesterol-free despite their high-fat content.  Among regularly consumed nuts such as almonds and cashews, peanuts have the greatest protein content of around 26 %. It also contains high amounts of arginine (12.5%), which has been directly linked to various cardiovascular health benefits. However, since peanuts contain vegetable protein, it is still considered incomplete or lacking adequate levels of at least one of the essential amino acids necessary for human nutrition such as methionine, lysine, and threonine. This can be complemented by pairing it with other plants high in these amino acids such as carrots, pumpkin seeds, chia seeds, avocado, wheat germ, cinnamon, spinach, and quinoa. 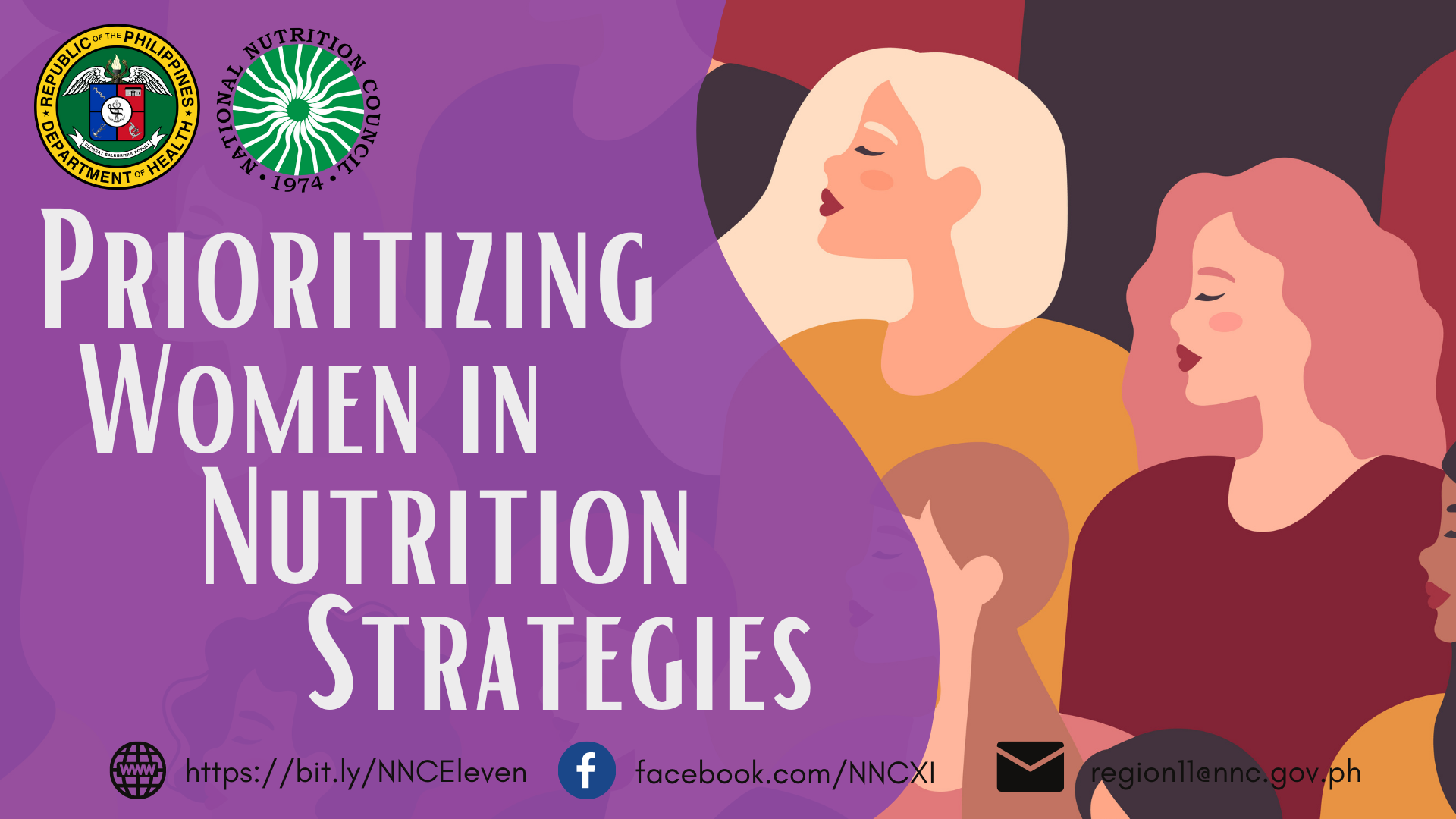 This March, as we celebrate National Women’s Month, we highlight the important role of women as initiators of change. The celebration focuses on the theme “WE Make CHANGE Work for Women” and the subtheme “Agenda ng Kababaihan, Tungo sa Kaunlaran.”. To support this goal, we have several nutrition programs and strategies which prioritize women from high-risk groups such as Adolescents, Pregnant and Lactating mothers, and several health programs for women of all ages. The following are examples of laws that prioritize women in nutrition strategies:

It's Berry Good for You! 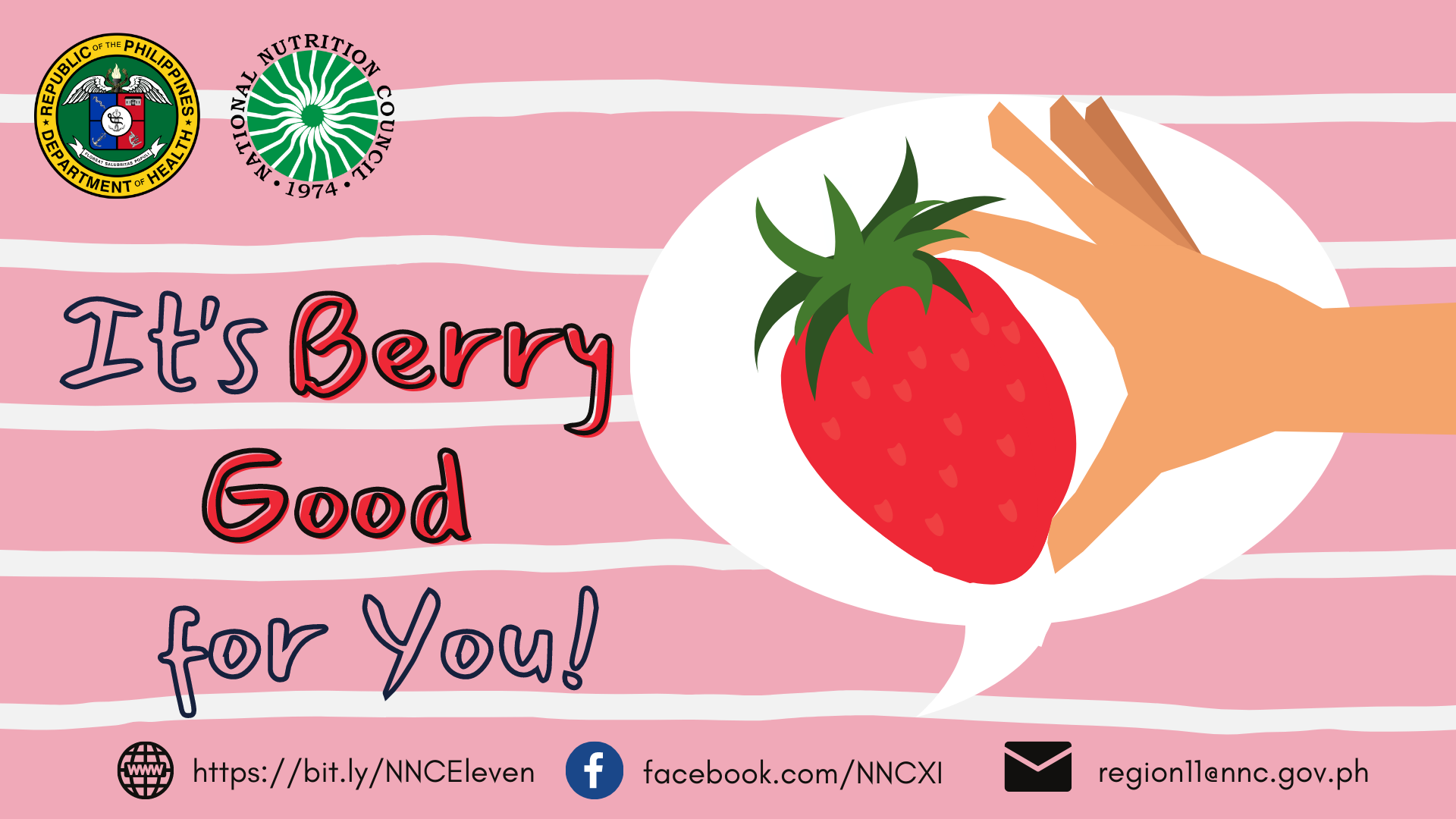 Bursting with antioxidants, vitamins, minerals, and fiber- Berries are dubbed as one of the “healthiest food” that a person should eat. Though not all are commercially available, popular varieties of berries are blackberries, blueberries, raspberries, and strawberries. These fruit gems are highly perishable and often expensive, yet due to its deliciously sweet flavor and impressive health benefits, one could not resist to have a taste.

Regardless of the variety, berries of all kinds are great options to be included in the diet. They are known as top sources of vitamins, minerals, and disease-fighting nutrients. Let’s unleash the different health benefits these fruits have to offer and know why it is berry good for you:

Read more: It's Berry Good for You! 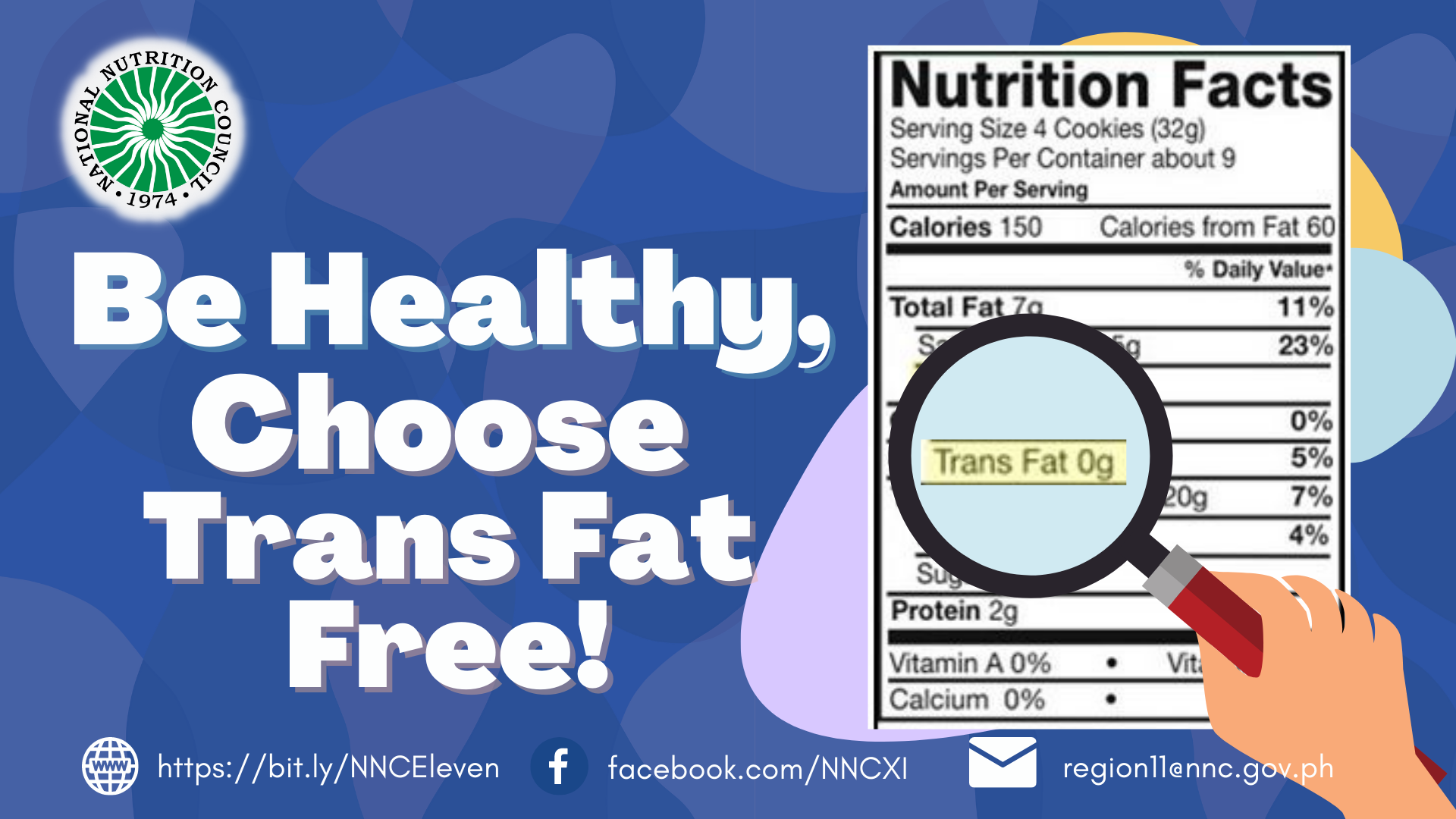 Did you know that excessive long-term intake of Trans fat from foods may increase your risk of developing heart disease? In the Philippines, Cardiovascular disease or CVD including Heart Attack and Stroke is the number one cause of death and known comorbidity of COVID-19. In 2020, about half of Filipinos who died from COVID also suffered comorbidities which include Coronary Heart Disease (CHD) which is a kind of CVD. One of the risk factors that contribute to the development of these diseases is an unhealthy diet and lifestyle such as excessive intake of salty foods and foods with Trans Fat and lack of physical activity.

Trans Fats are chemically modified fats from vegetable oils that are transformed into semi-solid fats or partially hydrogenated and hydrogenated fats to increase their shelf life when added to food products such as baked goods, pastries, and other processed foods. They can also be found naturally occurring in some animal products such as meat, cheese, butter, and dairy products. In a 2015 Meta-analysis, total trans-fat intake is associated with an increased risk of mortality from Coronary Heart Disease by 28 - 50%. In the same study, they also noted that industrial sources of trans fat from processed foods are associated with a significantly increased risk of mortality from coronary heart disease by 4 - 33% as compared to trans fats from natural food sources.

The Food on my Plate: Potato 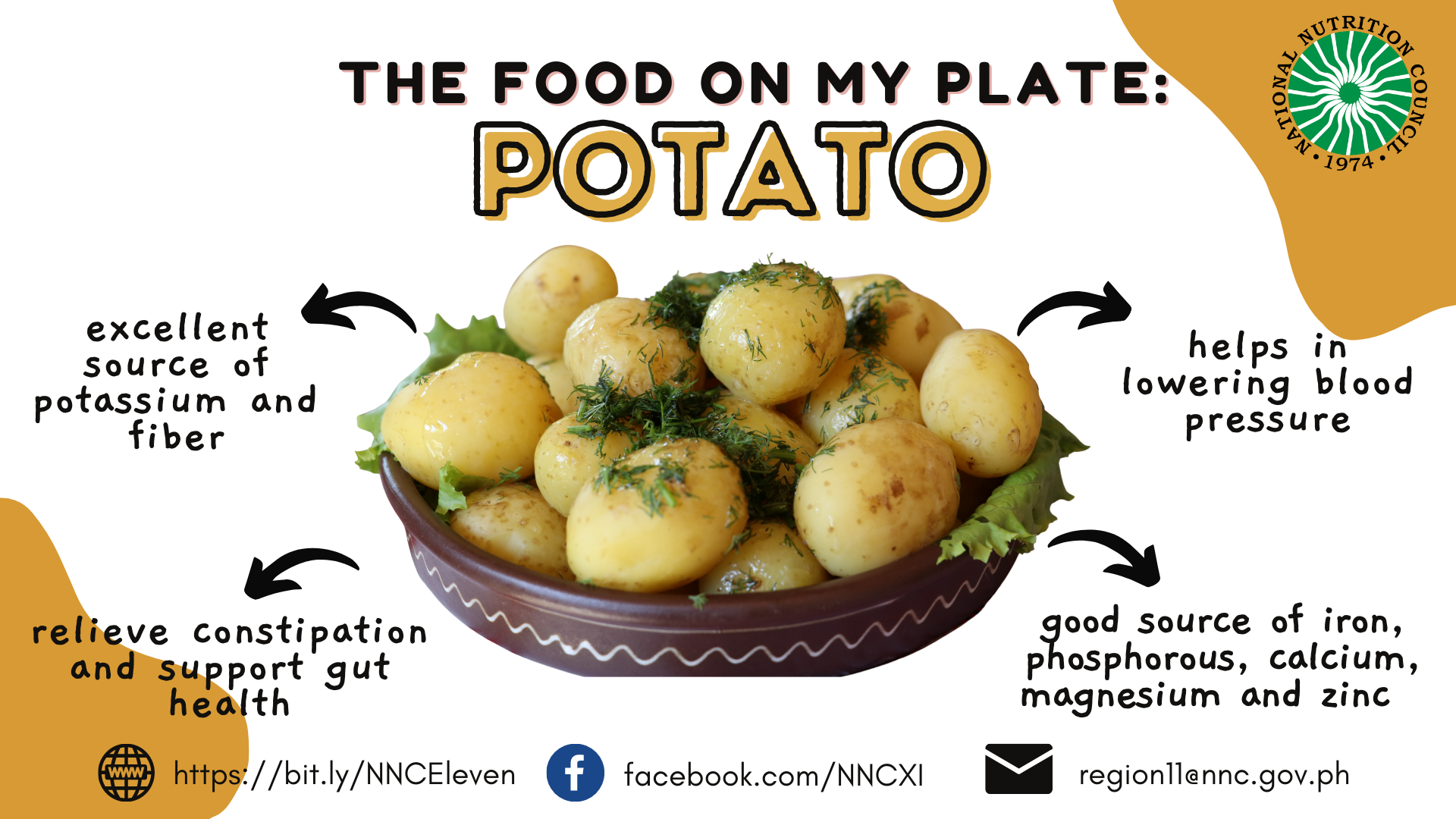 Hailed as a “nutritional giant and the friend of peasants, rulers, and sages”- Potato has become a staple food for different cultures all over the world. The word "potato" comes from the Spanish "patata."  It is considered the fifth most important crop worldwide, next to wheat, corn, rice, and sugar cane. Potatoes are edible tubers belonging to the nightshade family that is available worldwide and all year long. They are relatively cheap to grow since it demands less cultivation, rich in nutrients and makes an incredibly delicious treat.

10,000 years ago, potatoes were first domesticated in Andes, South America. Later on, Spanish explorers introduced them to Europe in the early 16th century and then continued to set off to its startling popularity across the world paving the way for potato frenzy. Let’s get to know some of the surprising health and nutrition benefits that make it a healthy diet staple:

Read more: The Food on my Plate: Potato