Region XII at a Glance 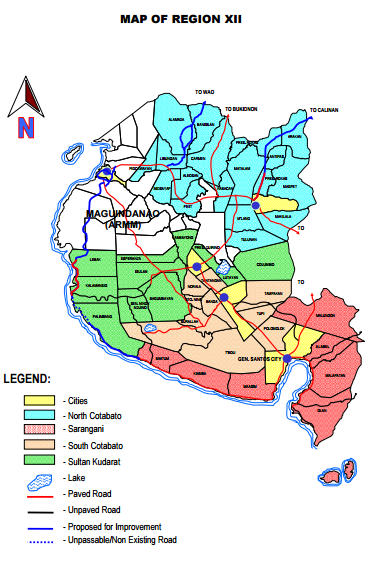 The most significant development in the political history of Mindanao was the organization of six politico-military districts in the island in 1860.  The central district embracing Cotabato included Polloc, Illana Bay as far as the western coast of Zamboanga at point Murcielagos and the southern extremity of Mindanao down to point Glan.  The capital of the government was Cotabato City until 1872 when the city was destroyed by a strong earthquake, after which the capital was moved to Zamboanga City.

Central Mindanao Region (Region XII) was created on July 7, 1975 through Presidential Decree No. 742.  The region was composed of the provinces of Cotabato, Sultan Kudarat, Lanao del Norte, Lanao del Sur and Maguindanao and the cities of Iligan, Cotabato and Marawi.  The extent of regionalization was further seen in the establishment of Autonomous Regions in Central and Western Mindanao (Regions XII and IX) by virtue of Presidential Decree No. 1618.

On August 1, 1989, Republic Act No. 6734 was signed into law, which provided for the creation of the Autonomous Region in Muslim Mindanao (ARMM), the composition of which included Lanao del Sur and Maguindanao provinces. The former Regional Autonomous Government of Central Mindanao was therefore reverted to an administrative region. Executive Order 429 was issued on October 12, 1990 defining the new composition of Central Mindanao with Koronadal City as its Regional Administrative Center. However, a restraining order was issued by the Supreme Court and the said EO was not implemented. Thus, the composition of Region XII prior to the issuance of EO 429 (i.e., Cotabato Province, Sultan Kudarat, Lanao del Norte, Cotabato City, Iligan City and Marawi City) was maintained and Cotabato City remained as Regional Administrative Center of Region XII. The latter had likewise been designated as the temporary regional center of the ARMM per RA 6734.

Pursuant to the provisions of the Final Peace Agreement signed between the Government of the Republic of the Philippines and the Moro National Liberation Front (MNLF) on September 2, 1996, Executive Order No. 371 was issued by His Excellency Fidel V. Ramos on October 2, 1996. EO 371 established a Special Zone of Peace and Development (SZOPAD) in Southern Philippines, which encompassed five regions, including Region XII.

On August 14, 2001, a plebiscite was conducted in the SZOPAD to determine the areas that shall comprise the expanded ARMM, pursuant to RA 9054.  Marawi City in Region XII and Basilan Province in Region IX joined the ARMM.  As a resultant administrative measure following the reconfiguration of ARMM, President Gloria Macapagal Arroyo issued Executive Order No. 36 on September 19, 2001, which realigned the administrative regions in Mindanao.  The province of Lanao del Norte and Iligan City of the old Region XII were transferred to Region X. The provinces of South Cotabato, Saranggani, and the cities of Koronadal and Gen. Santos of Region XI became part of the new Region XII.  Thus, the new composition of Region XII per EO 36 now includes the provinces of Sarangani, South Cotabato, Sultan Kudarat and Cotabato, and the cities of Kidapawan, Tacurong, Koronadal, Cotabato and General Santos.

Region XII is situated in the central and southwestern parts of Mindanao, bounded on the north by the provinces of Lanao del Sur and Bukidnon;  on the northwest, by Maguindanao;  on the southwest, by Mindanao Sea; and on the east, by Davao del Sur and Davao City.  It lies 6o 32’ to 7 o 33’ of the north latitude and 124 o 01’ to 125 o 17’ of the east longitude.