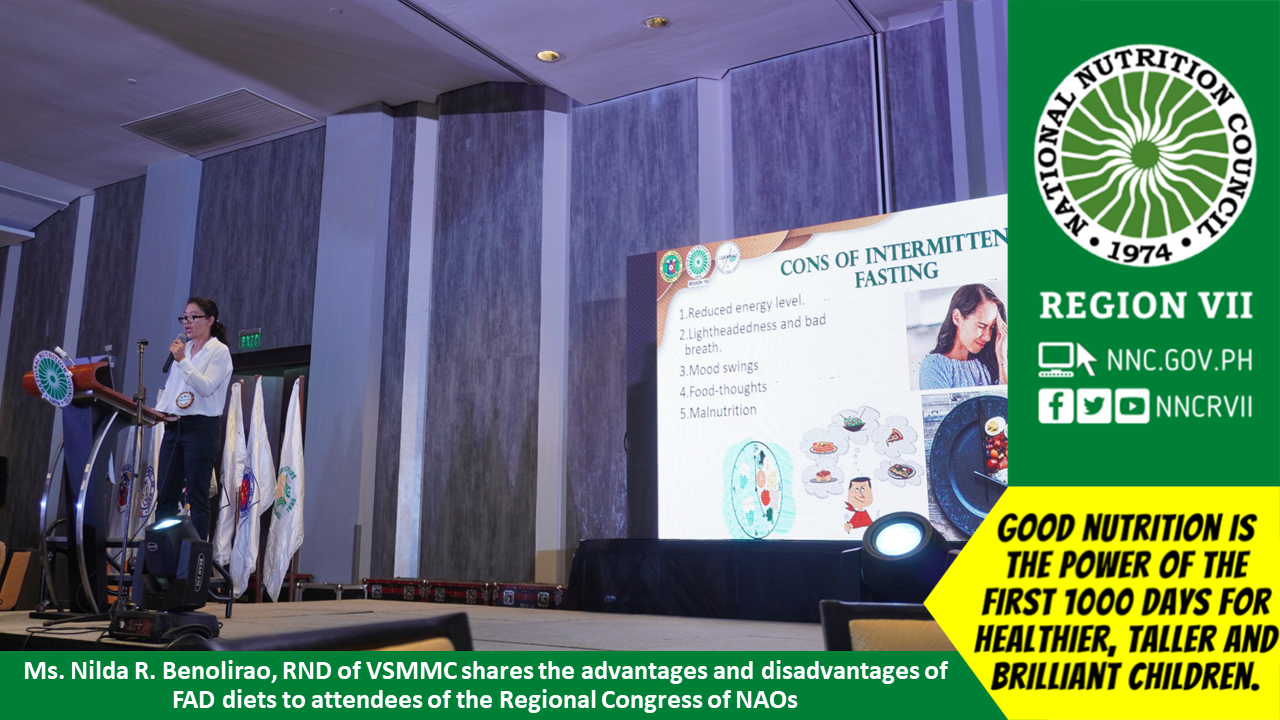 In her lecture titled “Fad Diets, Challenge Nutrition Goals for the New Normal”, she shared that around 800 million people in the world are living with obesity while in the Philippines, almost 27 million Filipinos are overweight and obese. Considering the causes of obesity are complex that goes far beyond diet and physical activity, some factors to be considered like environmental, genetic & medical conditions like thyroid problem, a problem during menstruation, individuals taking medications for diabetes, antipsychotic drugs, anti-depressant, emotional problems, poor sleep, and stress that eventually will lead to non-communicable diseases such as type 2 diabetes mellitus, cardiovascular diseases, and many others. According to her, as a consequence of the effect of peer pressure and the effect of media on body image and self-esteem, people are more susceptible to adopting various fad diets that claim to aid in losing weight fast.

Her discussion focused on identifying fad diets, gaining knowledge on the advantages and disadvantages of fad diets, and creating goals for the prevention of overweight and obesity.

She further revealed that fad diets are a popular trendy dietary pattern that is known to be a quick fix for obesity. Fad diets can be differentiated from a healthy and balanced diet based on their characteristics such as (1) promises rapid weight loss, (2) absence of physical activity guidelines, (3) promoting short-term changes rather than achieving lifelong sustainable goals, (4) focuses on one type of food or eliminates any food group.

Ms. Benolirao also explained that one thing in common is the maintenance issues – once the diet is stopped, the lost weight is regained quickly, and nutritional adequacy is questionable. Reports also showed that people who undergo fad dieting fail to provide health warnings for those with chronic diseases and there is also a lack of scientific evidence to support the claims of fad diets have positive outcomes in health.

During her presentation attended by 127 NAOs regionwide, she highlighted the National Nutrition Council (NNC) policy statement on FAD Diets “Fad diets are not recommended for weight loss as it may pose potential health risks and dangers. Instead, the NNC recommends adherence to a holistic, sustainable, adequate, and nutritionally balanced diet, complemented by an active lifestyle and lifelong behavioral modifications. It is also the position of the NNC that individual efforts to address overweight and obesity must be complemented with population-based interventions, particularly on the promotion of healthier food environments and food systems and public awareness through behavior-change communications, to prevent further increase in overweight and obesity prevalence in the country.”

In closing, the nutrition expert stated that in order to lose weight effectively and healthily; one must set SMART goals. One must set goals relevant and meaningful to you. and seek help for a health professional. Pick goals and seat deadlines and allow setbacks- it’s a natural part of behavior change.