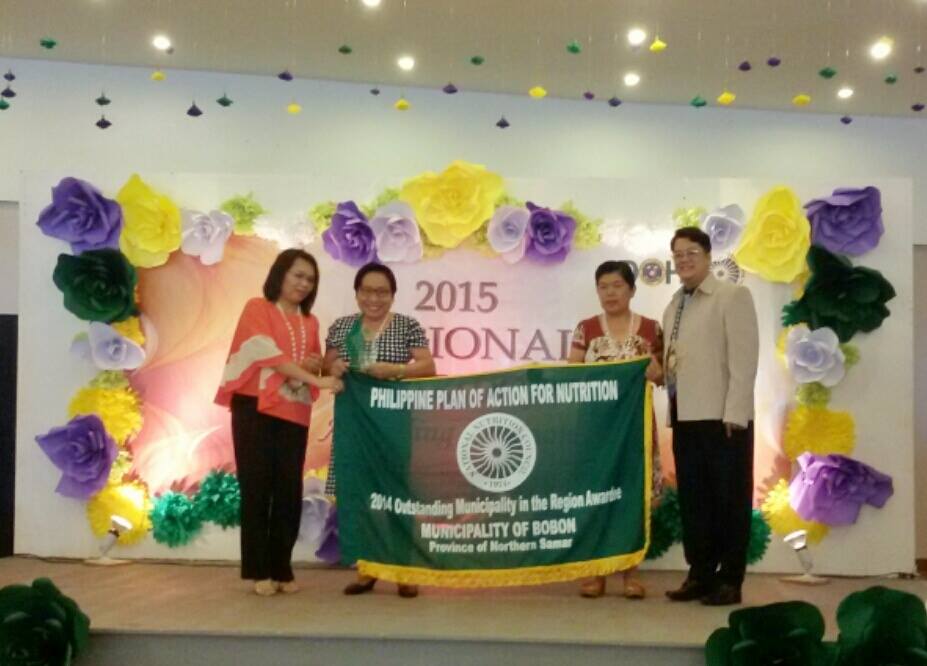 TACLOBAN CITY, Nov. 27 (PNA) - The National Nutrition Council (NNC) has recognized on Friday some local government units and individuals that contributed to the effort in lowering down the incidence of malnutrition in Eastern Visayas.
In an awarding ceremony at Patio Victoria, this city, the NNC honored three towns, one village and two local nutrition workers for their significant effort to save children from the effects of malnutrition.

Selected as recipients of 2014 Green Banner Awards are Tarangnan in Samar and Caibiran in Biliran. However, Bobon town in Northern Samar emerged as the outstanding municipality among the 136 towns in the region in terms of nutrition program implementation based on the result of the Regional Nutrition Evaluation Team (RNET), an inter-agency committee.

“I am grateful for this award in our town and this is adding up to the challenge. We’re not satisfied with what we have been doing in the past years for the welfare of our children,” said Bobon Mayor Reny Celespara in a phone interview.

Green Banner is given to the first ranking town in a province in the region that has been adjudged by the inter-agency regional nutrition evaluation team in recognition of efficient implementation of the Philippine Plan of Action for Nutrition.

Of the 4,390 villages in Eastern Visayas, Sto. Niño village in Maasin City stands out as the best Barangay Nutrition Committee in the region with zero malnutrition incidence this year and sound implementation of nutrition programs in the barangay..

The outstanding Barangay Nutrition Scholar (BNS) award for the province was given to Lanie Ancheta of Cabunga-an village in Tarangnan, Samar and Jennifer Dejesica of Sto. Niño village in Maasin City. Dejesica is also the Regional Outstanding BNS.

“I couldn’t believe that my effort will be recognized by the government. I just did my job of ensuring that no children in our village is undernourished,” said Dejesica, 37, a mother of four.

BNS are tasked to monitor the nutritional status of the vulnerable sector in the community and deliver nutrition and other related services.

“The awarding ceremony is a fitting tribute to the men and women, as well as local government units and local nutrition councils who stood best in the fight against hunger and malnutrition in the region,” said NNC Regional Nutrition Program Coordinator Catalino Dotollo, Jr.

The NNC also recognized the participation of local government units in the monitoring and evaluation of local level planning implementation. These are the towns of Almeria, Naval, Kawayan, Maripipi, Biliran, Culaba, and Cabucgayan in Biliran; Tacloban City, Matalom, and Hilongos in Leyte.

The Special Awards were given to Maasin City for the exemplary implementation of Pabasa sa Nutrisyon; Alvin Manalansan, Nutrition Officer of United Nations Children’s Fund (UNICEF) for his contribution to nutrition programs, and the Department of Social Welfare and Development field office for its support to Nutrition in Emergencies training in various Local Government Units in the region. (PNA)LAP/SARWELL Q. MENIANO with input from mjgotardo