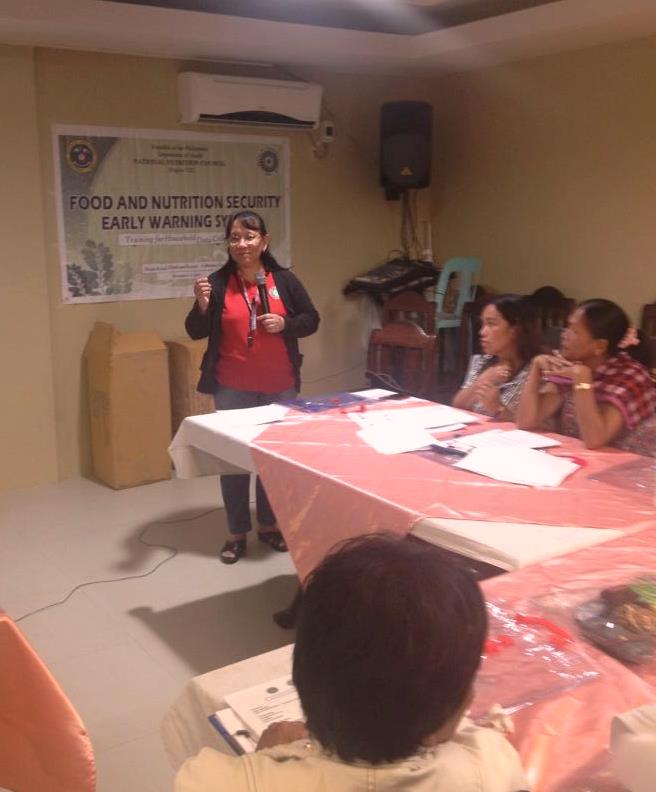 The EWS-FNS is a strategy to capacitate the local government units along nutrition assessment toward achieving food and nutrition security. It further aims to strengthen their capacity for data collection, analysis and interpretation and the use of data for nutrition program planning and decision making. The system enables the communities to act early, based on early warning information available and to counter any threat, natural or human-induced that affects the ability of communities and households to obtain sufficient food.

Before the Household Data Collectors Training for EWS-FNS, a consultative conference was conducted at Hotel Alejandro in Tacloban City on October 22-23, 2015. It was attended by no less than the municipal mayor of Gandara, the Hon. Eufemio Oliva. With Mayor Oliva were selected municipal EWS-FNS core team which was composed of various heads or representative from the offices of Municipal Planning and Development, Social Welfare and Development, Agriculture, Disaster and Risk Reduction Management, Interior and Local Government, Rural Health Unit, Sangguniang Bayan represented by the SB on Health Hon. Beatriz Alvarez and the Nutrition Action Officer Ms. Rolina Oliva.

The consultative conference sets the tone of the series of activities to be undertaken in the implementation of EWS-FNS in the said municipalities. After the consultative meeting, the selected municipal EWS-FNS core group attended a EWS-FNS Training of Municipal Core Team conducted in Cebu City. The training was a prelude to this Training of Household Data Collectors.

As a requirement, five barangays where chosen to represent the entire municipality of Gandara. Among the selected barangays were Concepcion, Sto. Nino, Burabud II, Napalisan and Adela Heights. Three representatives from each barangay were also chosen to attend the training. These include the Punong Barangay, Rural Health Midwife, Brgy. Nutrition Scholars or Brgy. Health Workers or a Community Health Team (CHT) member.  The various topics of the training include Guidelines on Interviewing, the tool which included questions on dietary diversity and household food security, both are answerable with only yes or no. The last part of the tool is on anthropometric assessment. In the anthropometric assessment, the participants who are mostly high school level and some elementary had to undergo the rigors of demonstration and return demonstration, computation and plotting of the results using the Child Growth Standards (CGS) tables.

In the second day and to validate whether the participants were able to absorb the lectures and discussions given by the resource speakers, role play was utilized and a field practicum on interviewing was conducted in one of the barangay of Gandara which is not part of the five barangays mentioned earlier. Processing of the role play and field practicum was done in the barangay.

The training ended with a schedule of data gathering every second week of the first month of the quarter. Data gathered will be validated by the midwife or the Punong Barangay or Kagawad before submitting to the MPDO for encoding and analysis. Data will then be used for subsequent planning.