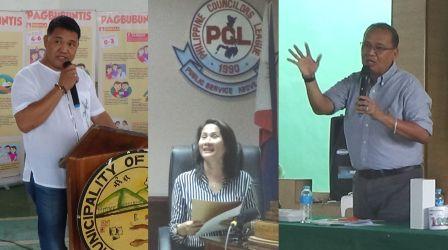 TACLOBAN CITY -- The Harmonized Initiatives of Media for the Spread of Good Nutrition in Region 8 (HIMSoG8), media arm of the National Nutrition Council (NNC) in the region, carried out another Media-Nutrition Caravan to three municipalities of Samar Province noted with high incidence of malnutrition before year 2016 ended.

Together with staff from NNC-8, the media group composed of 10 members coming from tri media outlets stormed the towns of Gandara and Sta. Margarita on the 24th, and the motorboat-only accessible Pagsanghan town on the 25th of November. The Media-Nutrition Caravan is among HIMSoG-8’s nutrition advocacy activities. A gauge to see how a certain locality is doing nutritionally, for example why it is lagging behind, and to document its good practices if it is doing well--for other places to emulate. The activity seeks out the rationale for the Nutrition Situation of the target locality, and to learn how its leaders are managing the situation. Aside from Promotion of Good Nutrition (PGN) through each members’ respective media outlets, the caravan is the favored group-activity of HIMSoG-8 due to its high impact in terms of advocacy, as well as in data gathering.

Through the caravan the nutrition situation of a subject locality can be heard and observed firsthand, through a face-to-face dialogue with the leaders and nutrition managers of the municipality, city, or province. For example, in Gandara, a 2nd class town with 69 component barangays, in year 2015 Operation Timbang (OPT) Plus report was second top in the province of Samar with 26% malnutrition rate, and 23.6% this year. More than 2 points lower already, but still very high incidence for comfort. Gandara Municipal Health Officer (MHO), Dr. Cresilda T. Aguilar bared they are now conducting feeding at schools, immunization, deworming and Garantisadong Pambata. Mayor Eufemio D. Oliva declared they are fighting the problem by intensifying food production among which through inter-cropping of vegetables and food crops with coconut trees; another is that the local government unit (LGU) is currently partnering with private corporations through the Angat Pinoy in order to level-up socially and economically. Meanwhile in the 4th class town of Sta. Margarita that is composed of 36 barangays, for the current year is embattled with 22.2% malnutrition rate. Mayor Gemma P. Zosa said they are currently into supplemental feeding of 6 months old infants together with the DSWD at Barangay Cauntod, a component village with numerous cases of severely malnourished children. The mayor said they are also promoting planting and gardening to beef-up the town’s food production, and together with TESDA they are training 4Ps beneficiaries on organic farming. And in Pagsanghan, a 5th class municipality composed of 13 barangays in 2015 suffered 29.6% malnutrition incidence, and this year a little lower at 25%. Municipal Nutrition Action Officer (MNAO) Vedasto Milca Jr. disclosed that the LGU is now into organization of Breastfeeding Support Groups, and conducting prenatal and supplemental feeding of pregnant women. In Villa Hermosa Oriental and Occidental, Pagsanghan they were conducting milk feeding of 2 years old children and up. And to really persuade the villagers to help fight malnutrition, starting year 2017 the LGU will be awarding incentives of P5,000 to every village that could achieve zero malnutrition, the MNAO said.

Earlier this year on August 30 to September 1, the Media-Nutrition Caravan visited the towns of Mahaplag on August 30, Abuyog on August 31, and the city of Baybay on September 1, and again on September 9 to the municipality of Hilongos all in the province of Leyte and are pilot areas of the Accelerated and Sustainable Anti-Poverty Program (ASAPP) of the national government. HIMSOG-8, NNC-8 and some members of the Nutrition Regional Technical Working Group (RTWG) and personnel from Department of Health (DoH), through the caravan conducted orientation and launching activities of the Early Childhood Care and Development - Intervention Package (ECCD-IP) for First 1000 Days.