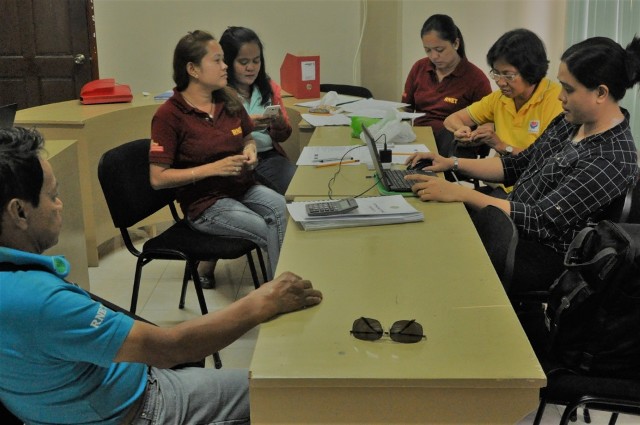 TACLOBAN CITY -- Vice Mayor Lucia L. Astorga of the island-municipality of Daram, Samar said she is keen in knowing where her town stands in terms of nutrition, the reason she was glad the Regional Nutrition Evaluation Team (RNET) has chosen Daram for a Monitoring and Evaluation of Local Level Plan Implementation (MELLPI).
The RNET headed by Jennibeth Cañete with Ayra Mae Simborio and Sharmie Nicole Tansingco all from National Nutrition Council Region 8 (NNC-8), and Harmonized Initiatives of Media for the Spread of Good Nutrition in Region 8 (HIMSoG-8) represented by President Tony C. Pueblos and Vice President Jacob C. Gadaingan visited the 3rd Class municipality on May 30-31, 2017 for the conduct of MELLPI.

Vice Mayor Astorga is the mother of incumbent 26-year old Daram Mayor Philip Astorga, a dentist by profession. The young mayor took over reigns of the island-town after three terms of mayoralty by his mother. And both of them are concerned of the news that Daram Island, based on year 2016 OPT (0-71 months children), ranks 13th on prevalence of underweight at 14.89%, 13th on stunted at 23.2%, and 18th on wasted at 5.4% in the province of Samar.

It was learned that this municipality has allotted P2.63 million for nutrition from its municipal budget of P101.396 million or 3.25% of the total budget; that there are ongoing Nutrition Programs in the locality albeit not documented; despite no existing local nutrition action plan (LNAP), the local government unit (LGU) is taking initiative to implement the programs; and that the MNC is committed to deliver and implement nutrition programs and activities.

In regards to LNAP it was recommended for the MNC to formulate the annual LNAP as basis for program implementation monitoring and evaluation; that said LNAP has to be approved by the local chief executive (LCE) for adoption and integration in the municipal development plan.

During a HIMSoG Nutrition-Media Caravan to this island on July 12, 2011 of which during that time Vice Mayor Lucia Astorga was then the town mayor, the municipality of Daram ranked only 17th in the provincial standing at 21.98% prevalence rate (based on 2010 OPT). Topnotcher that year was Tarangnan with 36.93% and in second was Matuguinao with 36.5%.

Daram became a HIMSoG's choice stop-over for Media Caravan due to its good practices worthy of emulation. Among them: giving  priority to health and nutrition of its constituents, opening up to several partners in adopting numerous interventions to uplift the nutritional status of the constituents--among them Zuelig Family Foundation that focuses on health and the Plan Philippines that focus on children. (Jack C. Gadaingan)