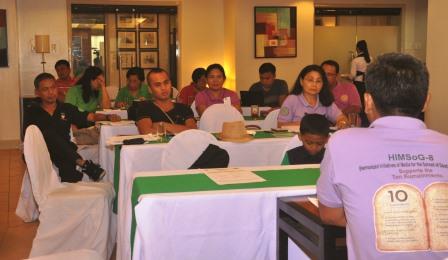 TACLOBAN CITY -- The “Harmonized Initiatives of Media for the Spread of Good Nutrition in Region 8” (HIMSoG-8), under the leadership of President Antonio C. Pueblos, DYOG – Calbayog manager, has set two Media-Nutrition Caravans for the remaining period of 2015.

Already into its 5th year, HIMSoG-8 which was given life by National Nutrition Council Region 8 (NNC -8) on August 27, 2010 is the media group partner of the nutrition agency in the fight against hunger and in Promotion of Good Nutrition (PGN) in the region, through media power.

The caravan is among HIMSoG’s nutrition advocacy activities --a measure to see how a certain locality is doing nutritionally, for example why it is lagging behind in health and nutrition, and to document its good practices if it is doing well, for other places to emulate. The activity seeks out the rationale for the Nutrition Situation of the target locality, and to learn how its leaders are managing the situation.

Aside from PGN through the respective media channels of each member either in print, radio and TV broadcasts, and social media--the caravan is the favored group-activity of the members due to its high impact on advocacy, as well as in data gathering. Through the caravan the nutrition situation of the locality can be heard and seen firsthand, and be face-to-face to dialogue with the leaders and nutrition managers of the municipality, city or province.