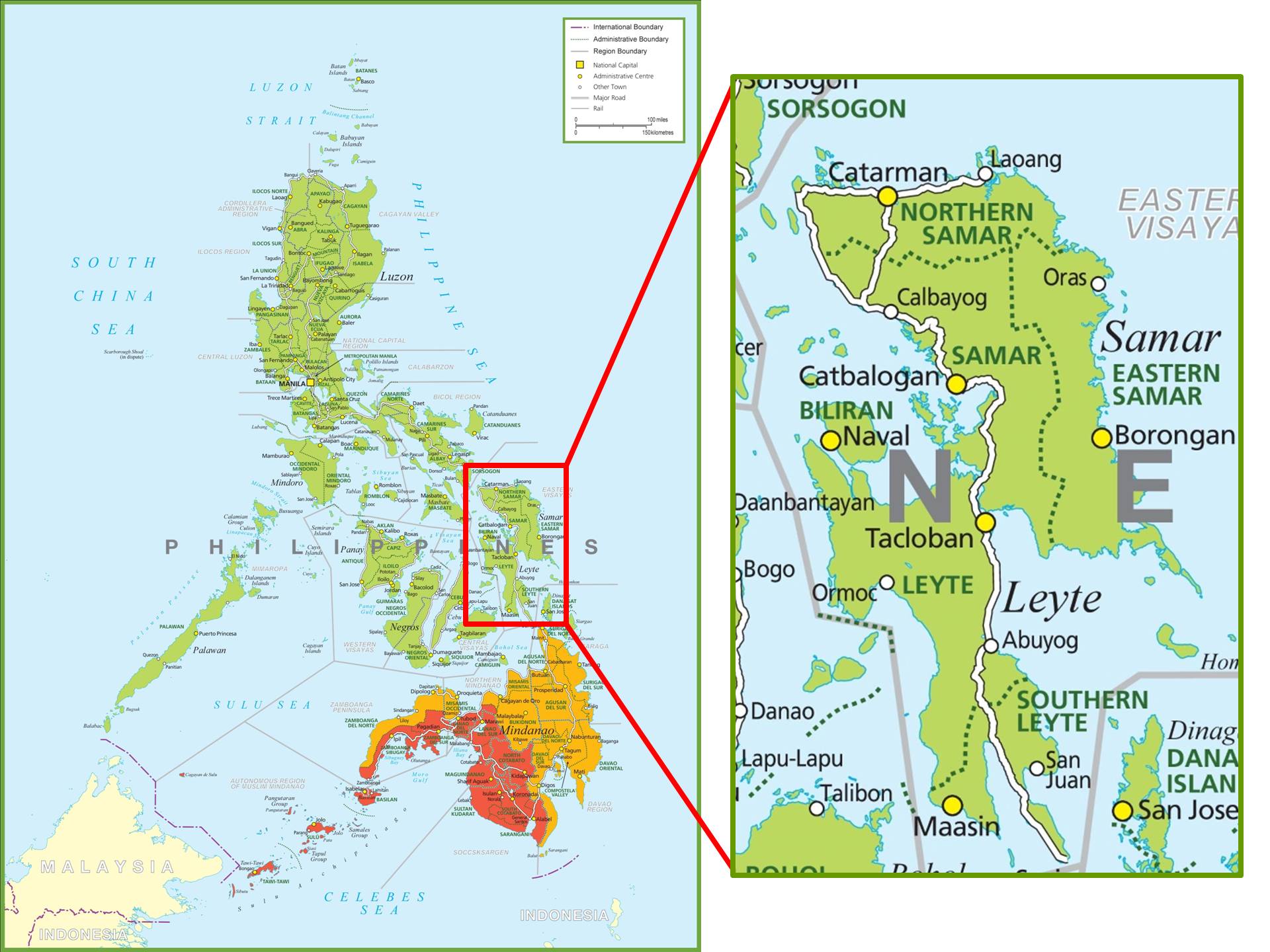 Eastern Visayas encompasses the two large islands of Leyte and Samar, the province of Biliran and several minor islands. This region is the eastern boundary of the Philippines. The San Bernardino Strait separates Eastern Visayas from Luzon in the southeast while the Surigao Strait separates the province of Leyte from the northeastern part of Mindanao. The Visayan and Camotes Seas separate the region from the rest of the Visayas. On the east, the region faces the Pacific Ocean. The San Juanico Strait separates the islands of Samar and Leyte. The terrain of the two large islands is entirely different. Leyte has a high peaked mountain mass in the interior while Samar has low rugged hills interspersed with valleys.

Region VIII is inhabited by the Waray-Warays, the country’s fourth largest cultural linguistic group. Cebuanos from the nearby island of Cebu live in Ormoc City, Western Leyte and parts of the Southwest of Leyte.

The eastern portion of the region is frequently visited by storms from the Pacific Ocean. The region receives heavy rainfall throughout the year with no pronounced dry season.

The region’s sea and inland waters are rich sources of salt and fresh water fish and other marine products. It is one of the fish exporting regions of the country. There are substantial forest reserves in the interiors of the islands. Its mineral deposits include chromite, nickel, clay, coal, limestone, pyrite and sand and gravel. It has abundant geothermal energy and water resources to support the needs of medium and heavy industries. 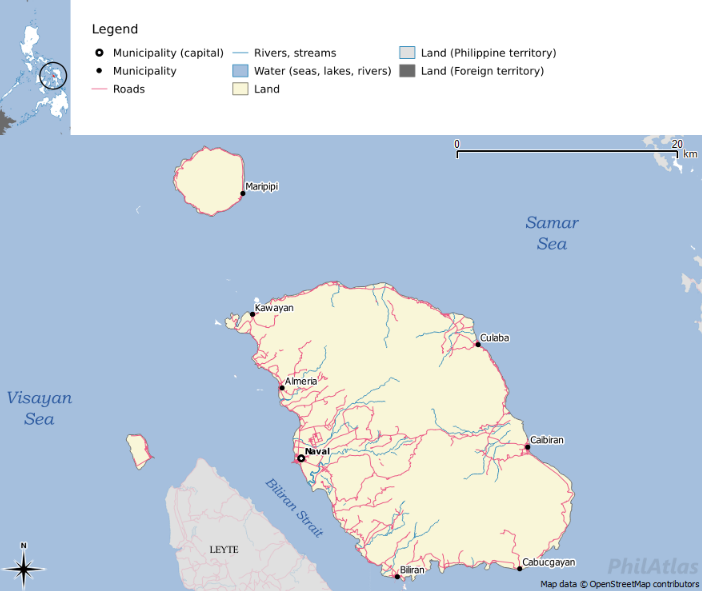 Biliran is one of the smallest provinces in the Philippines. It was formerly a sub-province of Leyte but it became a regular province on May 11, 1992 after a plebiscite was conducted in accordance with R.A. 7160.

The Biliran island lies between Northern Leyte and Samar. It is bounded by the Visayas Sea on the north, by the Carigara Bay on the south, by the Samar Sea on the east, and by the Biliran Strait on the west.

The province of Biliran consists of 8 municipalities and 132 barangays, with Naval as its capital town. Northern Samar is a province in the Eastern Visayas region which occupies the entire northern portion of Samar Island. It is bounded by the San Bernardino Strait on the north, Samar province on the south, the Philippine Sea on the east, and Samar Sea on the west.

The province of Northern Samar consists of 24 municipalities and 569 barangays, with its capital town named Catarman.

Northern Samar is known for its natural rock formations found in Biri Island and white silky beaches in San Jose and Lavezares. Samar Island is situated southeast of Luzon. It occupies the northernmost part of Eastern Visayas and the province itself occupies the southwestern part of Samar Island.

The province consists of 24 municipalities and 2 cities. Its provincial capital, Catbalogan City, is located 107 kilometers from Tacloban City, the regional capital of Eastern Visayas. 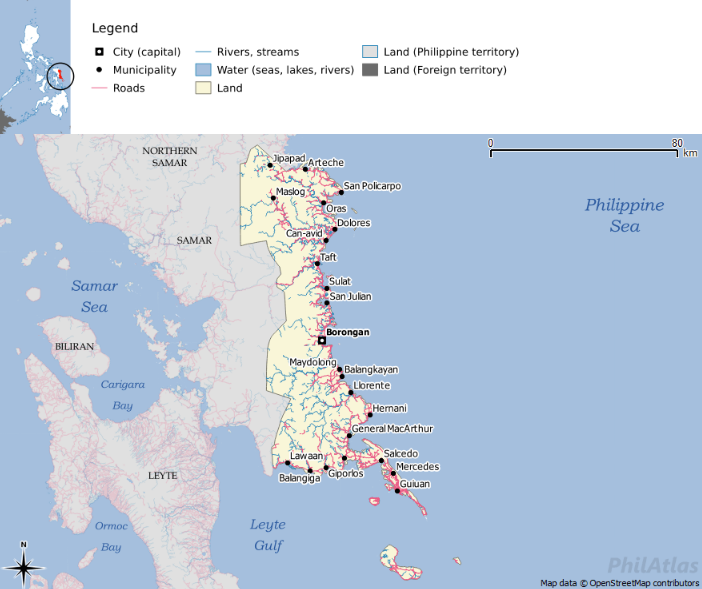 Eastern Samar, one of the six provinces in Eastern Visayas, is located in the eastern part of the island of Samar. The province is bounded on the north by Northern Samar, on the west by Samar, and on the south by the Leyte Gulf. The entire coast of the province faces the Philippine Sea which forms part of the Pacific Ocean. 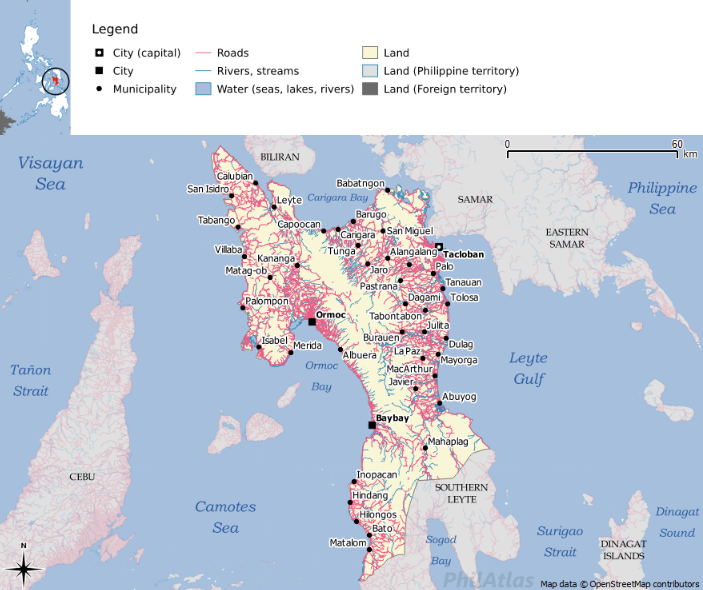 Leyte province consists of 40 municipalities and 3 cities. The cities of Leyte are Tacloban, which is on the eastern shore at the northwest corner of Leyte Gulf, and Ormoc City and Baybay City, which are on the western coast. 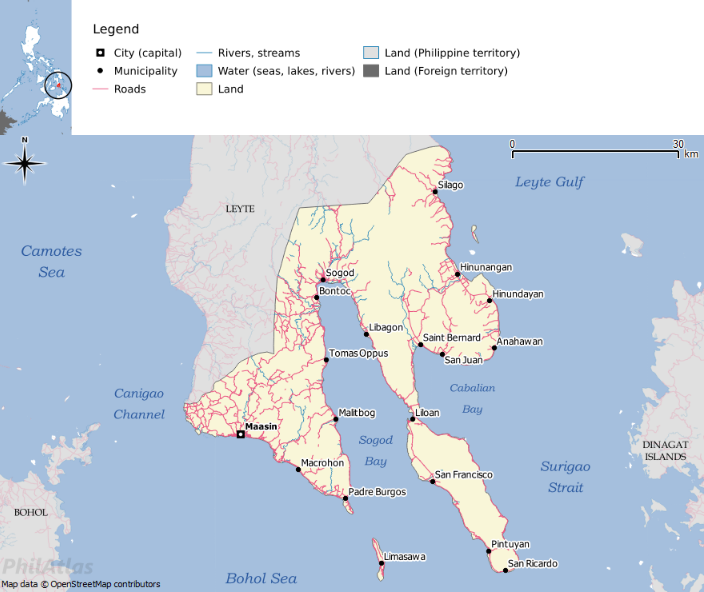 Southern Leyte, one of the six provinces of Eastern Visayas, is bounded on the north by Leyte Province, on the south by Mindanao Sea, on the east by the Pacific Ocean and on the west by the Visayas Sea.

The province also includes the island of Limasawa which is said to be the birthplace of Roman Catholicism in the Philippines.