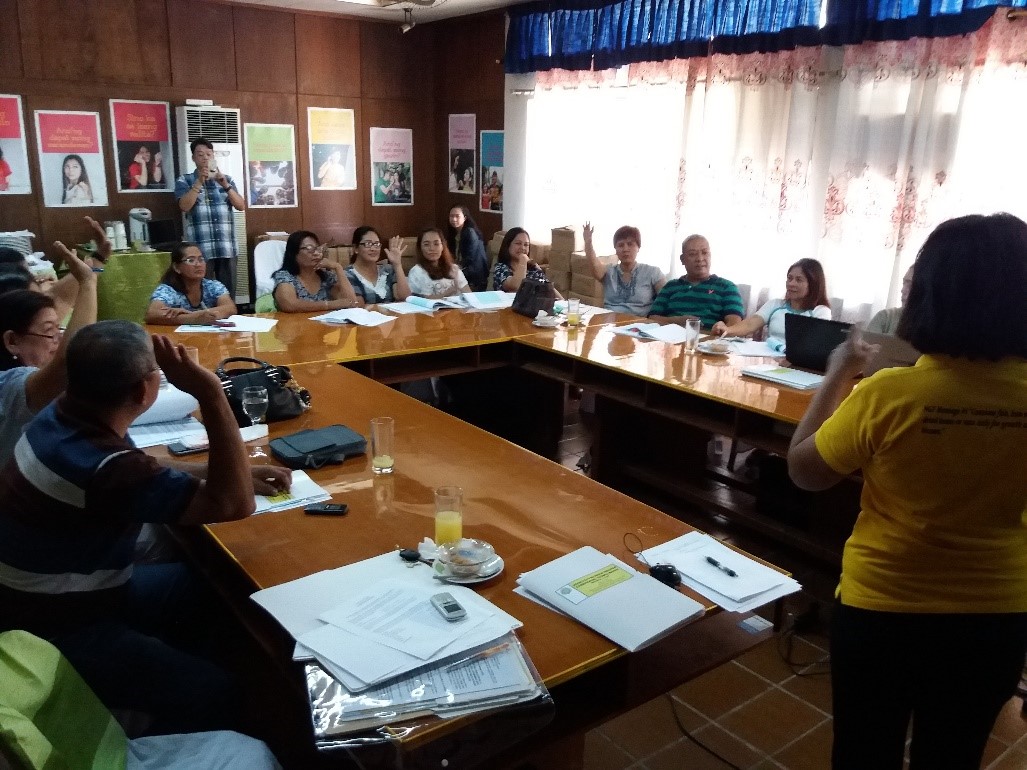 DNPC Rich enthusiastically motivated to iron out the associations SEC registration, mobilization of resources and active participation on nutrition program implementation. She encouraged the associations officers and board members to be united and share capacities in combating the challenges of the association.### 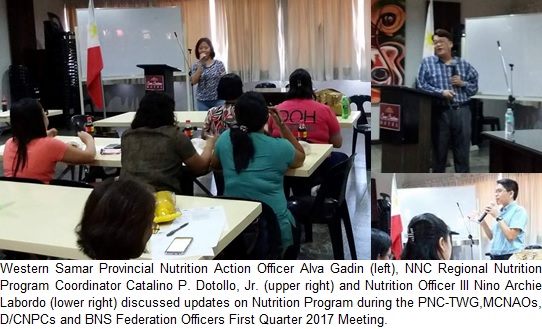 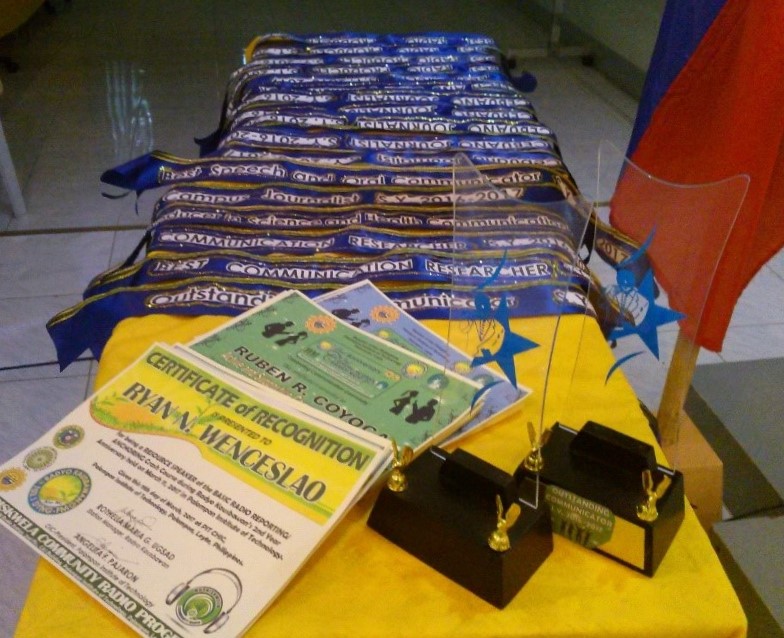 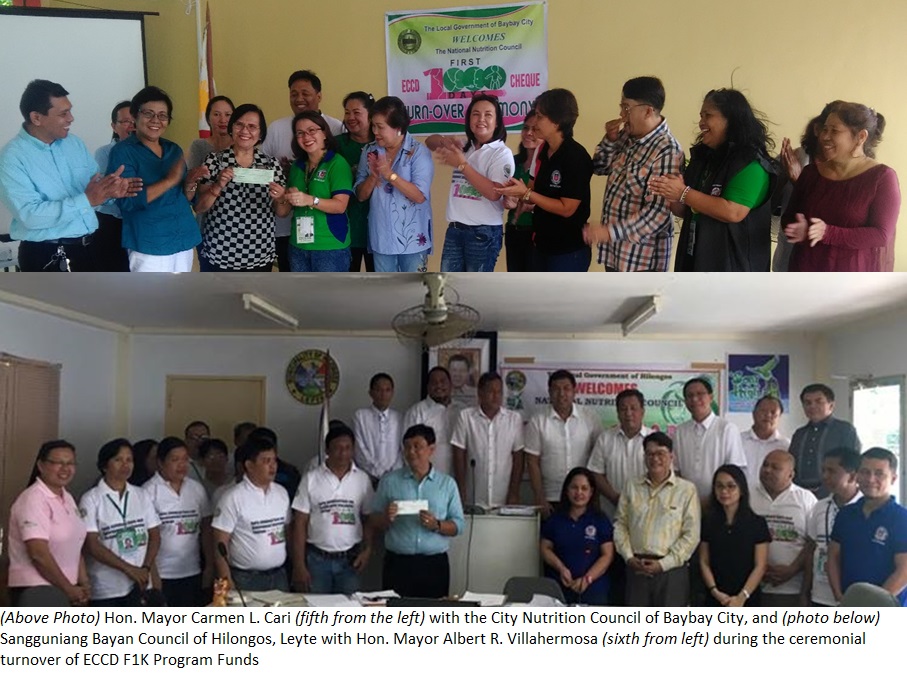 National Nutrition Council (NNC) and some members of the Regional Technical Working Group (RTWG) on Nutrition hand over program funds to four Local Chief Executives (LCEs) in Leyte under the Early Childhood Care and Development in the First 1000 Days (ECCD F1K) Program on April 10-12, 2017 in the Municipalities of Hilongos, Abuyog, Mahaplag and Baybay City in Leyte Province.

The 2017 Financial Plan for ECCD F1K covers activities for mothers in project areas including Barangay Nutrition Scholars and other health and nutrition workers through trainings, seminars, mother classes and household’s inputs for home food production.

On a turnover of cheque in the City of Baybay, City Mayor and City Nutrition Committee Chair Hon. Carmen L. Cari expressed her profound appreciation to NNC on the big amount intended to improve the city people’s health and nutrition well-being. Mayor Cari together with the City Nutrition Committee received PhP6,442.118.00 million, covering ninety-two (92) barangays in 2017 ECCD F1K program implementation.

The ceremonial turnover of ECCD F1K program funds was graced by Ms. Jana Marie L. Culla, National ECCD F1K Program Coordinator and participated in by the RTWG members to include Department of Agriculture, Department of Health, Provincial Government of Leyte and the Visayas State University (VSU) BIDANI.

RNPC Dr. Catalino P. Dotollo, Jr., in his message, conveyed for the participation and the interagency important role in the success implementation of the ECCD F1K Program. He likewise appreciated the active endorsement of the Nutrition Committees on their respective City and Municipal Nutrition Action Plans (C/MNAPs) which will guide them on the full implementation of the nutrition programs as stipulated in the Philippine Plan of Action for Nutrition (PPAN) 2017-2022.

The ECCD as mentioned in Republic Act 10410, otherwise known as Early Years Act of 2013, refers to the full range of health, nutrition, early education and social services development programs that provide for the basic holistic needs of young children from age zero (0) to four (4) years to promote their optimum growth and development. ###

Ratio of health human resource to population is of high demand in Eastern Visayas as intensively discussed during the First Quarter 2017 Regional Implementation and Coordination Team (RICT) Meeting held on 8 March 2017 at the Conference Room, Department of Health Regional Office VIII, Government Center, Palo, Leyte.
In the DOH VIII 2016 Accomplishment Report, health human resource particularly nutritionist is highly needed to augment the high prevalence of malnutrition in the region. As mentioned there are only four (4) nutritionist occupying an item position at the DOH retained facilities in the region or highlighting to a manpower to population ratio of 1:1,093,869.
DOH VIII Director and Chair of the RICT, Dr. Minerva P. Molon said that health human resource is a challenge in achieving health targets in the region. However, the deployment of nurses through the Nurses Deployment Program (NDP) augments in most cases the government’s health programs implementation. Strengthening the collaboration with the local government units to supply manpower especially the Barangay Nutrition Scholars can be one of the strategies.
In the 2015 DOST-FNRI Updating Survey, Eastern Visayas plagued with the highest prevalence of stunted (height/length for age) children under five years old at 41. 7% while wasting (weight for height/length) is at 8.4%. The high prevalence of malnutrition is noted most at geographically isolated and disadvantaged areas (GIDAs) where food insecure households are found.
The DOH RICT Committee meeting intends to abreast, discuss and resolve issues concerning health. ###

Breastfeeding as the Best Remedy 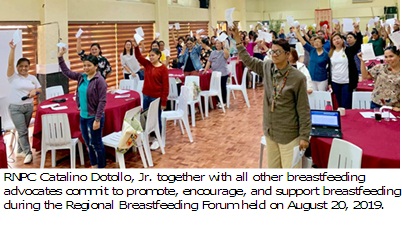 “Continued breastfeeding was our sure management instructed to mothers”, this was the first intervention advised to lactating mothers by Mr. Levi Sison, Public Health Nurse and Officer-in-Charge of the Rural Health Unit of Motiong, Samar during the diarrheal outbreak in Brgy. Maypange in said municipality.

As of 10 March 2017 a total of 215 claimed to manifest abdominal pains and diarrhea after residents come together and celebrate their founding anniversary and partake packed foods on 22 February 2017. Of this count, around 15 individuals were under five years old.  Lactating mothers were advised to continue breastfeeding as this is the only safe food they can provide to their babies.

10 Kumainments number 2, and as mandated in Executive Order No. 51 or the Milk Code, encourages mothers to exclusively breastfeed their child and not use any other milk substitutes. Breastfeeding is vital on an infant’s growth and development. Further, studies show that it is more nutritious and economical compared to processed milk.

In an NNC VIII visit on 14 March 2017, Mr. Sison calmly describe the situation under control. However, continued advocacy is being done on safe preparation, storage and delivery to ensure good nutrition and prevent food borne diseases. ###