Tagum City as the seat of Davao del Norte’s provincial government. Since the 1980s, the city has gained traction in urbanization and industrialization whilst continually nurturing its agricultural sector – as an inland city with a coastal area. Tagumeños were able to ride the waves of modernization; but despite this economic development, the city government acknowledges that its human resource is the most important sector to be developed. Tagum has proven that being the most populous component city in Mindanao is not a hurdle even if it holds an equally heavy responsibility in taking care of huge number of residents. Rather, it has become the city’s course of action to provide more opportunities and accessible services for its people to thrive.

True to the city’s Vision-Mission of providing a better quality of life to its empowered citizens through sustainable and inclusive growth and development made possible by good governance, Tagum City remained unwavering to its pride of being #TeamTAGUMpay as they emerge victorious in bringing home the highest national award for their consistent and exemplary performance in nutrition program management. None of these would have been possible if not for the effective and functional team that drives this success: the City Nutrition Committee (CNC) chaired by Mayor Allan Rellon, with utmost assistance from City Nutrition Action Officer (CNAO) Mr. Jan Dmitri Sator. Tagum is definitely on the right track for investing in the health and nutrition of its constituents.  As defined by the World Health Organization (WHO), health is a state of complete physical, mental, and social well-being and not merely the absence of disease or infirmity. Thus, Tagum City not only cater to the ill citizens but has also high regard in promotive and preventive approach in health. Wellness, sports, and health are given priority as stipulated in Tagum’s 10-point agenda – EAGLE WINGS1. This is strongly vouched for by the goals set by the City Health Office (CHO) and the City Sports and Development Office (CSDO): “Physically Fit. Emotionally Stable. Mentally Healthy.”  Programs for physical fitness are also offered to athletes and any interested Tagumeño.

Tagum has certainly lived up to the adage that there is always room for improvement. As if the city’s previous nutrition efforts were not enough, the CNC yet again found innovative ways of refining its armory against malnutrition while concurrently championing nutrition awareness. One of the prodigious nutrition interventions of the city is its plight in completely eradicating acute malnutrition, both moderate (MAM) and severe (SAM), in children under five years of age. The LGU of Tagum capacitated each of the 23 barangays with a health facility and trained human health resource to provide appropriate management for both MAM and SAM cases. By the end of 2019, there was a 94% reduction in total end cases of MAM and SAM: undeniably a remarkable feat of the city.

Another nutrition banner program of Tagum in 2019 is its Infant and Young Child Feeding (IYCF) initiatives. In partnership with non-government organizations, the city focused on promotion and capacity building for IYCF by fully utilizing multi-media platforms and conducting IYCF trainings to health and nutrition workers.  A City Breastfeeding Committee was also created to formulate and implement guidelines in the monitoring of EO 51 (The Milk Code) and other breastfeeding-related laws. Furthermore, Breastfeeding Support Groups in barangays were reactivated to strengthen promotion of breastfeeding practices in the community. 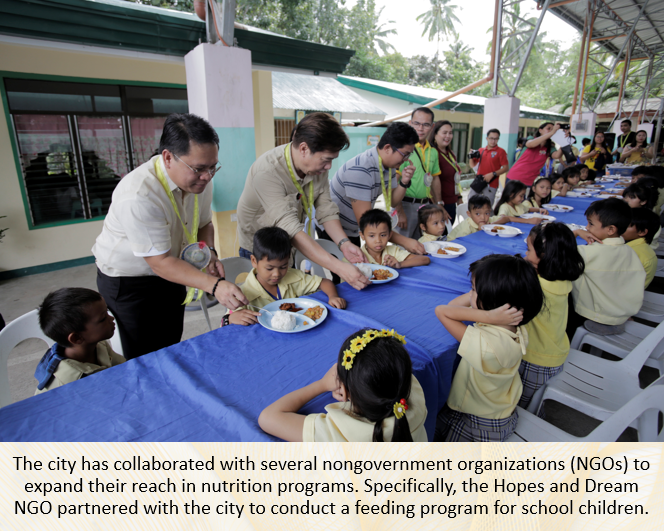 The CNC also conducted activities to promote positive nutrition behaviors and perspective among Tagumeños. During the 2019 Nutrition Month celebration, all 23 barangays actively organized their own culminating activities. The CNC itself kicked-off the celebration through a nutri-walk dubbed as “Piso Walk Campaign for Nutrition” that aimed to generate funds to supplement feeding programs in their respective daycare centers. Tagum also carry out dietary supplementation programs to address the nutritional gaps and improve the nutrition status of beneficiaries from various age groups, which are the nutritionally-at-risk pregnant women, infants, and young and school children. Aside from the nutrition-specific programs, there are also various nutrition-sensitive programs implemented including 1) strengthening of food production, 2) increasing market accessibility and availability of nutritious foods, 3) expanding and full maximizing fully utilizing the City Nutrition Committee, 4) and establishing a referral system for multi-sectoral collaboration. 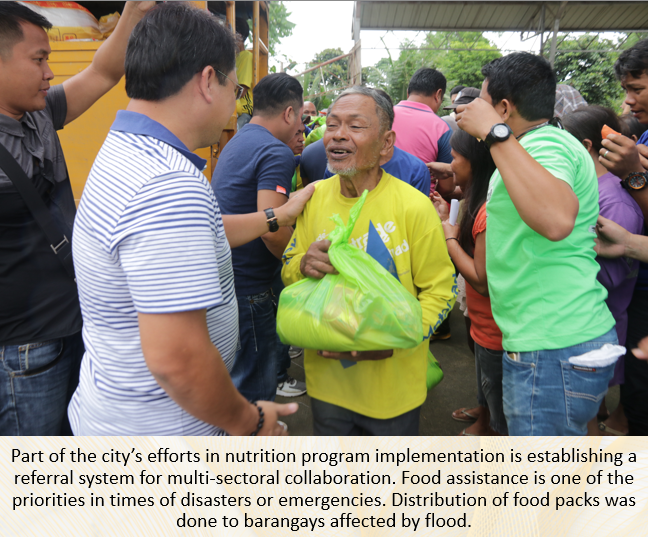 Indisputably, the city is to be applauded for its outstanding nutrition performance. Time and again, Mayor Rellon is firm with his stand that the thrusts towards modernization, industrialization, and development of the city government are all useless and worthless if the people are ill and unhealthy. It seems like there really is no other way for Tagum City but up as it rises to be one of the 2019 Nutrition Honor Awardees. The rest of the LGUs can surely pick-up a lesson or two from the city’s nutrition prowess. Tama nga ang balita, nasa Tagum ang tagumpay!