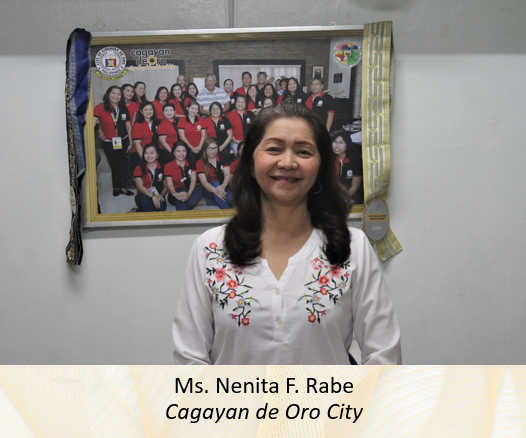 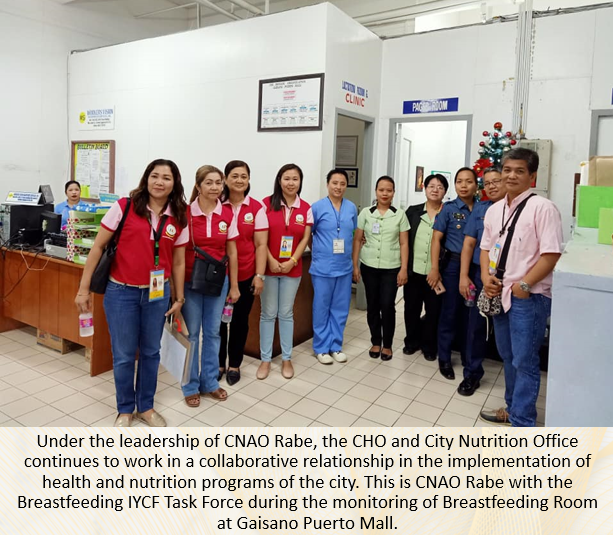 It was in 2013 when a change in administration through the leadership of Mayor Oscar Moreno, the incumbent mayor, and current Chairperson of the City Nutrition Committee, wanted to further improve the health and nutrition situation in CDO. This is when the actions of City Health Office (CHO) and City Nutrition Office were better harmonized and cooperation between the two separate offices were maximized. As a start, Ms. Rabe, as part of CHO, first became a member of the Regional Nutrition Evaluation Team where she saw how local nutrition offices operated and the differences between the work of the CHO and City Nutrition Office. From there, she witnessed that the City Nutrition Office works closely with the Barangay Nutrition Committees, unlike in CHO where she monitored DOH programs. Because of her years of experience, Ms. Rabe was eventually tasked to handle the management of nutrition programs of the city, despite being under the CHO. After more than 30 years of being a Nutritionist-Dietitian of the City Health Office, Ms. Rabe officially took over being the CNAO when she applied for the position upon its vacancy in 2017.

The 61-year-old CNAO, a registered nutritionist-dietitian by profession, holds a full-time plantilla position as Nutrition Officer IV since February 2017. She took up Masters in Public Administration and is also currently the auditor of Region X Nutrition Action Officer’s Association of the Philippines (NAOPA). Through the years, she has completed numerous training courses related to nutrition, such as Training of Trainor’s Barangay Nutrition Scholar (BNS) Basic Course, Nutrition Program Management, Nutrition in Emergencies and Information Management and many more. 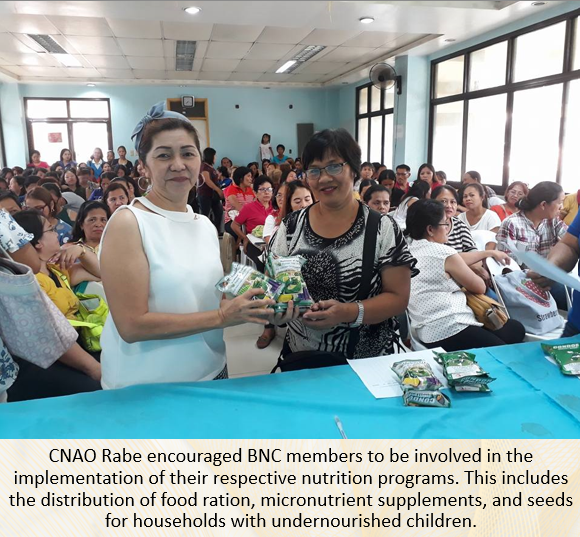 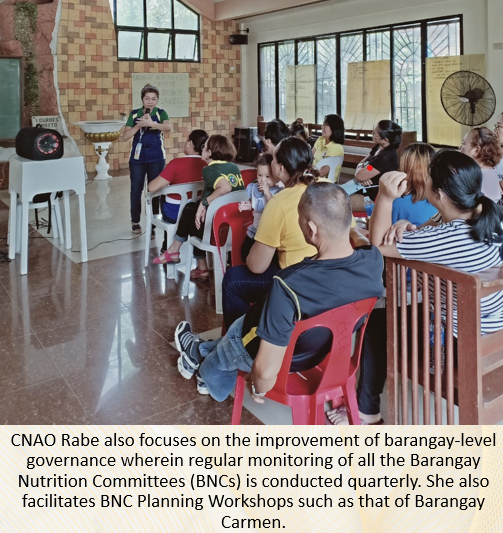 CNAO Rabe focuses on the improvement of barangay-level governance wherein regular monitoring of all the Barangay Nutrition Committees (BNCs) of CDO is conducted quarterly. She further emphasized the importance of training her City Nutrition Program Coordinators (CNPCs) so they are capacitated similar to a CNAO. The awardee believes in the significance of capacitating nutrition workers to better implement nutrition programs in their respective areas of assignment. In fact, her activities that lobby for support of BNCs to the nutrition projects and to the Barangay Nutrition Scholars (BNSs) received high participation rates. In some instances, she encouraged for the involvement of the other BNC members in the conduct of nutrition programs such as distribution of food ration and micronutrient supplements, among others. In addition to this, she was also able to secure various support for BNSs from the LGU and barangay levels such as increase in honorarium, opportunities for employment in the LGU, incentives for good performance, and many more. Just like in the national and regional level, CDO conducts the Monitoring and Evaluation of Local Level Implementation (MELLPI) in their city as headed by CNAO Rabe. The conduct of MELLPI serves to ensure that the local nutrition programs of the BNCs of CDO are efficient and effective. With the close involvement of the members of the City Nutrition Committee as the City Nutrition Evaluation Team (CNET), BNCs are evaluated and improved. To cap it off, the CNET also conducts follow-up monitoring for barangays with low performance during the city MELLPI to ensure that the recommendations are followed, and programs are improved. Moreover, under the leadership of CNAO Rabe, the CHO and City Nutrition Office continue to work in a collaborative relationship in the implementation of health and nutrition programs of the city of CDO.

This kind of strategy in the management of nutrition programs helps ensure that the gains and positive outcomes of the city will be upheld. Indeed, the maintenance of low malnutrition rates paired with sustainable nutrition program management strategies of Cagayan de Oro City Nutrition Committee and CNAO Ms. Nenita Rabe deserves to be conferred with the 2019 National Outstanding City Nutrition Action Officer award.