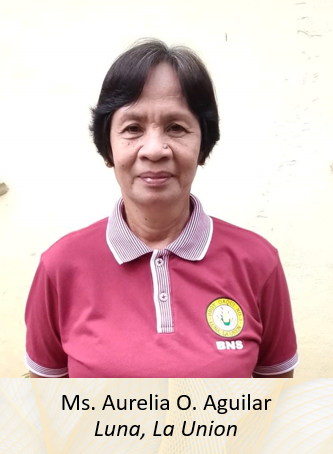 It was not long enough when BNS Aguilar rose the ranks and was hailed as Provincial Outstanding BNS and 4th runner-up Regional Outstanding BNS in 2007. This goes to show how she learned to love her work, dedicating her time and effort regardless of the small amount of honorarium barangay volunteers receive. In 2009, she was elected as Municipal BNS President and is still incumbent to this date.  She has been trained on the Basic Course for the BNS in 2014, and most recently on “How to Start Your Own Business” and “Retooling Workshop for Barangay Population Volunteers/ Workers on Responsible Parenthood and Family Planning Program” in 2019, among others. 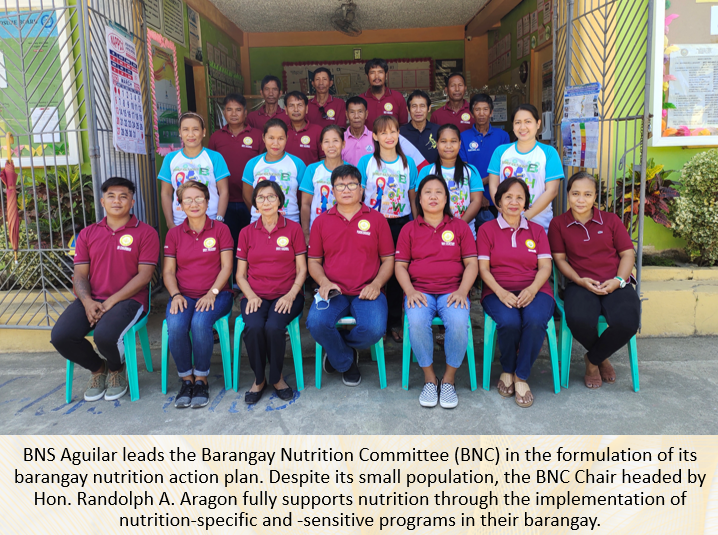 Despite its small population, the Barangay Nutrition Committee (BNC) headed by Hon. Randolph A. Aragon fully supports nutrition through the implementation of nutrition-specific and -sensitive programs. BNS Aguilar also leads the BNC in barangay nutrition action plan (BNAP) formulation with corresponding budget allocation, conduct of OPT Plus and family profile survey, and spot map creation. Regular BNC meetings are also held to assess the barangay’s nutrition situation, and plan, implement, monitor, and evaluate the nutrition programs accordingly. Through the BNC’s commitment, support, and assistance, numerous nutrition programs were implemented in their barangay. 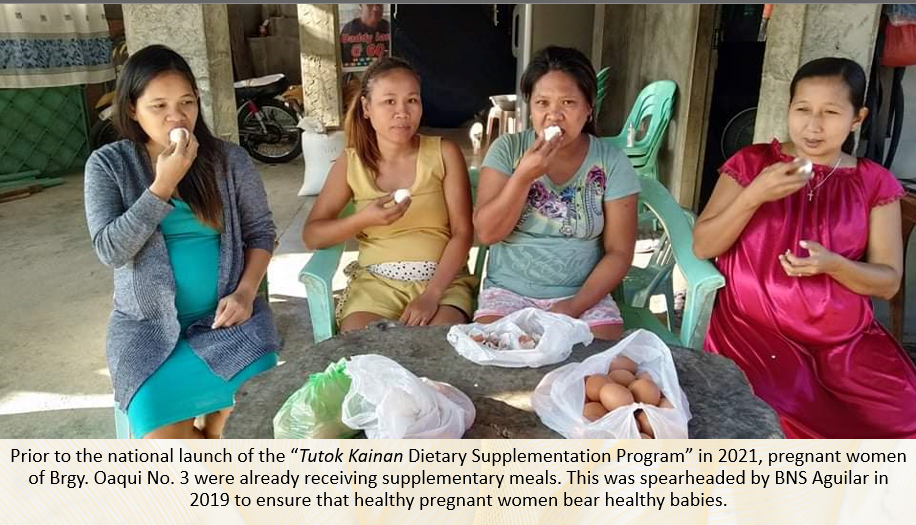 To start, Pabasa sa Nutrisyon was conducted to mothers of preschoolers who are borderline malnourished. Graduates of the class were even organized as a Breastfeeding Support Group with corresponding areas or puroks of assignment for counselling. House to house visits is also done frequently to encourage pregnant women to visit the health center for their pre-natal check-up, promote proper Infant and Young Child Feeding (IYCF) practices and use of Pinggang Pinoy, and conduct follow-up weighing for 0-23 months old children. Also, aside from the usual distribution of IEC materials, BNS Aguilar initiated to put up 10 Kumainments billboards in strategic locations in the 7 puroks, a unique way to promote good nutrition to the public. Moreover, instead of the usual dietary supplementation program for child development learners, pregnant women were already beneficiaries prior its national launch also known as “Tutok Kainan Dietary Supplementation Program”.

Further nutrition-specific programs have also been accomplished, including promotion and monitoring of iodized salt, fortified cooking oil, rice, and flour and other food items with Sangkap Pinoy Seal in households and sari-sari stores. BNS Aguilar also assists in the conduct and distribution of micronutrient supplementation to pregnant and lactating women, and preschool children. Weight management intervention for overweight and obese individuals have also been conducted through Zumba, cycling, and fun run activities. This goes to show that she openly caters to all her ka-barangay’s health and nutrition needs, no matter the age and wealth status. 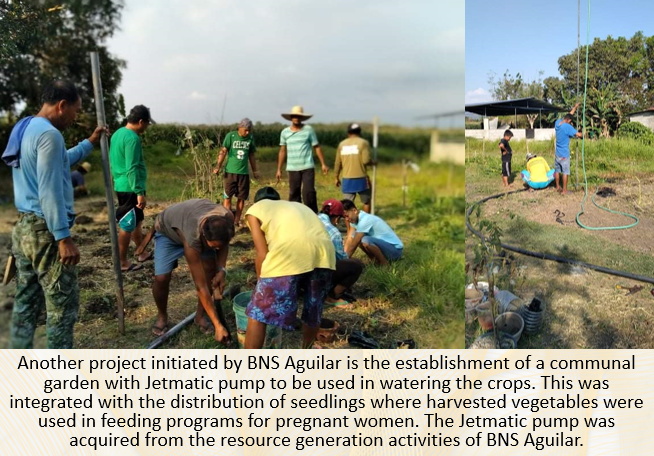 In terms of nutrition-sensitive interventions, seeds and seedlings were distributed to families with pregnant women and infants, and small animals were provided to other vulnerable families and Pantawid Pamilyang Pilipino Program (4Ps) beneficiaries of the Department of Social Welfare and Development (DSWD). She has also been invited to discuss nutrition to the 4Ps family development sessions. Other projects initiated by BNS Aguilar is the establishment of a communal garden with Jet Matic pump to be used in watering the plants. This was integrated with the distribution of seedlings where harvested vegetables were used in feeding programs for pregnant women.

Ultimately, to sustain these programs, financial support is needed. BNS Aguilar did not solely rely on the barangay funds but initiated doormat and potholder, dishwashing liquid, and dustpan making as resource generation activities to increase funding for the barangay’s health and nutrition projects. Two units of high-speed sewing machines have even been purchased from the generated funds to increase production of the sown products.

Through her effort and dedication, and with the full support of the BNC and its constituents, zero malnutrition was sustained from 2018 to 2019. The programs implemented were effective in preventing malnutrition and achieving the barangay’s vision of “an economically stable community with morally upright, healthy and happy families”. BNS Aguilar continues to bring pride and joy to her barangay not only as the Regional Outstanding BNS and finalist in the nationals in 2018 but as the 2019 National Outstanding Barangay Nutrition Scholar.